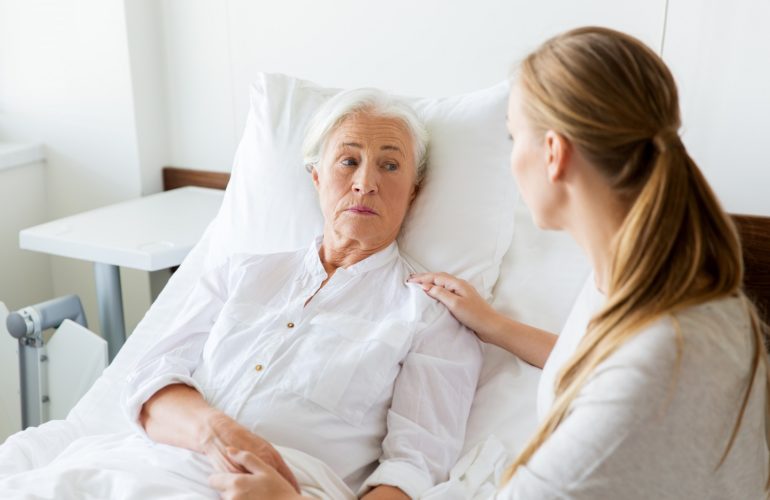 Terminally ill people are facing devastating financial hardship and debt because of a “made up policy fudge” created three decades ago, a new report has revealed.

The damning inquiry report from the All Party Parliamentary Group on Terminal Illness found that the current benefits system rule that you must only have six months or less to live to get fast access to benefits is ‘outdated, arbitrary and not based on clinical reality’.

Information uncovered during the inquiry shows that the current ‘six-month rule’ definition of terminal illness, used extensively to determine how quickly someone gets access to benefits, was invented by politicians, and has no clinical evidence to support its use.

The ‘six-month rule’ was introduced into the benefits system in 1990 to exempt terminally ill people from having to wait to qualify for Attendance Allowance, a specific benefit which could only be accessed if someone was ill for a minimum of six months.

However, the six-month timescale was then extended arbitrarily to other benefits over time, as well as rules for accessing a terminal illness lump sum in pensions law.  Consequently, the ‘six months rule’ became the benefits system’s definition of terminal illness by default.

Commenting on the report’s findings, Drew Hendry MP, Chair of the All Party Parliamentary Group for Terminal Illness, said: “The current rules seriously restrict access to vital financial support for many terminally ill people, whose condition will never improve and only deteriorate until they die, but who may live for longer than six months. The policy is not only very hard on people living with terminal illnesses, it also causes a great deal of financial pressure and worry on their families at the very worst time in their lives.”

The Department of Work and Pensions’ (DWP) processes were also heavily criticised for being “overly-time consuming, demeaning and insensitive”.

The inquiry heard how families can end up building a ‘debt legacy’, due to problems accessing benefits.   One bereaved husband commented: “My wife was terminally ill for over three years – we effectively lost everything we ever worked for and I am now left with debts of over £20,000.”

Many people rely on additional financial support either because they can’t work and to help cope with costs of their condition. Citizens Advice gave an example of a terminally-ill single mother experiencing problems with Universal Credit.  She had recently been forced to stop working due to her illness and had fallen into nearly £3,000 rent arrears, while waiting for a payment and relied on friends and family to get by.

The Brain Tumour Research said that on average, families with a brain tumour patient are nearly £15,000 worse off a year. Similarly, the Motor Neurone Disease Association estimate the financial impact of living with MND is around £12,000 per year and Parkinson’s UK estimate people with Parkinson’s disease lose around £16,000 in income per year on average.

The APPG recommends that the UK government scrap the ‘six-month rule’ and adopt a new definition of terminal illness, based on a new law in Scotland that will allow clinicians to use their own judgment to certify if a person is terminally ill, with no arbitrary time limit. The inquiry found that the medical profession would support this change.

“The inquiry’s findings are clear – the current system is not fit for purpose and the ‘six-month rule’ does not make sense.  Yet, everyday it is making terminally ill people’s lives a total misery, when they should be focused on living well for as long as they can.  Whether somebody with a terminal illness has six months to live or longer, their needs are the same – it cannot be right to deny them access to the financial support they need based on a ‘made up policy fudge’ invented decades ago.

“Marie Curie welcomes the recommendations of the inquiry report.”

“I am very proud of the work Marie Curie and the APPG have done to highlight the impact the six-month rule has on those who are terminally ill, but who may live longer than six months and thank everyone who took time to submit evidence to our inquiry. I hope that the Minister will now give serious consideration to our report findings and commit to ending this arbitrary six-month rule.”

“It is shocking that so many terminally ill people still have to endure bureaucratic hurdles and endless delays when trying to access their benefits, which causes considerable emotional distress for both them and their families.

“The current narrow definition of terminal illness is woefully outdated, highly excluding and, as this APPG report highlights, is based on little in the way of clinical evidence, nor the reality of terminally ill people’s lives. It urgently needs to be updated to ensure that terminally ill people get faster, fairer access to financial support.

“We back this report’s case for change on this crucial issue and we want to see in place a new definition of terminal illness without an arbitrary time limit and based on medical opinion, as introduced recently by policy-makers in Scotland.”