Celebrating a decade of community development in the Midlands 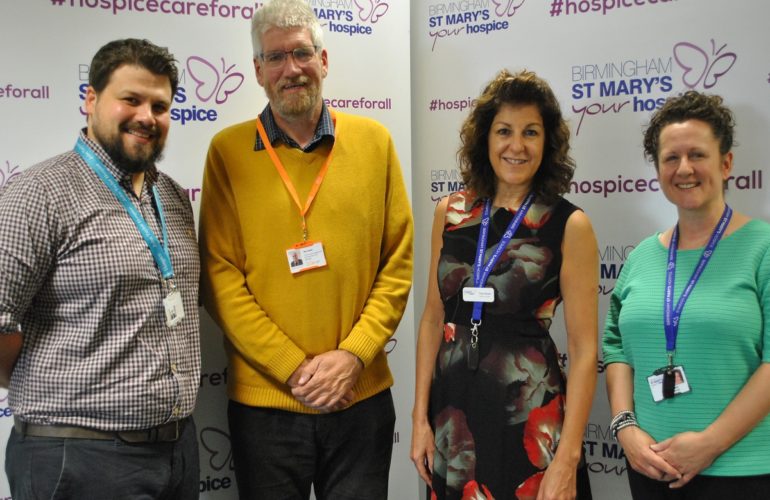 Hospice care, however defined, is at an important phase in its life-cycle; it is no longer only delivered by independent hospices as stand-alone entities.  Education, often from hospices, has led to palliative care being delivered in more settings by a wider range of health and social care professionals. Similarly, care at the end of life has always been part of the community. The definition of hospice care has shifted to define a broader spectrum of palliative, supportive and end of life care through a whole system of partnerships and approaches.

This broader definition recognises the advantages of a public health approach to end of life, where community awareness forms a growing role alongside holistic care delivered by health and social care professionals.

As part of this approach, community development has gained momentum due to growing acknowledgement that professional intervention, whilst it has its vital place during advanced illness and at end of life, if overplayed can disempower and create dependency if it disregards the greater potential of personal and community networks in sustaining wellbeing, dignity and independence during illness, death, dying and loss.

There are many examples of community development that go back further than a decade, but it has taken time for the momentum to gather, as many hospices were focused on the challenges of developing specialist care to respond to growing complexity of need.  This specialism continues to grow while also recognising the role of community development in end of life and palliative care as a speciality in its own right, particularly with growing demand, population longevity and financial constraints in health and social care.

Ten years ago, Birmingham St Mary’s Hospice conducted a study to identify and address barriers to specialist palliative and end of life care and support for black and minority ethnic communities.  Tina Swani, Chief Executive of the hospice says:

“The study clearly demonstrated that awareness was a key feature in changing attitude and myth-busting.  We placed “Reaching People” at the core of the hospice strategy, supported by a community engagement initiative that brought clinicians and diverse community groups together in dialogue.  The term co-design was not in common use at the time.  However, this is exactly what turned our community engagement approach into community development.”

“Community development began with our recognition that knowledge and initiatives currently exist within communities at end of life.  We built upon the desire for communities and professionals to work together to harness and grow this as a combined community asset.  The resulting two-way education and co-production built trust, with more examples of maximising the community role in illness, death, dying and loss.”

“In 2015, with NCPC, LOROS and Sue Ryder, we set out to bring together organisations across the Midlands involved in research and real-time learning with diverse communities and vulnerable groups, to identify where knowledge could be directed strategically for greater impact.”

“Following publication of the National Ambitions for Palliative and End of Life Care 2015-2020 and Ambition Six – “Every community is prepared to help” we reframed this as the “Ambition Six Midlands Think Tank.”

“Back in July 2013 when I was first appointed, I remember receiving several phone calls asking about my role and our wider strategy.  Not easy questions to answer.  We knew we wanted to inform our communities about the work of the hospice, dispel myths and change attitudes around death, dying and bereavement, but that aside, our strategy was very much one of evolvement.  A case of “let us see where this takes us”.”

“In under four years we have engaged with a whole variety of people of all ages across our communities, and we are chipping away at removing the taboo around death, dying and bereavement.”

“For those who wish to have a voice and talk about this, we give them opportunity.  I have been into schools, colleges, local support groups and employers in our catchment area, enabling them to support each other through bereavement in their respective communities.”

“Through our Understanding Bereavement workshops, Advance Care Plan sessions and more recently, our Dying Matters pop up shop, we are giving a wide variety of people the time and space to talk whilst at the same time enabling them to support others.”

“In 2016 the phone calls returned and I was aware that the number of community engagers was continuing to grow.  Alice Spearing and I got talking, and we thought it would be a good idea to get those based in the Midlands together for a network meeting.”

“What transpired was a really positive meeting of like-minded people, all keen to learn and share their ideas.  It was agreed that this group should meet regularly and at different venues.  The network group met again in May 2017 and is open to anyone who works in community engagement and community development even if combined with another role.”

Today, Clinical Commissioning Groups (CCG) also recognise the role of community partnerships at end of life such as the joint launch of the Dying Well Charter Birmingham Pathfinder in 2015, led by Birmingham Cross CCG. This included provider organisations, neighbouring CCGs and the local authority.

After the initial enthusiastic start there was a period of inactivity, and the CCG agreed that a provider-led approach may generate greater activity. This led to Manjula Patel, Murray Hall Community Trust CEO, re-establishing it as the West Midlands Pathfinder Group. Patel says:

“The main aim of the group is to work together to share the concept of Public Health Palliative Care and Compassionate Communities; to share good practice and contribute to engaging communities to increase practical support for people who are living towards the end of their lives. It is very much aligned to the Ambition 6 of the National Framework.”

“It is also a forum to highlight practical approaches, share new publications, articles, research evidence, events and link to the national and International Public Health Palliative Care Association. The membership of the group is open to any organisation or individual who has an interest in public health approaches to death, dying and loss. Recently, many of the members were involved in events and activities for Dying Matters Week in May.”

Pulling it all together

Four Midlands hospices (Birmingham St Mary’s, John Taylor, St Giles and St Richard’s) are now planning a conference that pulls all these strands together with a view to harness the energy to work as one, from local learning to regional impact.

The Community Development in Action Conference will take place on 10 October 2017. Julian Abel, Chair of Public Health & Palliative Care UK will open the conference with speakers and workshops to share learning and experiences from across the Midlands.  It will provide the opportunity to raise awareness of community development in action at end of life, learning from evidence and innovation, and supporting the staff and volunteers involved to achieve more together.