Giving people with learning disability a voice in their palliative care.

It was only in 1997 when Irene searched for articles on the subject that she discovered that no one, globally, had ever written anything about the experience of dying for someone with a learning disability. The article she wrote back then made her an instant international expert in the field and Irene has built on this platform ever since, driven by a firm belief that all patients should be seen as part of the same humanity. In the two decades or so since that first article was published Irene has used her influence, first as an ‘expert’ nurse, then as a PhD and finally as a professor to raise the profile of this patient group and ensure they receive the best possible palliative care.

“My mantra is that if I had a brother with learning disabilities who needed palliative care and they could guarantee they could look after him well, then I would know that they would be able to look after me or anyone else well too. Giving good palliative care to a patient with learning disabilities consistently is your benchmark. If you can do that then you adjust care for anyone who needs it.”

Irene says she knew from the age of ten that she wanted to be a nurse, but had no idea where her career would take her. In brief, she has carved out a unique path, pioneering a new specialism within palliative care and opening professionals’ eyes to the needs of a significant minority.

It was four years living in the L’Arche community in London, immediately after completing her nursing training in the Netherlands, that helped shape Irene’s career. Life in this community, where people with and without intellectual disabilities live and work together in a spirit of equality and mutual respect, gave Irene an insight into the experience of someone with learning disability. Irene says:

“I learned to see people as equals. I really see people as people, whether they have a disability or  are terminally ill. We are all part of the same humanity.” 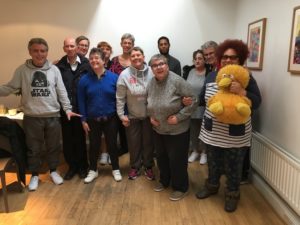 Irene’s talents were then spotted and nurtured by senior colleagues as she moved first into a nursing job at Trinity Hospice in south London, then research and finally into academia at St George’s Hospital, where now, as the first ever Professor in Intellectual Disability & Palliative Care she is overseeing research projects and helping to influence end of life and palliative care for people with learning disabilities in the UK and overseas. Her influence is further extended as chair of the Palliative Care for People with Learning Disability Network and the EAPC Reference Group on Intellectual Disability.

Meanwhile, Irene’s research has led to the development of a new model for breaking bad news, staff training resources, and picture books to help people with learning disabilities.

Irene now combines her twin passions of supporting people with learning disabilities and ensuring equitable access to quality end of life care. She has opened the eyes of many of her professional colleagues to the specific needs of this significant minority patient group, while giving a voice to the patients themselves and enabling them to influence both policy and practice.

Since publishing her first article in the ‘Nursing Times’ over 20 years ago, Irene has worked tirelessly to make the voice of this community is heard and their experiences recognised, as well as to shift attitudes amongst her professional colleagues.

“I think people are beginning to hear what we’re saying because the population is more visible. They make up 2% of the population and it still shocks me how little doctors know about the experience of people living with a learning disability.”

When Irene gave a lecture recently to junior palliative care doctors, she was shocked to discover they received no training in dealing with people with learning disabilities.

“My mantra is that if I had a brother with learning disabilities who needed palliative care, and they could guarantee they could look after him well, then I would know that they would be able to look after me or anyone else well too.” 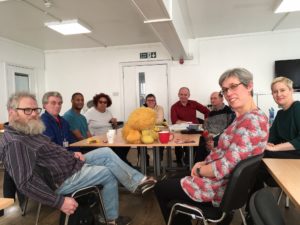 What are the lessons for our profession?

For Irene, it’s the lack of understanding of people with learning disabilities, mostly derived from a lack of training and exposure, that she is committed to helping her colleagues overcome.

“I think training is so important and I would like to see nurses’ training include some work with people with learning disabilities from the very beginning.”

She’s seen first-hand the impact such training can have and is convinced that there’s potential for it to go much deeper.

“I’ve been to one or two of the sessions at St George’s and I was struck by how terrified the students are of assessing anyone with a learning disability. One of the comments afterwards was: ‘Oh, it’s just like talking to a normal person.’ So I think breaking those barriers and getting people to engage is so important.”

Irene believes palliative care offers unique opportunities for nurses and that with a little help they can make a big difference.

“With some support from management you can change the world. Have the idea and then get the management to back you up. I always say at the end of my talks, ‘think of one thing you can do and then do it.’ Palliative care is an amazing discipline because we have more freedom to change things than many others.”

You can make a difference!

A few encouraging words go a long way, as Irene has discovered to her benefit during her long and illustrious career. This is best illustrated by what happened when she was working as a Staff Nurse at Trinity Hospice when she wrote an essay on learning disability and bereavement as part of her palliative care training.

“I wrote a case study and the Director of Nursing read it and said I could become a national expert in this field. That felt amazing to me because I was just a Junior Staff Nurse.”

A short while later, Irene submitted an article to the ‘Nursing Times’ about the experience of dying for someone with a learning disability, a subject she had discovered was completely untapped. “Because I had called the article Palliative Care and Learning Disability, and this was new, I became an overnight international expert and the article was quoted for years. I was quite junior, but the point is that you have to tell people what you are passionate about. Nurses must publish more and write and share what they know because you always know something other people don’t know.”