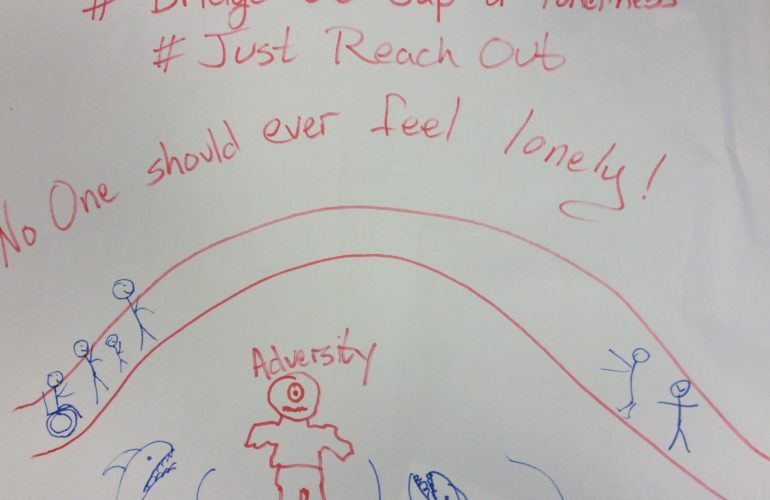 May 25, 2018 | No Comments
Categories: Community Engagement.

Earlier this month 31 staff and 64 Compassionate Neighbours from eight hospices met to celebrate the theory and practice of their work or, in the words of Dr Libby Sallnow, palliative medicine registrar at UCH, ‘to share its beauty and magic’.

Compassionate Neighbours is an award-winning programme, founded by St Joseph’s Hospice in East London, which is being replicated in collaboration with St Christopher’s across seven other hospices. By the end of 2018, and with funding from Nesta to support upscaling, the intention is to have over 700 neighbours in London and the suburbs and to build a robust evidence base to further demonstrate the impact this project has on its local communities.

The programme was first introduced at St Joseph’s ten years ago to replicate the Palliative Care Network in the southern Indian state of Kerala. It is inspired by the concept of Compassionate Communities whose key principles emphasise the collective responsibility of society and community in improving health outcomes.

The conference was opened and closed respectively by a former patient and by a long-term resident of Hackney both of whom endorsed the friendship, energy, sense of purpose and feelings of connectedness they have experienced since becoming compassionate neighbours at St Joseph’s. The theme of ‘ordinary people helping ordinary people’ was subsequently threaded throughout the day after being cited by Alison Bunce as the imperative for her work to create Scotland’s first Compassionate Community in Inverclyde. Inspired by Alan Kellehear and work in Australia and the United States, Alison has been engaging with sixteen local organisations to facilitate initiatives such as No One Dies Alone, High 5 wellbeing programmes with schools, youth clubs and workplaces, and Back Home Boxes,  a ‘community act of kindness’ for people coming out of hospital.

In response to questions about the sustainability of her work, Alison explained that she has no budget other than her salary, on which she is seconded from Ardgowan Hospice, but that the work has developed its own momentum, for example in the use of social media to deploy volunteer companions for those who might otherwise die alone in hospital wards or care homes.

Implementing and sustaining the key components of Compassionate Neighbours was then the focus of discussion amongst hospice staff. Facilitated by Heather Richardson, joint chief executive at St Christopher’s and prompted by reflections from Libby Sallnow and Carrie Deacon, Head of Social Action Innovation at Nesta, discussion focused on emergent learning from the programmes about power, agency and reciprocity.

Running in tandem with this session were opportunities facilitated by Tom Daggett OBE, Organ Outreach Fellow at St Paul’s Cathedral, and Carlos Cortes, visual and performance artist, for neighbours from across the hospices to get to know one another better and to establish new friendships through the medium of music, art and conversation. Building on this more experiential approach, everyone regrouped after lunch for a workshop, led by Jaqueline Del Castillo, Senior Programme Manager at Nesta, to brainstorm what makes a social movement and how such a concept is best enacted.

With such a rich mix of content and activities, the day clearly achieved its many objectives for both individual neighbours and those hospices which have set up programmes. It also posed the wider question of hospices’ potential as catalysts for initiating/sustaining a public health and community development approach and whether this could enable them to be proactive in upstreaming and upscaling the delivery of care, and have an impact on whole populations rather than shorter, time-limited interventions with individuals. In essence, we were asked to consider the question: to what extent can hospices be a genuine community asset rather than merely part of the health and social care community?

The Compassionate Neighbours programme is now online. You can also find it on Twitter @compneighbours

St Joseph’s is looking to expand the network of Compassionate Neighbours with hospices and other organisations who are interested in their model. In return for the cost of time to share the model and resources, participants will have access to: a growing community of neighbours and professionals who are already rolling out the model; a Compassionate Coach to support you through the process; comprehensive  marketing and branding;  ongoing support and tailored bespoke training.  For more information, contact Carly Attridge