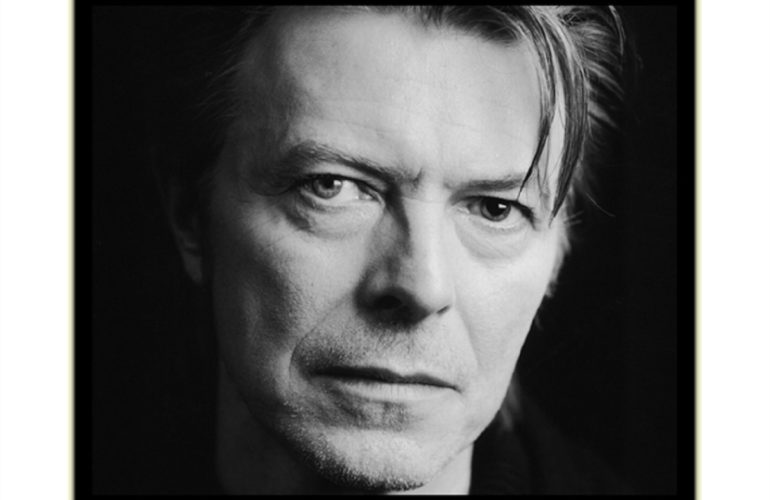 Dylan Jones is the editor of GQ magazine and has a number of other very public roles, including being a trustee for Hay Literary Festival.

He had contacted me in 2016 after my David Bowie letter was read out by Benedict Cumberbatch at a Hay Literary Festival Letters Live performance, and he’d asked me whether he could use my letter in his forthcoming book about Bowie.

I said yes, and thought nothing further of it; much had happened with this letter which summarises some of the essentials of good palliative care.

I felt this would be a good opportunity to outline what palliative care is to a different audience. I next saw Dylan at a subsequent Hay Festival event (The 2017 GQ Hay Festival Dinner) and he told me the book was ready to go.

I’ve contributed to a few medical books in the past, so when I heard that I’d be in the bio of a rock icon, my initial thought had been: “I’ve nothing much to offer!” There, compulsory Bowie song quote out of the way, I won’t do any more, promise.

I have several Bowie books, one is Tobias Ruether’s ‘Helden – David Bowie und Berlin‘, the other is the Victoria & Albert Museum’s hardback ‘David Bowie Is’, published to accompany the blockbuster international exhibition tour.

The latter is the only book to showcase Bowie’s personal immense archive of performance costume, ephemera and original design artwork, and brings it all together to present a completely new perspective on his creative work and collaborations.

Dylan Jones’ book is more of a compilation: eyewitness accounts and interviews. During the book launch at the Angel Hotel in Cardiff, Dylan was quick to point out that this is not a hagiography; far from it, he had also included statements and interviews that were less complimentary.

The book includes people who knew Bowie, people whose lives were touched by him. This is an oral biography of statements and interviews, and feels like you are entering a conversation as a fly on the wall.

In this way, it is quite different to many other biographies I have read. It captures the complexity of the Starman, whilst also providing insight into relationships and the context of the times.

As such, the narrative is varied and succinct and provides a wealth of anecdote about what drove and inspired him.

Tracing Bowie’s life from the English suburbs  to London, New York, Los Angeles, Berlin and beyond, its collective voices describe a man profoundly shaped by his relationship with his schizophrenic half-brother Terry; an intuitive artist who could absorb influences through intense relationships and yet drop people cold when they were no longer of use; and a social creature equally comfortable partying with John Lennon and dining with Frank Sinatra.

The first few pages hold the acknowledgment section, with Dylan Jones listing the places across the world that held people he had spoken to (my home city was there, and I’m pleased to say that I ‘put Cardiff in the book’).

Bowie played in Cardiff on three occasions, including Cardiff University’s Great Hall in the 70’s. The subsequent sections are chronologically ordered, for instance the first chapter lists interviews covering the period between 1947 and 1969. Much of it is already known, but encountering it all collated together in this way brings a new dimension to it.

I have been a Bowie fan for a long time, and am particularly interested in his Berlin years, so I found myself flicking to the pages that covered Romy Haag (his muse whilst he lived in Berlin) and the ‘Luetzower Lampe’ (a club in Berlin).

The talk at Cardiff Book Fest covered the different parts of his career, including Berlin, and Dylan shared his insights and the accounts he had obtained in countless interviews and conversations. He spoke to Bowie several times and it was particularly interesting to hear how Bowie was; charming, extremely funny, humble, at times mischievous.

According to Dylan, Bowie could make you feel incredibly special, but then again you might not hear from him again after a project had finished.

This aspect had been criticized by some, whilst someone else had in fact summarised it thus: “Bowie was like a great football team manager: picking the world’s best for the task at hand, with little scruples in letting people go when they were no longer required or when the task was over.”

More generally, the great affection that shines throughout the book from nearly everyone that was interviewed suggests Bowie was quite a different kind of star.

Mike Williams, editor of NME who interviewed Dylan during this Cardiff Book Fest evening, also asked questions surrounding Bowie’s last weeks of life, and whether many people had been aware of his illness, but it seems that even those close to him were quite shocked by Bowie’s sudden deterioration and death.

Dylan talked about his significant grief after he learned that Bowie had died, and it was clear that many of the audience members at the Angel hotel had felt similarly; Bowie was always there, and as one lady in the audience remarked, it is still unfathomable that he has left. I agree. I find that when we talk about celebrity deaths, we open up interesting angles on our feelings towards the topic of dying as a whole.

My conclusion from this event and from reading the interviews in the book concerning his last weeks of life and the reactions after he died, are that the really big themes in life remain similar for all of us; whether you are a big star like Bowie, or an ordinary person.

After the event, Dylan Jones and I shared a drink together and we chatted a bit more about Bowie’s death, what it meant to us and reflected on the impact it had had on us.

Death and dying are something we will all encounter, and literature and music can help us realise one important thing: that we are not alone in experiencing life’s grief, the joy and the pain.

This article was originally published in the international edition of ehospice on November 6.