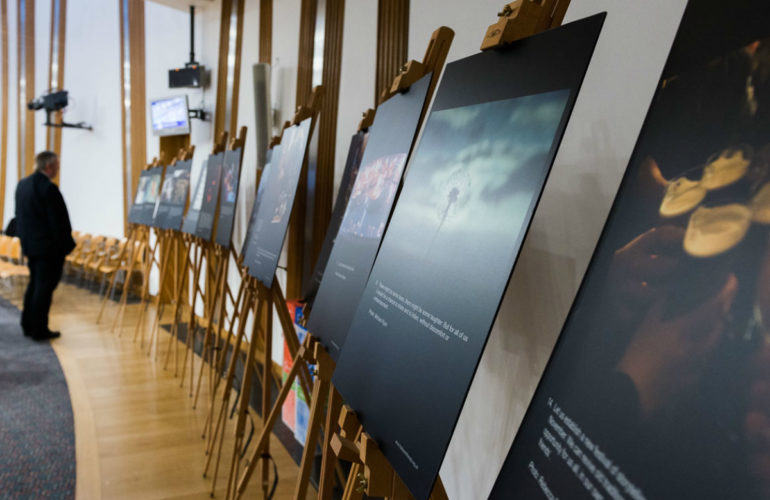 May 6, 2016 | No Comments
Categories: Community Engagement.

The exhibition is the result of a partnership between award-winning Glasgow-based artist photographer Colin Gray and the Scottish Partnership for Palliative Care (SPPC).

The exhibition features a series of photo portraits and wisdom from people from all walks of life who have cared for someone who is dying or has been bereaved.

As well as featuring doctors, nurses and individuals who have cared for a friend or family member with a terminal illness, the exhibition also includes some more surprising roles including a taxi driver, a teacher and a funeral director.

The exhibition aims to show that care and support comes in many guises and is needed by many different people; that it takes a village to support some at the end of life.

“Whether it is looking after an ageing parent, working as a nurse or cooking a meal for a bereaved neighbour, every day people help each other through the difficult times that can come with death, dying, loss and care. We wanted to show that ordinary people do amazing things when it comes to looking after the people around them.”

The series of portraits were all taken by Colin Gray, whose previous work includes ‘The Parents’, a series of photographs about his relationship with his parents and theirs with each other over a period of two decades and an exhibition and book ‘In Sickness and in Health’ which documented his parents’ deterioration in health and ultimately his mothers’ death.

Colin said: “The new exhibition explores similar themes to those in my earlier work – love, loss, mortality. This time however the pictures are of many different people, none of whom I had met before. The pictures are accompanied by each person’s own words about what they have experienced and the insights that those experiences bring.”

‘It Takes a Village’ is being hosted by 22 venues across the country – including a number of hospices as well as hospitals and libraries. A full listing is available on the Good Life, Good Death, Good Grief website,

The exhibition is being launched as part of Death Awareness Week Scotland (9-15 May 2016) which aims to raise awareness of the positive benefits of planning ahead for death and dying. The week has been organised by Scottish alliance Good Life, Good Death, Good Grief as part of its ongoing work to promote more openness about death, dying and bereavement in Scotland. Find out more on the Good Life, Good Death, Good Grief website.