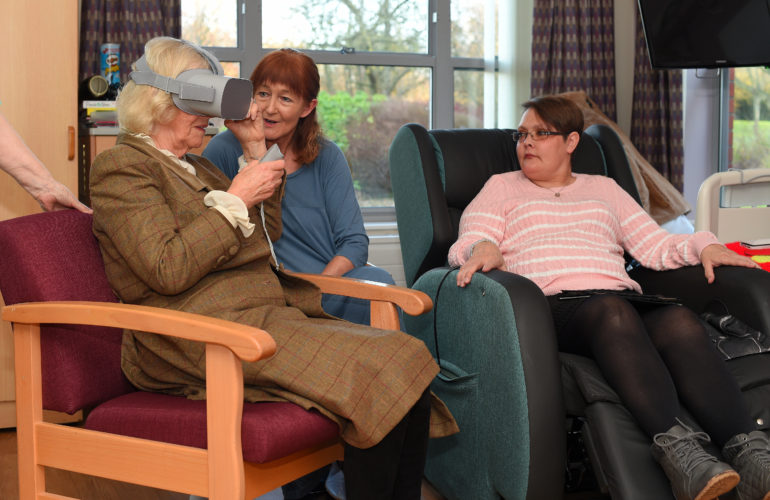 Photo caption: The Duchess of Cornwall tries out a virtual reality headset at Prospect Hospice

HRH The Duchess of Cornwall, who is President of Prospect Hospice, paid a special visit this week to kick-start its 40th anniversary celebrations.

During her tour she met with staff, patients and volunteers and even tried out the hospice’s virtual reality headsets.

She spoke to members of the hospice’s bereavement group, many of whom have recently experienced loss and spent their first Christmas without their loved ones, and commented on how important groups like this were.

“Everybody has experienced the same grief probably so you know exactly how everyone else feels,” she said.

“I think it is such a good idea to have group therapy to let it all out.”

The Duchess, who has been president of the hospice since 2013, also met Sonia Cox, a patient who is receiving care on its inpatient unit, and tried out a virtual reality headset, an experience she described as “quite extraordinary”.

The app used with the headset has been co-created by consultant Sheila Popert and helps to reduce pain and stress for patients.

The Duchess tried the Forest of Serenity app, which is narrated by Sir David Attenborough. It shows a peaceful walk through trees, with birds chirping overheard and wildlife roaming below.

“I can see you could get addicted to this” she said after using it. “It relaxes you, doesn’t it.”

The hospice, which is based near Swindon in Wiltshire, currently has six of these headsets for patients to use.

Before the Duchess left she cut a cake she had brought to mark the hospice‘s 40th anniversary. She also unveiled a beautiful embroidery, which had taken the local Marlborough Embroiders Guild nearly four and a half years to complete.

The embroidery will soon go on display at the hospice’s base in Savernake Hospital in Marlborough.

Commenting on her visit, the Duchess said: “I know everybody thinks you’re going to come into a hospice and its going to be a sad, depressing place but it is always the opposite”.

“It is uplifting and Prospect is certainly one of the most uplifting hospices I’ve been to and I’m very proud to be its patron.”

She was presented with a Prospect rose bush by Kasie-Louise Stacey, 15, and her brother Aiden Stacey, nine.

They raised money for the charity by hand-making Christmas cards in memory of their grandmother Denella Maslen, 54, who died at the hospice in June.

The charity supports around 7,300 patients, carers and family members each year.