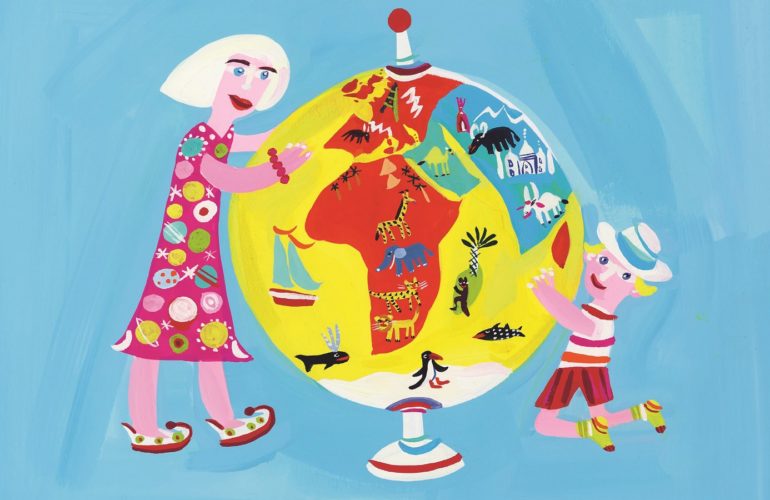 Juliet Rix has written an uplifting book to introduce children to the concept of dementia. Here she tells ehospice why she chose travel as its theme and whether there is enough awareness of the condition.

What inspired you to write Travels With My Granny?

The idea came from an elderly man I met in the course of doing an article for the Guardian, who was caring for his wife who had dementia.  He had carers coming in the mornings and evenings to help with the physical stuff, to help get her up and then get into bed.  In the evenings when they had to undress her and get her ready for bed sometimes she got very distressed, and they were always in a hurry and did not really understand. You would get distressed if someone was trying to undress you when you were standing on a bridge, and that image just stuck with me, of somebody who is somewhere else completely in their head and yet something’s happening to them in the here and now, and the two do not match up at all.

I am exceptionally lucky that I do not have dementia in my immediate family, but I have so many friends now who do.  We are approaching 850,000 plus people just in the UK living with dementia. It is inevitable that children are coming across it. It might not be their own grandmother or great grandmother, it might be a neighbour, but for kids to have an adult behaving “weirdly”, whatever age the adult is, I think can be quite disturbing. As a parent or a carer you really want a way to let them understand it without it being frightening and without being disrespectful to the older person. That was why I thought about the traveling idea because if you have read the book with your child and you see somebody behaving strangely, you can say “I think they might be traveling, I wonder where they are today.” If somebody is distressed, you might be able to say “oh, this looks as though something not very nice is happening where they think they are. Hopefully they will be back here soon.”

What sort of research did you do?

I had done a number of articles as a result of which I got to know a bit about dementia. I interviewed a woman who had early onset dementia, and again a couple of years later which was very interesting, I did an article about the virtual dementia tour, a multisensory way of giving people a sense of what it might feel like to have dementia. I talked to carers in care homes and I did a 13-part health programme for the Age UK radio station, where each programme featured one condition that affects older people. For dementia we had Professor Clive Ballard who is brilliant, at the time he was Professor of Age-Related Diseases at Kings College London, he’s now the Executive Dean of the Medical School at Exeter University.

The illustrations are integral to the book, was it your vision from the start that the book would be very visual?

It was absolutely my intention, because it is not just about dementia, it is also about traveling around the world, the book takes you to all sorts of different countries, cities and environments, from the mountains to under the water. I wanted them to be really cheerful and bright.

Do you think there is enough awareness of how to care for people with dementia?

I think people who have not dealt with it themselves do not know how to deal with a situation where somebody is behaving in a way that is completely detached from what is going on.  That can be very difficult, and there are increasing views from some experts that it is better not to constantly contradict, which does not mean that you want to be lying or leading away, but that constantly saying to somebody “no that is wrong”, “no that person is not here”, may actually not be helpful, and so I was also aware of the move towards that way of dealing with things, that as long as it is not an immediate problem allowing somebody the space to be where they are is fine.

Do people find it easy to talk about dementia?

People do find it difficult, and it is difficult especially if it is within the family because people’s personalities change. You do not want to disempower somebody but at the same time people are frightened of it, which is completely understandable. The Alzheimer’s Society are doing a lot of work in schools now and are  trying to create a more dementia-friendly generation coming up. I think that is a really good idea because if you grow up being aware of it, not frightened but accepting, that has got to be helpful for everybody. I hope that the book in a very small way will contribute to that.

There have been some groundbreaking initiatives in the last few years such as Playlist for Life, which helps people stay connected to their loved ones through music, and BAT, table tennis therapy that stimulates motor skills.

It is really good that there is more of that sort of thing. I think the problem is that the practical day-to-day stuff needs more attention. The Dutch are somewhat ahead of us on this in terms of creating dementia-friendly environments and the way that their care homes function. Caring for people with dementia is difficult, and we do not at the moment give sufficient respect or pay to the people working in these places. We need to look at how people are cared for, and how people are trained to look after people with dementia, to have sufficient respect for the individual while still being aware that they may not be in the here and now.

Travels With My Granny is out now on Otter-Barry Books

This month is World Alzheimer’s Month