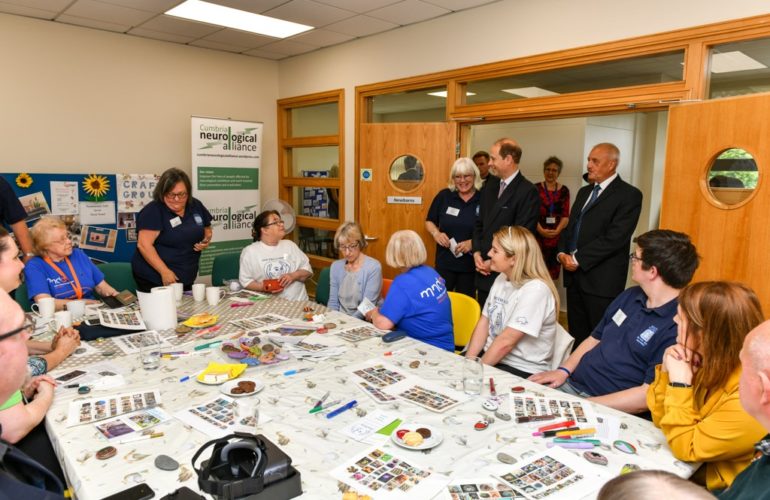 Earlier this year the ONS revealed that Barrow-in-Furness, a town in Cumbria with 65,000 inhabitants, had one of the highest Covid-19 mortality rates in the UK. This stark statistic highlighted the health inequalities that affect the town’s population.

St Mary’s Hospice, located 11 miles away in the market town of Ulverston, is addressing the area’s need for improved access to end of life care by forming strong local partnerships to deliver a wide range of new services to Barrow. The work has already seen them win three awards in its first year; here CEO Val Stangoe writes for ehospice about this pioneering effort.

St Mary’s Hospice serves part of South Lakeland and all of the Furness Peninsula in Cumbria, with the area’s largest local conurbation in Barrow.

At the Trustee Away Day in 2016, Trustees agreed as a priority to find a way to deliver more care into Barrow for the following reasons:

It was the work of the Trustee Board from this point till the end of 2019 that led to winning the Charity Governance Award 2020 for Increasing Impact. This included early work to find and refurbish a suitable building to deliver services. Much sooner than expected we found a site big enough to accommodate both our growing Furniture Warehouse and separate care services.

The Trustees quickly recognised that the hospice couldn’t afford to fund new services alone, and so initiated an innovative partnership approach that was energetically embraced by local groups. This meant the hospice underwriting some core costs to enable smaller organisations to work alongside us, delivering care jointly to a broad group of individuals and conditions. The Trustees underpinned this new model by putting in place a multi-organisation Steering Group to lead the work.

By the time the building opened in November 2018 we had already engaged partners who either worked with client groups already using hospice services or whose clients were likely to benefit from a rehabilitative palliative approach, and with partners such as Adult Education who had resources to offer. Partners initially included groups supporting people with lung disorders, neurological conditions, stroke, dementia and family carers for people with these conditions. Hospice services were also delivered on site including Bereavement, Complementary Therapy and Living Well Services.

While initially partners’ services ran independently side by side, a second phase saw us start to narrow the gaps between us. Firstly several partners combined to deliver a regular multi-agency Dementia Hub. Next a hospice volunteer kindly started a singing group open to anyone who wanted to attend. A trial was made of Adult Education classes but attendees found the paperwork onerous so these ceased.

There were further extensions to this way of working when members of a bereavement craft group continued to meet informally after the end of their supported course, and when hospice volunteer support enabled the Stroke Association group to begin meeting fortnightly rather than monthly. We were reaping the benefits of collective strength, and after 12 months had a monthly footfall of more than 300 people.

Formal feedback identified that those using the new building felt the fresh, clean site was a real community asset, and by offering a higher level of accessibility than other local organisations it enabled more people to be involved. Users told us the increased social opportunities added to the pleasure in their lives and gave them emotional and practical support in living with their illnesses. This comment exemplified exactly the outcome partners had wanted from this project: “When I was in very low moods at home all day every day I was starting to have fallouts with my husband and didn’t feel like cooking or eating, [I] just sat watching TV or generally lounging around. But coming here has given me a purpose and in the future I hope to be doing more, i.e. volunteering in groups or something.”

Christmas 2019 was celebrated with a party attended by 50 of those attending various services in the building, with the requisite party hats, too much food, school children and carols. It was a warm end to a fantastic first year. Charging ahead into year two the hospice Living Well Team showed the importance of the building to hospice strategy by moving their offices into the premises, taking full ownership of it.  Each member of the team was made a point of liaison for at least one partner organisation to strengthen relationships and cross referral.

Sadly at that point Coronavirus intervened.  A week before national lockdown commenced all face to face services from the building were closed down due to the vulnerability of the service users. For the next month partners continued to support us in delivering donated food, prescription medicine and emotional support via telephone into the wider community of those self-isolating. At the end of this period responsibility for this work was handed to the local borough council to allow our staff to return to support clinical services. For the time being the building was closed up.

We are proud of the way this partnership has pulled together a variety of groups and brought support to more than 300 people a month in just over a year. Recognition of this innovative partnership working came in 2019 with a Charity of the Year Award from the E3 Business Awards, and the Hospice UK Innovation in Partnership Working Award. We were delighted to make it a hat trick in early 2020 by winning the Charity Governance Award.

A growing atmosphere of welcome and support was likely to develop with the team moving in to the new building and taking complete ownership of the project. It’s left us all wanting more – what will the new world post-Covid hold in store for the Living Well Centre? Only time will tell.  But we’re betting there will be partnership in it.