Explorers trek the Himalayas to raise money for hospice 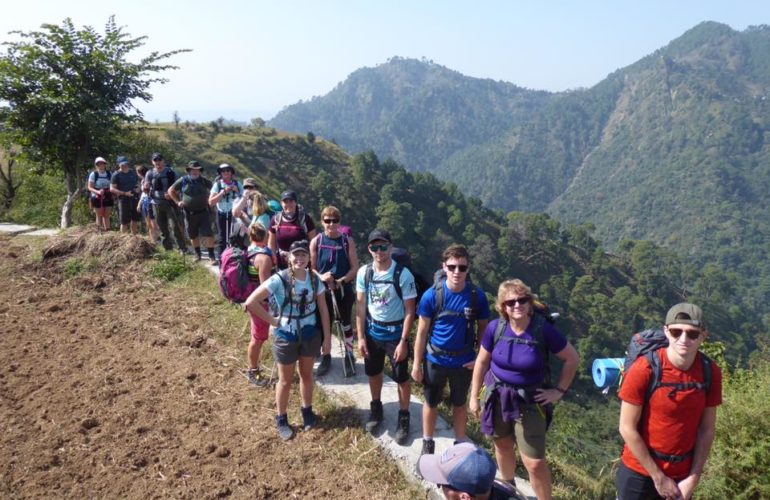 A team of 42 explorers are trekking 67km across the Himalayas to raise funds for St Barnabas House in West Sussex.

The expedition will last a total of ten days until October 28, during which the trekkers will journey through the spiritual heart of Northern India, home to the Dalai Lama and centre of the Tibetan community in the foothills of the Himalayas.

In their first three days the team have already crossed paths damaged by mudslides, struggled up steep gravelly inclines, witnessed an Indian funeral and passed shepherds herding their goats, and moved a bull that was blocking their way.

The team are planning to pass through the Kingdom of Gaddi, a semi-nomadic race who spend months wandering the high passes with their cattle, rhododendron forests, Hindu settlements and Buddhist monasteries.

The highest point they will reach is Laka Got, which lies at 3,500 metres above sea level and is situated at the tip of a glacier. While they are here, trekkers will have the opportunity to hang prayer flags to celebrate the lives of loved ones, many of whom were cared for by St Barnabas House nursing teams, either at the hospice or at home.

Glen Gillam, 46, chose to take on the challenge in memory of his mother and father, both of whom were cared for by the hospice. He said:

“My mother, Susan Pamela Gillam, passed away in the old St Barnabas on 22 December 1993. She had a lung removed about seven years prior and as I was in my teens I only remember her being tired, leaning on me a lot, and going into hospital but always still smiling and being my mum.

“My family, including my mum, very much protected me from her illness and tried to live life as normally as possible. I didn’t understand how ill she was until she passed away. I was 21 years old, so it was a shock.

“She was in and out of the hospice in the months prior to her passing. I remember visiting her there and how warm and kind the staff were to us all. When she passed away my brother, father and I were able to be with her at the hospice.”

Glen then came into contact with St Barnabas House again 22 years later, this time at the new hospice in Goring-by-Sea, which was built in 2011. He continued:

“My father, Malcolm John Gillam, known to all as John, was admitted to the hospice on 23 December 2015 and passed away on 24 December. He had stomach cancer which spread to his lung and liver. His deterioration in the last week was fast.

“On 23 December I was speaking to the hospice and I really did not know what to do. My father just wanted to be there. The team and the nurse helping us were amazing and said if I could get him there in 45 minutes he would have a place.

“Dad and I jumped in the car and got him there and I could see that Dad’s relief was huge. It was very obvious that he wanted to be in the hospice as I am sure he knew they would look after him having seen how they cared for my mother. I do not think the timing was a coincidence either, being so close to my mother’s death.

“When my dad passed away it hit me hard and I realised I had not really dealt with my mum passing, so I took up the offer of counselling from the hospice which really did help me greatly.”

On his reasons for taking part in the trek, Glen said:

“I am doing the walk primarily as I feel that the hospice did an amazing job in looking after my parents and my family at the worst time and I want others to get the same care I was so very lucky to receive.

“Secondly, I am trekking with one of my best friends, Darren Dalton, who lost his stepdad and mother-in-law recently who were cared for by the hospice, and we both are very excited about seeing India and taking on the challenge.”