Family visits flower tribute to son from Duchess of Cambridge 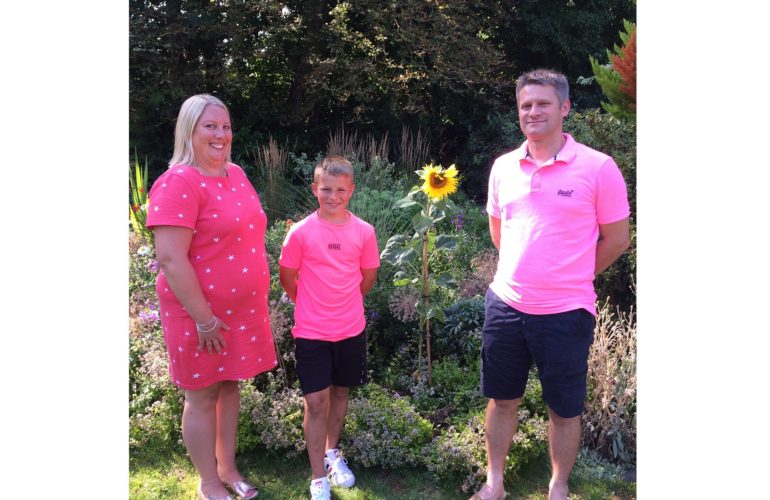 A family has returned to EACH, the hospice in Cambridgeshire where their son died, to see the sunflower planted in his memory by The Duchess of Cambridge.

Nine-year-old Fraser Delf died in January of Coats plus syndrome. A month later during Children’s Hospice Week, in a video call with his mum Carla, dad Stuart and 13-year-old brother Stuie, the Duchess promised to arrange a tribute in his memory.

A few days later she joined families supported by EACH, a volunteer gardener and staff at The Nook, the charity’s new Norfolk hospice to plant a sensory garden.

EACH, in keeping with the family’s wishes, moved the sunflower to its hospice in Milton, Cambridgeshire, where Fraser spent the final weeks of his life, and planted it in the grounds.

The family recently visited and saw the sunflower, now in full bloom, for the first time. They colour-coordinated as Fraser loved pink, with the pattern on Carla’s dress representing him – their shining star.

Carla said: “The sunflower looks so bright and beautiful, just like Fraser. The centre looks like a heart shape, just perfect. I recently saw a poem that said sunflowers choose to live their brightest lives as they know they won’t be around for long and that really fits with Fraser.”

The Delfs were first introduced to EACH in October 2018, with the charity helping to manage the pain Fraser would experience as a result of his condition. By November 2019 Fraser was deteriorating rapidly and the family moved to EACH’s hospice in Milton, believing they only had days left to spend together. Fraser managed to defeat the odds, lasting seven weeks before he died on 17 January, 2020.

With support from EACH staff, the family made many lasting memories in their time at the hospice. To show their appreciation, Stuie ran 5k every day throughout May, with his endeavours raising over £16,300 for EACH during the lockdown.