Films about grief are the focus of awards shortlist 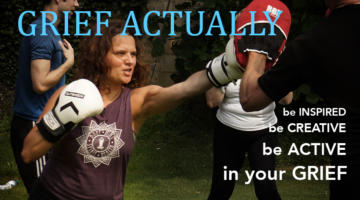 A short film that shows bereaved parents attending a weekend retreat to deal with their grief has been nominated in The Charity Film Awards.

Grief Actually shows participants taking part in a programme of creative and physical activities including writing, photography, running and boxing, with the aim of approaching their feelings of loss by doing and making things.

The retreats have been developed by The Good Grief Project, a charity formed by Jane Harris and Jimmy Edmonds, who also produced the film.

In 2017 they released the documentary A Love That Never Dies, where they embarked on a road trip to talk to bereaved parents inspired by the death of their own son. The film is now available worldwide on Amazon and Vimeo.

The Charity Film Awards recognise the best films produced by charities in the UK. Categories are based on the charity’s turnover for the latest financial year, so nominations are open to all regardless of the size of the organisation and the budgets available.

Other contenders for awards this year deal with the grief experienced by children and teenagers, how to explain a cancer diagnosis to a child, and living with dementia.

Grief As a Teenager has been put together by six young people attending Tynedale Hospice at Home’s Film Club in Northumberland, who have all been bereaved of a parent and wanted to make a film about their experiences to bring comfort to other young people in a similar situation.

Our Story revolves around a similar theme. Created by a group of young people who access the Children’s Bereavement Service at The Shakespeare Hospice in Stratford-upon-Avon, it highlights the stories of young people talking about the difficulties they faced when their loved ones died.

Other shortlisted films to focus on bereavement and grief have been produced by Child Bereavement UK and WAY Widowed & Young.

Lymphoma Action have produced a film specifically for children called “If someone close to you has low-grade non-Hodgkin Lymphoma”, covering general experiences associated with cancer such as chemotherapy and hospital appointments as well as the more specific aspects of the condition.

The Alzheimer’s Society have produced Somebody I Used To Know, about the day-to-day life of Wendy Mitchell, who was diagnosed with dementia in 2014 at the age of 58. The film shows how she’s taken control of her life with the support of the charity.

The shortlisted films were voted for by over 40,000 members of the public. The next vote will be by a panel of expert judges, with the winners to be announced at a red carpet ceremony in London later this year.