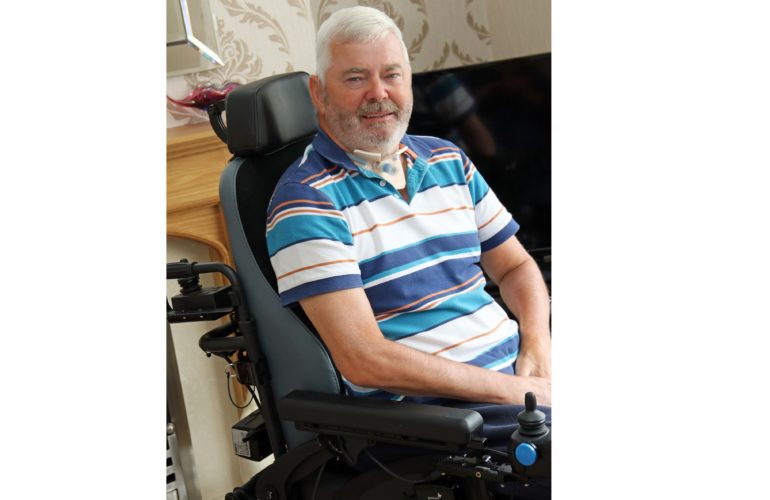 A former mechanic who has faced severe health challenges since being struck down by a rare neurological condition is to take to the hills for St Teresa’s Hospice in Darlington.

Keen fell walker Kenneth Longstaff is to tackle Latrigg, a 368 metre high fell in the Lake District with a specially adapted wheelchair and the help of a Teesside running club.

The 60-year-old has already raised close to £1,200 in sponsorship for the challenge taking place this Saturday 8 June, which will be divided between St Teresa’s and the KeyRing Living Support Network.

In 2012 Kenneth was struck down by Guillain-Barré Syndrome (GBS), a rare neurological disorder in which the immune system mistakenly attacks the nervous system causing the body to shut down.

He spent three and a half years in hospital, including a year in an intensive care unit, and still needs 24 hour care at his home, after becoming one of the most serious cases ever seen by his consultant.

“I have such limited mobility now so one of the few things I can do is art, and I paint Lakeland landscapes from my memory at KeyRing every Wednesday” he says.

“I was a passionate fell walker and love the Lakes, so when one of my carers’ husbands, David Barugh, who is in Orchard Eagles Running Club, suggested the sponsored walk I immediately said yes.” He is set to scale the hill thanks to the wheelchair David has specially designed and adapted for him.

“After GBS took hold I attended the day centre at St Teresa’s for more than a year. My wife Beverley and I both had counselling there and I also went for physio, acupuncture, reflexology and massage. I met some remarkable people who were so positive despite what they were going through. KeyRing and St Teresa’s are such great organisations and this is a chance to give something back.”

The Orchard Eagles running club will accompany Kenneth on his fundraising ascent, along with a BBC documentary film crew led by director Xavier Alford (who has himself been diagnosed with a progressive form of the condition) who are filming Kenneth and his family for a documentary on GBS.

“It is rare but for those who get it GBS wrecks lives and there is only limited research into the condition,” Kenneth says.

“I was fine until one day I suddenly couldn’t see. I went to A&E where I started to lose the function of my limbs. About 24 hours later I was in respiratory arrest, on a ventilator and only able to hear. As well as raising money with the walk, it’s great to be part of a documentary which will raise awareness of the condition.”

“This condition really does put patients and their families through the mill and we were delighted to be there to do what we could to help Bev and Ken” says Jane Bradshaw, chief executive of St Teresa’s Hospice.

“It is amazing that they are now tackling this Lakes expedition. What a brilliant effort, and by doing so helping to keep our services running for the people of Darlington, South Durham and North Yorkshire.”