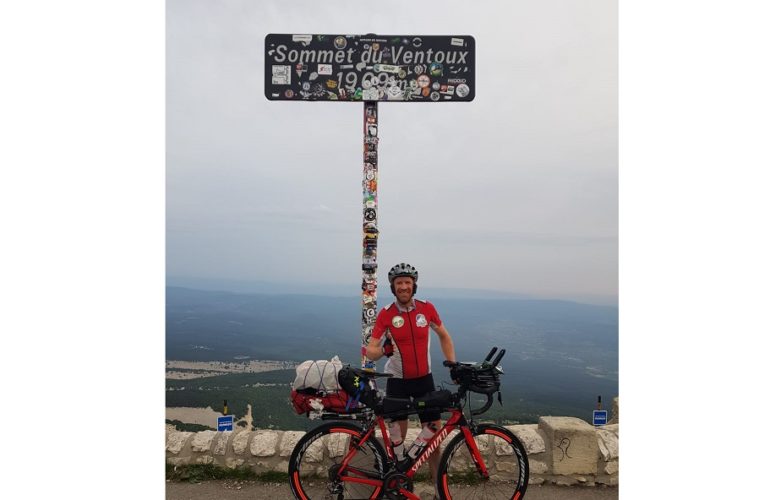 A fundraising cyclist has raised more than £2,500 to help save Acorns Children’s Hospice in the West Midlands from closure as part of a phenomenal challenge.

Kevin Harvey pedalled his way across Europe for the Save Acorns Black Country Hospice Appeal, covering 3,000 miles and cycling through France, Germany, Austria, Slovenia and Spain and Gibraltar in the Race Across Europe, known as Europe’s toughest cycling challenge.

“It was pretty emotional. It wasn’t until the last 10 to 15 miles that I started to realise what I’d actually achieved. At the time the hospice was still earmarked for closure so there were the emotions of that and how it was affecting staff and families. But it was a real adventure; some days were great and the scenery was incredible, and other days were tough.”

Kevin began the challenge in Boulogne sur Mer on the north coast of France at the end of June, cycling 2,933 miles to Southern Spain. He and other participants crossed the Alps twice, the Pyrenees once and climbed the Alps’ third highest paved road en route to Gibraltar.

He cycled an average of 180 miles a day, completing the challenge in just over 15 days.

It wasn’t until Kevin arrived back in the UK that he learned the news that the decision to close Acorns hospice in Walsall had been put on hold and the Save Acorns Black Country Hospice Appeal had been launched. He added:

“There is such a drive in this hospice. Every day people are talking about how to help and raise money. It’s a fantastic example of the quality of the team we have here.

“Acorns needs to be one of the first charities on everyone’s mind and people can do anything to support our appeal. Small or large it all adds up and will make a real difference.”

Acorns launched its Save Our Black Country Hospice earlier this month after putting its decision to close the hospice on hold for four months. The charity needs to raise £2million to safeguard it until new government funding reaches its height in 2024.