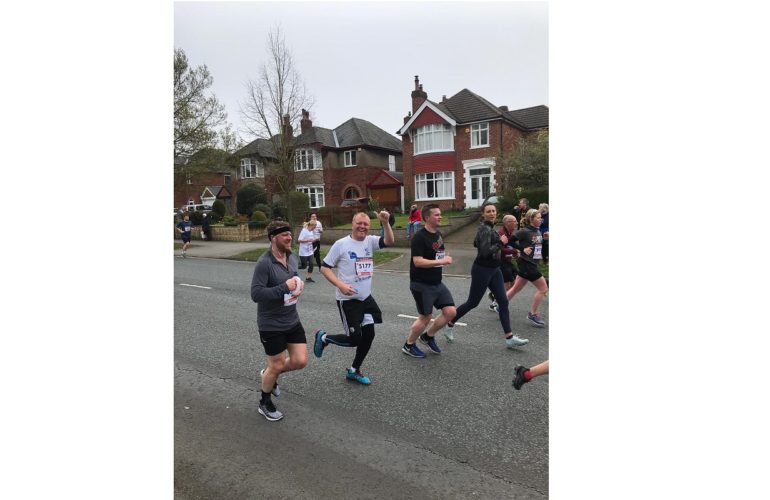 A man whose father was cared for at St Barnabas Hospice in Lincolnshire has helped his company raise over £7,000 for the charity.

Jamie Aspland is branch manager at estate agent’s Pygott & Crone, and has been helping the company to raise funds in memory of his father, who died in 2016 aged 63 after being diagnosed around six months earlier with terminal cancer. Nigel spent many weeks being cared for by the Hospice at Home team before choosing to spend his last 29 days at St Barnabas Hospice within Grantham and District General Hospital.

“Before we were referred to St Barnabas, we had a family rota to make sure someone was looking after Dad at all times” Jamie said. “This didn’t go to plan when dad tried to go to the toilet on his own one night as he didn’t want to wake me after a busy day at work. Unfortunately he fell and it was a wake-up call that we just couldn’t cope on our own without extra support.

“From then on, St Barnabas took over dad’s care and it felt like a weight had lifted. I had promised myself I would look after dad until the end but the St Barnabas nurses were able to show me that it would be better for dad if we all worked together. They were 100 per cent right.

“I can hand-on-heart say that without St Barnabas I’m not sure how I would have got through the last months of dad’s life. The room which dad was in was amazing, the support and care given to him was second to none and nothing was ever too much. The nurses supported me when I needed supporting and left me when I needed time alone. They just seemed to know what to do at all the right times. When end-of-life came, they knew all the right things to do to keep us calm and help us think about the next steps.

“One memory that sticks in my mind is about another family who were going through the same thing as us. The lady who was terminally ill wanted to be alive for Christmas but her family and St Barnabas nurses were aware that this would not be possible. The nurses arranged for her to have her own Christmas Day on November 25. They came in wearing Christmas jumpers, brought presents and enjoyed all the fun and laughter of a normal Christmas with the family. What an amazing memory to leave that family with.”

Jamie has pledged to raise enough money for St Barnabas to cover every penny’s worth of care and support that was given to himself and his family. “If I could have one more day with dad, I’d want thank him for the legacy he has set up for our family and let him see his grandson, Jai, playing football. I’d want to hold him once more and tell him just how much I love him. There are always times when I miss his presence more as it’s hard knowing I can’t run decisions past him anymore and get his advice.”