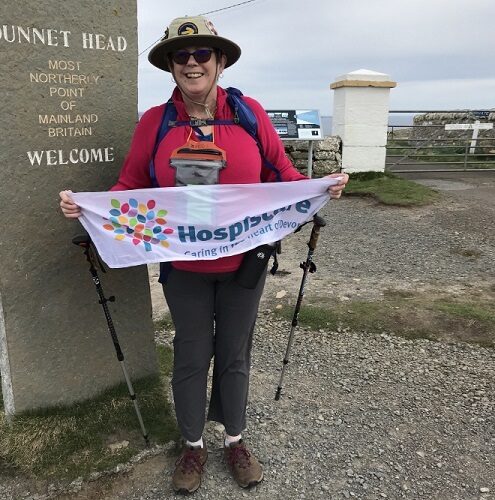 An intrepid fundraiser is set to complete a 1,000 mile walk in aid of her local hospice this Sunday, the day of her 63rd birthday.

Pip Bowhay from Kenton in Devon, began the walk in aid of Hospicecare in Devon on May 1, starting from Dunnet Head, north of John O’Groats in Scotland. She will finish the challenge at Land’s End in Cornwall, aiming to stroll into local pub The First and Last Inn at 2pm.

Pip is a passionate fundraiser for local charities. In 2015 she walked the 479 miles of the Santiago de Compostela route, the following year she shaved her hair off, and she has organised abseils down a church tower, frock swaps and compiled a cookbook, raising over £10,000 in total.

These achievements are even more remarkable considering Pip lost half her sight because of a stroke in 2007, and her husband Richard passed away at the hospice in 2011, when her two daughters were still in their early teens.

At the end of last year Pip put out a plea through churches local to her route and through local tourism organisations, asking for one night’s free accommodation wherever possible and was fortunate in receiving many kind offers. In those areas where none were forthcoming Pip has checked into campsites or B&Bs at her own expense, meaning that every penny raised directly helps Hospiscare. At the time of writing, Pip has already raised over £3,100 in sponsorship and donations.