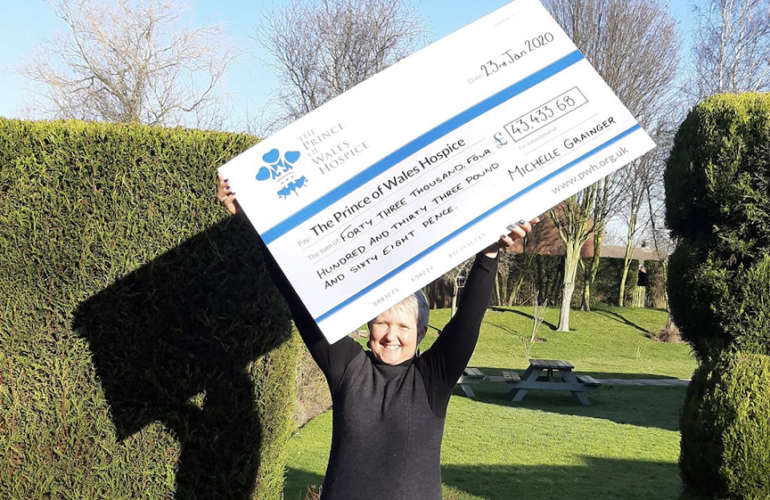 A fundraiser for The Prince of Wales Hospice in Pontefract embarked on 50 challenges in the year of her 50th birthday to raise money for the charity, and has been appointed as a patron in recognition of her efforts.

Michelle Grainger embarked on her year of fundraising last February following her 50thbirthday. Her aim was to complete 50 challenges throughout the year to raise £30,000 for the hospice. However she surpassed this by raising total of £43,433.

Some of the highlights from her campaign include taking on the world’s longest zip wire, shaving her head, a five-aside football tournament and hosting a battle of the bands.

“The best moments in the year have been seeing the kids in the community putting money in star jars” Michelle said. “They’ve raised £5,000 between them and they make me so proud.”

“I’m overwhelmed by how many people in the area have come together to help – anything else we raise is a bonus.”

The whole community got behind Michelle during her campaign, and she reached her £30,000 target in October after completing just 30 of her 50 challenges. Feeling inspired, she continued with her challenges to raise even more money.

She first began fundraising for the hospice back in 2011, when her father was taken ill and was admitted to their inpatient ward.

‘I first wanted to support the hospice because of our experience, and the help we received caring for my dad” Michelle said.

“We wanted to give something back. I wanted to help everyone else to see it how we see it; a place for everyone and their families, who need support with terminal illness. Somewhere that is dignified, peaceful and friendly.”

Michelle has six challenges left, with a community party set to be her final challenge. “We’re hosting the party to say a big thank you to everyone in the community who’s backed both me and the hospice in my 50 challenges” she said.

“The party will be held on Saturday February 8 and on the night I’ll reveal the grand total of money we’ve raised.”

“Working with the hospice has been amazing, I’ve got to know a lot of the people there and they’ve become an extended family. I’ll definitely carry on fundraising for them, my shop has become a community hub for people to drop off donations and come for a chat.”

Earlier this week the hospice invited Michelle to a celebration lunch to thank her for her efforts to raise funds. Staff, and members of the Board of Trustees also welcomed her as a patron of the hospice in recognition of her incredible fundraising.

For more information visit The Prince of Wales Hospice