CarePeople & Places Good Grief: a book to help with feelings of loss - ehospice

Good Grief: a book to help with feelings of loss 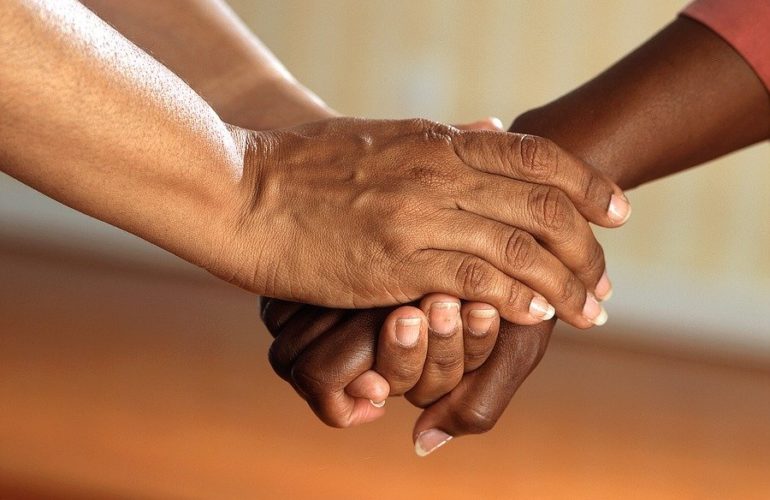 After the sudden death of her partner in 2017, author and lecturer Sam Shakes set up a writers’ group at St Joseph’s Hospice in London to help bereaved people process their grief through writing.  Sam and six other writers have published some of their work in the book ‘Good Grief’ with the aim of helping others deal with feelings of loss, shock, anger and sadness. Below is an excerpt from the book written by Shirley Aransibia, where she considers the emotional impact of the deaths of several loved ones throughout her life.

I used to be terrified of death. Even the word itself was difficult to say or even see written on a page. It was easy for me to cry as a child, just thinking that one day my parents would grow old and eventually die.

My first experience of seeing a dead person was my school friend when I was 16. It was such a shock to find out that people you know really do die. It doesn’t just happen on TV, in films or in the newspapers to other people.

Then nine years after this, dad passed away and the reality was a little too close to home. I was in a state of shock. How could dad leave mum, leave us all alone? Did he just give up or did he fight and the illness won? One of the last things he said was that he was ready to go. Then I waited fearfully for mum to go because I never thought she would survive without dad. But she did – she carried on for at least another 30 years.

When my children’s pet cat passed away suddenly after we had cared for him for 13 years, it felt like losing a member of the family. I include him here because I would never have thought losing an animal could leave such an empty space in your life. I used to think pet owners were mad to speak like this. I was one of those people that would say, “Get over it. It’s just an animal not a person!” I learnt very quickly that is just not so.

The same year I lost my 26-year-old nephew to a sudden and terrible condition. It was such a wake-up call – yes, young people also die, people you really love, people in your own family that will never have a chance to get married, have children, live their lives to their fullest potential. It was almost as bad knowing that he was an only child. My sister-in-law deprived of her only beloved son and the chance to have grandchildren. Being a mother, I felt her pain every time we met.

By the time mum passed about 18 months later, the huge blow I was expecting just didn’t happen. I wasn’t plunged into despair. I wasn’t inconsolable. If you had told me that when my mum would eventually pass I would be calm and collected, I would never have believed it. In fact, I would have been quite offended that anyone could think that of me.

The reason for my calmness was because just four years earlier when I last saw my mum, I knew it was for the last time. Circumstances prevented it being any other way. I went home after that visit and cried solidly for two days. I went into a kind of numb depression and grieved for a long time. But the point is, I grieved as if she had passed. So when it really happened, there were no tears left.

In early 2016 my eldest sister succumbed to an illness from beginning to end in less than a year. We hadn’t seen each other for several years due to various disagreements but on hearing she was gravely ill, I took the ‘bull by the horns’ and turned up at the hospice in south London where she was. I was terrified. I paced up and down the corridor for ages before going in. I thought she would ask me to leave, but the opposite happened. We reconciled not with direct words, but indirectly. It was as if the past had never happened.

I stroked her hand, painted her nails, reminisced over the good old days, shared the odd joke, played her favourite hymns and when the time came, calmly listened to her instructions regarding her funeral and personal arrangements with our other sister. It was extremely bittersweet that on the night she passed, the two of us had been at her bedside. We had been twittering on about God knows what for ages while she quietly slept, when she suddenly told us to leave in no uncertain terms as we were ‘getting on her nerves!’ Her comment was humorous and sad at the same time because it was the last thing she said to us, but it was typical of her personality, to say exactly what she felt regardless of anyone else’s feelings.

By the time we got home that night she had died, and we got straight back into the car to return to the hospice. Could that have been her way, just to be alone to drift away and spare us? The day she passed away was the day after my birthday. Did she hang on so that the days did not coincide?

l now feel I have sufficient experience of death that I could be of use to someone else; maybe help ease someone’s pain by lending a calm and understanding ear. I’m not terrified of death anymore. We will all lose someone we love, we will all experience the despair, the sadness, the ‘what ifs’ and after a while, we will be able to deal better with death and those debilitating extremes of emotion. We can and do grow through such traumatic experiences – they make us aware of our own mortality. This can make us appreciative of life and the love we have and give, and it can make us stronger.