A woman whose beloved Grandpa died at St Giles Hospice is calling on local people to support the “amazing” charity which cared for him through his final days.

Martha Davis, aged 24, who works as an NHS Communications Officer, has been a passionate supporter of St Giles since her grandfather Alan Bird received end of life care at the Whittington hospice.

Martha said: “St Giles is such an amazing local charity and they recognise that good end of life care is so important, not only for the patient, but for the whole family too. My Grandpa had been there for me all my life, and it means so much that I was able to be there with him in the last moments of his. It’s the moments together that matter the most.”

As well as fundraising for the hospice after her Grandpa was cared for by St Giles, Martha also joined the hospice’s weekly lottery, and was delighted to get a phone call a couple of months later telling her she’d won the £1,000 weekly jackpot prize.

Martha said: “Grandpa always wanted to give me a bit of pocket money – even after I’d started earning a wage – as he was worried about whether I had enough cash after I’d graduated.

“I like to think that he’s looking out for me even now and used the lottery as a way to make sure I’m alright even though he’s no longer here!

“I was lucky enough to win the weekly jackpot prize not long after signing up, which was completely unexpected! It’s helped me towards a house deposit and it’s so nice to think that a donation in memory of my Grandpa has enabled me to do something I know he would have wanted.”

Martha, from Sutton Coldfield, was very close to her Grandpa throughout her childhood and they shared many memorable family holidays together. Sadly, he was diagnosed with cancer and in 2018 was admitted to St Giles Hospice in Whittington for end of life care.

Martha was devastated by his illness but was comforted by the “truly personal care” she says he received at St Giles and the support her family was offered both in his final days and after he passed away. 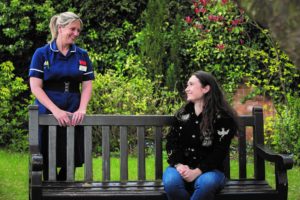 “I absolutely worshipped my Grandpa and the staff understood that and treated him just as our family would’ve wanted,” she said. “It’s hard to express just how much Grandpa’s amazing care meant to us as a family. You simply can’t put a price on the love, support and peace of mind that we all received.

“Every member of staff was a specialist in their field and we trusted them completely. It was so reassuring for us as a family. When we left the hospice we never had to worry – we always knew that Grandpa would be cared for just as attentively and lovingly as though we ourselves were still at his bedside.

“We could concentrate on being with Grandpa until the end, knowing that all his needs were taken care of and, when the time came, we were given all the time we needed to say goodbye to him and begin to grieve.

“It’s vital for everyone to support St Giles; you just never know when you might need their care. Nobody plans on becoming seriously ill, nobody plans on dying, but because of the support of the local community, St Giles can be there for patients and families when they’re at their most vulnerable.”

Chloe Herbert, Head of Fundraising at St Giles Hospice, said: “The support of local people means so much to the patients and families supported by St Giles, particularly when our income has been so badly affected by the COVID-19 pandemic over the last 18 months.

“There are so many different ways to support St Giles and we’d like to say a big thank you to our community for ensuring that we are able to provide care for patients and their families living with a terminal illness. We are hoping our community will be there for us again this summer, supporting Martha’s Moments Together campaign to help the hospice care for more families like hers in the future.”

For more information about St Giles Hospice and how you can help, please visit www.stgileshospice.com/momentstogether

St Giles Hospice is a registered charity offering high-quality specialist care free of charge for people living with diseases which are terminal or incurable as well as providing support for their families and carers.

Patients come from across the hospice’s catchment area, which ranges from Ashby-de-la-Zouch and Atherstone in the east, to Cannock in the west – and from Burton and Uttoxeter in the north, to Sutton Coldfield and Coleshill in the south.

Care is offered at the hospice’s centres in Whittington and Sutton Coldfield and in patients’ own homes across the region.

St Giles spends over £10 million a year providing its specialist services and with little more than a third of this funded by the Government, the registered charity relies heavily on donations and income generation from the local community.