Helping patients “live well until they die”: The role of Tai Chi 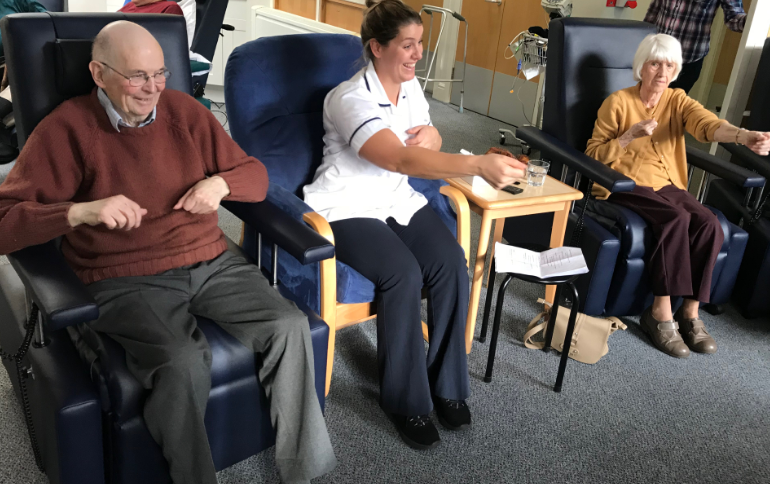 Andy Bradshaw, a PhD Student at the University of Leeds who will be speaking at Hospice UK’s annual conference later this month, shares insights from his research looking at the benefits of Tai Chi in hospice care.

During the last three years I have been privileged enough to volunteer and conduct research within the day therapy unit at Sue Ryder’s Wheatfields Hospice in Leeds.

By working closely with patients in this environment, I have witnessed the profound ways in which living with terminal illness affects them physically, psychologically, and socially. However, what has struck me most during my time at Wheatfields is how terminal illness represents an opportunity for growth and enrichment.

Key to facilitating this is the role of palliative care providers, who through adopting a holistic and multidisciplinary approach to healthcare, can help patients to “live well until they die”.

A key facet of palliative care is rehabilitation. This uses physical therapies, such as exercise and other physical activity, to preserve patients’ quality of life through empowering them in adapting to, and coping with, illness-related issues.

In working towards achieving the goals of palliative rehabilitation, the therapy team at Wheatfields deliver weekly adapted Tai Chi sessions to out-patients who visit the day therapy unit.

My research was centred on exploring how taking part in these sessions impacted upon patients’ perceptions of quality of life. To do this, I spent a period of six months in the hospice’s day therapy unit collecting data through interviews, observations, and conversations. In total, 19 participants with a range of advanced illnesses took part. The following draws on the study’s findings.

The pleasures of mind-body respite

Being diagnosed with a terminal illness brought many patients into unknown and unfamiliar territory; it was a place in which their minds and bodies often felt like perpetual battlegrounds. They told stories of fear and loss, explaining how physical deterioration often trapped them in constant states of pain, fatigue, and weakness, whilst the prospect of death and dying instilled a profound sense of fear.

Taking part in Tai Chi, however, was a way through which patients could improve their perceptions of quality of life through gaining respite from the physical and psychological distress of their illness.

This was because the gentle movements, music, and imagery of Tai Chi enabled them to re-direct their awareness away from thinking about their worries and fears and onto being present in the moment. It also helped them to experience their bodies in pleasurable ways through fostering states of physical relaxation, restfulness, and revitalisation.

In these ways, Tai Chi helped patients to craft a new relationship with their minds and bodies, one which was characterised by pleasure, peace, and tranquillity as opposed to trauma and chaos.

Speaking of this, Jane*, who suffered from advanced gastrointestinal cancer told me:

“The mind and body work together in it. You’re doing your movements which are very relaxing movements without doubt, and as you’re relaxing, your mind starts to relax, you stop thinking about things … the energy that keeps you bustling around, that goes out of you and your whole body and your mind, you just sort of come to peace.”

Alongside the physical and psychological distress that their illness caused, many patients spoke about how disease-related progression had resulted in the shrinking of their social worlds, causing them to feel socially and emotionally isolated.

Hospice-based Tai Chi helped to alleviate these types of loneliness through bringing patients together under a shared activity in which they could connect with each other in meaningful ways.

It acted as a platform through which patients could use their own experiences of illness to reach out to, empathise with, and support others. This was of particular importance to those who felt as though having an advanced, incurable disease caused them to take from and burden those around them.

Speaking of this, Judy*, a patient with lung cancer spoke:

“[During Tai Chi] I feel I’m part of something that benefits everybody and it’s nice to feel that you are doing things that will help other people, no matter how small a way. I can’t do what the nurses do, but if in some small way, I mean sometimes you just have to hold somebody’s hand for a few minutes, just to make them feel a wee bit better and it’s just things like that … I just feel that warmth of healing … we seem to respect and care about each other”

The Role of Mindful Movement in Palliative Care

As the need for palliative care is set to rise in the coming years, it is crucial that hospices continue to seek out methods that are able to contribute to improving patients’ quality of life. This research has demonstrated the role that mindful movement therapies such as Tai Chi may play at achieving this.

By integrating these types of interventions into clinical practice, hospices can further work towards achieving the fundamental goal of palliative care: to help patients live well until they die.

*Names of patients have been changed.