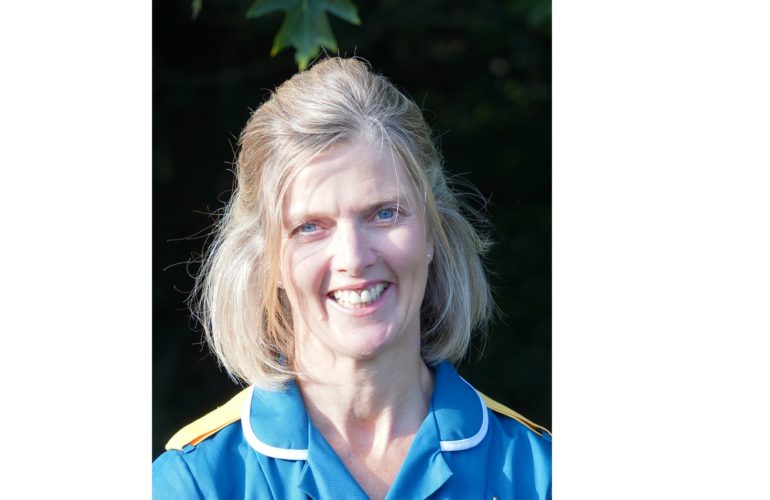 Sally Reed is the first Trainee Nursing Associate (TNA) at Hospiscare in Devon. Here she explains what this apprenticeship involves and what she’s learning from it.

One year ago, Sally decided to embark upon a new chapter in her life by taking on the role of TNA at Hospiscare.

Sally comes from a healthcare background, having spent the past ten years in general practice as a healthcare assistant. Despite always having an interest in palliative care, she felt she had left it too late to pursue anything further in her nursing career, but one email changed all of that.

She explains: “I had done some fundraising for Hospiscare in the past so the charity sends me newsletters. In the summer of 2018, I received one of the e-newsletters and this job opportunity was in there. It felt like it jumped off the page at me!”

Sally’s training has been intensive in order to prepare her for all forms of nursing. After spending six months on the ward at the Exeter hospice, Sally worked in the community with the Exmouth Hospiscare@Home team. “It is a different experience nursing patients in their homes and very useful for me to see how Hospiscare@Home is set up” she says. “They’ve got a great team out there. My varied community placements helped me to see how Hospiscare works as a whole and to see how it joins up in the community.”

After a year of training across palliative settings, Sally embarked on a four month placement at the Royal Devon & Exeter Hospital. As her nursing qualification is from birth to death, Sally has placements on the children’s ward as well as in oncology and general medicine. “I am really grateful that Hospiscare have worked with the hospital and put these experiences in place so that at the end of my qualification, I can feel as prepared as I need to be” she says.

At this half-way point in her training, Sally says she has no regrets. “It did feel really hard at times, especially in the beginning, but something drove me on and I just knew it was the right thing for me to do. It’s the same with anything that you take on; you can’t expect it to run smoothly the whole time. I know that I am growing through it; I have changed through the experiences I have had so far and it has given me a lot more confidence within my work.”

This year is the International Year of the Nurse and Midwife. Each month Hospice UK is profiling a different nurse to highlight the vital work they do – watch the videos on their YouTube channel