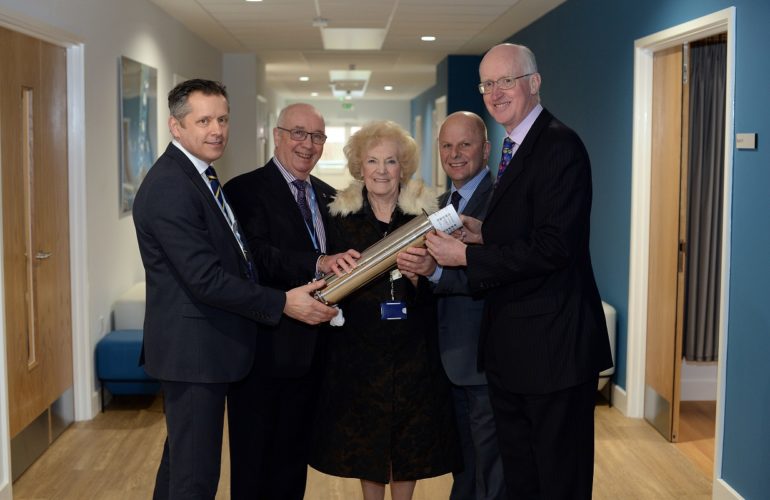 Fair Havens Hospice in Essex has paid tribute to its longest serving volunteer, after she died in the hospice she had supported for more than 37 years.

Following a short illness, Pearl Naylor MBE was cared for during her last days at Fair Havens, the hospice that she had championed since its inception and served right up until lockdown.

Pearl, 95, was volunteering even before the hospice opened its doors to the first patient in June 1983. She had been a member of Shoeburyness and Thorpe Bay Baptist Church since the early 1980’s, where she heard about the volunteering opportunities at the newly formed Havens Christian Hospice charity, now Havens Hospices, of which Fair Havens is a part. A group of local Christians had identified a need for hospice care in south Essex, as they felt that there was a demand for a special type of care for people at the end of their life. This is a statement Pearl immediately identified with.

After nursing her father through cancer, she felt alone and helpless. Giving her time for free for a cause that could have supported her family was Pearl’s way of giving something back – letting others in similar situations know that they are not alone.

Since 1983, Pearl had been involved with pretty much every aspect of Fair Havens from cooking Sunday lunches, cleaning the patient’s bedrooms, baking cakes for fundraising stalls, answering telephone calls at reception and comforting bereaved families. She remembers the days when money from collection pots were counted on the table so they could pay the nurses, and Fridays meant tea and scones in the lounge.

Pearl also volunteered at Southend Hospital. Mostly working on the Central Information Desk, she devoted more of her time to the Strokebusters Appeal, following her beloved husband Jim’s death in 2006. She became a role model, a mentor and confidante for other volunteers and staff past and present at both organisations.

She collected many honours during her volunteering, but was always humble in accepting these, insisting that she was doing so on behalf of the hospice and hospital. In 2009 she was bestowed a League of Mercy – the highest award for volunteering in the UK.

In the New Year’s Honours a year later, she was awarded an MBE, saying, “I can’t quite understand why they chose me, there are so many people who volunteer and I am so happy to do it. Fair Havens is a huge part of my life.”

She was even featured in a national exhibition at the gallery@oxo space in London 2014, dedicated to hospice volunteering to highlight the role people like Pearl had played in the hospice movement.

Speaking at the time, original founder of Havens Hospices Daphne Hall MBE said, “Pearl is a wonderful example of someone who was prepared to give her time to help and support patients and relatives and she has been doing this in quiet, humble and gentle ways for so many years. I cannot imagine Fair Havens without Pearl and the hospice will be eternally grateful for all the love she has demonstrated over many, many years.”

Pearl continued to volunteer almost every week throughout her life and was a familiar and friendly face to thousands of patients and their families over the years, as well as the staff and volunteers she worked alongside.

Because of her deep connection with Fair Havens, Pearl helped to carry the hospice’s ‘angel’ statue from the old building to the new facility when it opened in March this year. She said, “I started off doing tabletop sales to raise money and on my last day at the old hospice I swept the floors and said goodbye to the building. This is a new era and a new start for us all.”

Pearl had every intention of continuing her volunteering duties at the new hospice, having visited the site throughout construction, and she was guest of honour at the official handover, where she placed a message inside a commemorative time capsule which is buried within the grounds.

However, as the coronavirus pandemic took hold, volunteers were asked to stay at home. Despite this Pearl still drove herself to the hospice a few times to see the Care Team, keeping her distance but wanting to check that they were all OK.

Wanting to do her bit for the charity as its income was falling, Pearl even arranged her own version of a marathon inspired by Captain Tom Moore, walking 26 laps of her garden cheered on by grandson Ryan and his wife Mel. Her personal donation and those from her friends were topped up after sharing her efforts on Facebook, raising almost £700 in total.

Reflecting on Pearl’s life and contribution to the hospice, Chief Executive Steve Smith said, “This place will not be the same without Pearl, her friendly face greeting us all as we come to work. She had given so much to the charity, it was our honour to care for her at the end of her life.

“I would like to pay tribute to our Medical Director Dr Tosh, the Hospice at Home and In Patient Unit Care Teams who looked after Pearl and her family. I recognise how difficult it must have been for them, and the other teams who had a close relationship with Pearl.

“Pearl wanted to be at Fair Havens, and thanks to our wonderful community supporting our new hospice, this was able to happen. We will ensure that Pearl’s contribution and legacy lives on at Fair Havens and will work with her family on a fitting tribute.”

Pearl’s daughter Anita Philpott has set up a fundraising page to raise funds for Havens Hospices in Pearl’s memory. She said, “Being at Fair Havens was something she looked forward to, indeed it was her last great adventure. She was wrapped up with so much love and care. It was the perfect ending to a perfect life.”