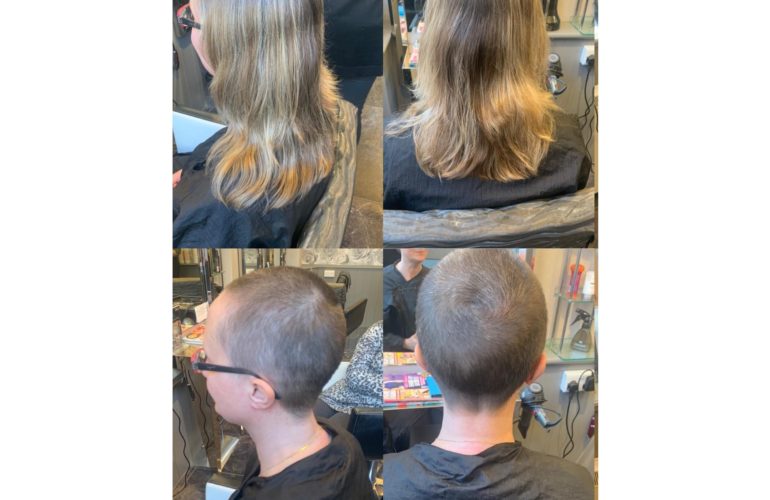 A Healthcare Assistant who works as part of the Hospice at Home team at Nottinghamshire Hospice has doubled her fundraising target for the charity after shaving her head in solidarity with cancer patients who lose their hair through chemo.

Teresa Williams signed up to have her head shaved on the anniversary of her mother’s death, with an original fundraising target of £500. She has so far raised £1,143 with more pledged.

Teresa said:  “I was nervous on the day but kept in mind the many patients who have no choice but to lose their hair because of chemotherapy. I feel very thankful to be in good health myself.

“I kept my eyes shut while the clippers cut my hair. When I opened them it was quite shocking but I soon got used to it and now I can literally just ‘wash and go’.”

“Working for the hospice I see first-hand the benefits it provides to patients and their families. This has been my opportunity to give something back and raise awareness.

“I’m so thrilled with all the donations people have given to the hospice.  I highly recommend a head shave as a fundraising idea!”

Teresa’s mother Mary was cared for in a hospice in Letchworth, Hertfordshire at the end of her life in 2013 after being diagnosed with breast cancer eight years previously. Teresa was given a family room at the hospice so she could stay there too and was impressed by the care her mother received there.

She said: “In the final year of mum’s life she became really poorly and didn’t want to be alone. With me and other family living some distance away this put a huge strain on our lives. In mum’s area there was no Hospice at Home service which would have made a huge difference to us. So I want to make sure people are aware of the service that Nottinghamshire Hospice provides, especially where I live in Mansfield.”

After her head shave, Teresa is now sporting headgear in the hospice’s corporate colour purple.