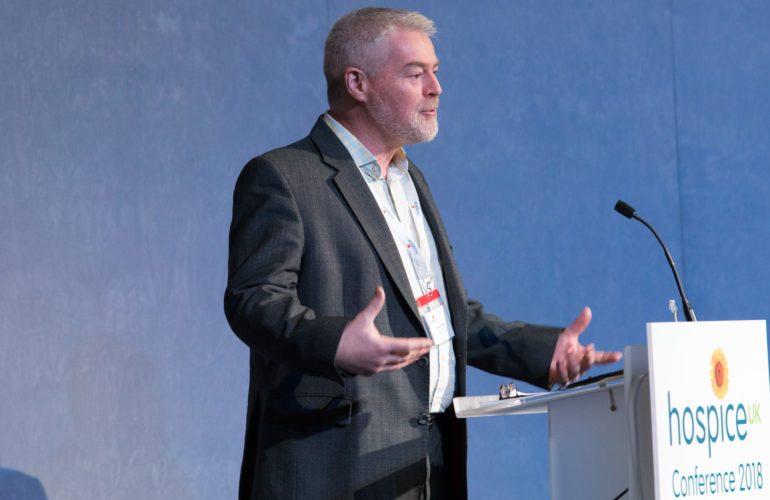 The first day of Hospice UK’s national conference addressed the need for radical change in the sector and the challenges young adults with life-limiting conditions face.

Re-invention of course, but how do we do it?

The day kicked off with talks on financial challenges, mergers and community development. Hospice UK CEO Tracey Bleakley’s keynote speech on the evolution of hospice care was followed by a plenary that covered reinvention and how to put this into practice, with Dr Heather Richardson and Sean O’Leary, joint chief executives of St. Christopher’s Hospice in south London.

The two CEOs explained how last year, the 50th anniversary of the modern hospice movement led them to think about the future of their hospice and ask colleagues the question: is hospice dead? The response was a resounding no, that there is still too much work to do.

As a result the hospice looked at the changing picture of dying – people living longer, different conditions and needs, and an increase in loneliness and social exclusion. They looked at and drew comparisons between four different models of hospice care and the television shows Doc Martin, How To Look Good Naked, DIY SOS and The Apprentice, to illustrate the differences between private sector care, personalised care and community-driven services, concluding that they need to move towards the two latter models.

Throughout the morning there were sessions on wide-ranging topics including living well with dementia, justice and ethics, and the impact of Brexit on the charity sector,  which looked at the implications of a no deal Brexit and the difficulties that are likely to arise with accessing medicines, medical research, and delays to getting drugs through customs.

An afternoon session chaired by Claire Henry MBE, Hospice UK’s Director of Improvement and Transformation, included a screening of the short film Bounce Back Boy, based on the true life story of Josh, who was severely assaulted as an infant by his birth parents, which left him needing a wheelchair and unable to speak. He was then cared for by his adoptive mother Lynn Cawley, however she struggled to get adequate care for him as he neared the end of life –  his support ended when he turned 19, as he was left in limbo between children’s and adults’ services.

The film is a monologue in Josh’s words, looking back to his birth, life and death. It is a powerful, angry and yet at times funny story, reflecting both Josh’s and Lynn’s characters. In the emotional clip, after describing how the relationship between his foster mother Lynn and her partner Ruth was being affected, as well as his  sister’s  (who is currently  suffering from PTSD ) Josh says: “ we’re all going downhill,  so I guess it’s time to take my final bow.”

Lynn’s talk was equally frank and emotive, as she explained how Josh’s death was “not how it is in Eastenders, it was messy, long and painful,” but also peppered with humour as she later said “it annoys the heck out of me that he was referred to as someone with complex needs. He was a terrible flirt, and there is nothing complex about that!”

In the second plenary of the day Dr Lorna Fraser, senior lecturer at the University of York and director of Martin House Research Centre, highlighted the urgency for high quality research in paediatric care, and the importance of collaboration, citing that over 5000 children die in England and Wales each year, and that the number of children with life-limiting conditions has risen by 50 per cent since 2000.

She explained how vital research is to improve care and prevent harm. Martin House Research Centre opened in January 2017, and a consultation they recently led identified over 250 areas that need to be prioritised, including transition, bereavement support with an emphasis on spiritual and religious support, and involving children in decision-making.

After her session Hospice UK’s Lifetime Achievement award was given posthumously to Martyn Callaghan, the former CEO of St Leonard’s Hospice in Yorkshire who died in July this year, in recognition of his work for the hospice movement. The award was accepted by David Dixon, chair of trustees of the hospice.

Further sessions covered Project ECHO, embracing ageing, and how children and young people live with life-limiting illnesses. The latter was introduced by Alison Cook, honorary research fellow of the faculty of wellbeing, education and language studies at The Open University, who explained that a major problem for young people is how their prognosis impacts their education, relationships and sexuality.

Dr Susan Madge, Consultant Nurse and Associate Director of the Adult Cystic Fibrosis Centre at the Royal Brompton Hospital in London, explained how they have developed an Advance Care Plan for patients with cystic fibrosis, a first of its kind since the condition is almost always diagnosed in childhood, and longer survival rates have meant that conversations about end of life planning are not happening as often as they should.

Next Lucy Watts MBE gave a passionate talk on how carers and families need to have honest discussions about sex, sexuality and relationships with the young people they are caring for, an area that is highly neglected. Lucy, who has faced battles to get adequate care for her condition, said that palliative care transformed her life. “When I was asked, “what do you want to do now?” it was first time I had ever been asked this question. I said I wanted to make a difference, and palliative care kept me going mentally. However sex and sexuality were completely off the radar as the priority was to keep me alive.”

Lucy explains that it was only when she met someone who was researching sexuality for people with life-limiting conditions that she realised no one had ever brought this up with her. “The knock-on effect was that I felt unattractive, unworthy and asexual” she said.

“We must not infantilise patients, and carers must have these difficult conversations” she said. “We face so many barriers, like the lack of social opportunities and accessible venues. How can you chat someone up when your carer is right there?” she said, to laughter from the audience. “It is not just about intercourse, it is about love, feeling attractive, and intimacy.”

Lucy added that a sexuality policy is needed, along with sexuality champions. Together for Short Lives, along with the Open University have published studies in the field, but it is clear that there is more work to be done.

Lastly Sacha Langton-Gilks, teacher, author, and bereaved parent, spoke about planning for the death of her son from a brain tumour, and how ensuring he had a good death has been her greatest achievement to date.  His stem cell transplant was “hell on Earth”, and he died three months later with dementia. “Language matters and clarity matters” she said, explaining that the word “palliative” is hugely misunderstood, as many people think it means giving up on their child. “We need active, positive, doing language” she added.