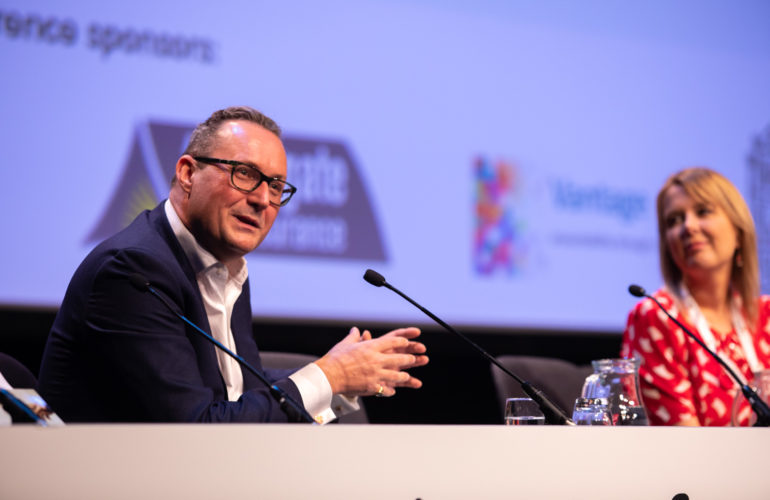 Day two of Hospice UK’s National Conference continued with a look at the boundaries between intensive curative treatment and palliative care for children, new approaches to workforce planning in the face of demographic changes, and a Research Cafe where participants had informal discussions about implementing research in hospices. The final plenary of the day featured Mark Britnell, Global Chairman for Healthcare at KPMG.

Palliative care has special significance for Mark, who has had two family members cared for by hospices in the North West of England. He has also survived prostate cancer himself, and this life event inspired his latest book, Human: Solving the Global Workforce Crisis in Health.

It follows on from his first book, In Search of the Perfect Health System, where he looked at healthcare systems around the world.  During his research he found that the biggest problem facing the health and care sectors is workforce shortage; to explain the scale of the problem he said the US, the most powerful country in the world, spends 18 per cent of its GDP on healthcare, but will be 1 million nurses short by 2030.

“The world is facing unbelievable pressures” he said, adding that there are increasingly too few workers with too much work. By 2040 there is likely to be a 42 per cent increase in the demand for palliative care, while the vacancy rate is currently at 11 per cent. The sector is facing huge challenges in recruitment and retention – though he noted that around the world a job in healthcare was a top choice for 16 – 17-year-olds, however this drops by the time they reach 21, “so we need to get them early”. Retirement is also an issue, and he added that 70 per cent of carers experience difficulties physically or mentally.

Having travelled around the world looking at different healthcare models, Mark has found there isn’t any country that does workforce planning well, but in response to a question from the audience he held up Australia as one of the best – because staff are better paid, have better working conditions, mental health and wellbeing are looked after, and there is an attitude of “working to live, not living to work.”

He believes the ways to tackle the crisis include new models of care, utilising patients as partners, communities as carers, and an entrepreneurial government. Governments have had the wrong approach, he said, as the sector is feeling the impact of austerity, and the UK must become more productive – we’re currently the second lowest productive country in the G7. Additionally, by the year 2040 there simply won’t be enough people paying taxes to fund carers to care for the elderly.

Technology must be employed, and he is currently involved in research that is analysing job descriptions to see what tasks can be supported by this. Healthcare’s human touch can be supported by digital, he said, and 36 per cent of healthcare work could be automated.

He also explained the power of communities as carers, using Germany as an example. While their health system is one of the more traditional he’s seen, Angela Merkel’s government introduced a progressive policy that let the regions give older people the option to choose family or friends to care for them, with the state providing training and guidance. At the lowest level carers are paid €800 a month, for the most complex care it rises to €1800. “Using patients as partners and communities as carers, is in my opinion the only way we’re going to solve the UK’s carers’ crisis” Mark said. “Germany can do it, so why can’t we? Imagine this army for good. You’ve seen them, you know who they are.” All these examples, Mark concluded, can be used by hospices to solve the workforce crisis.

Human: Solving the Global Workforce Crisis in Health is out now on Oxford University Press, all profits go to Prostate Cancer UK.