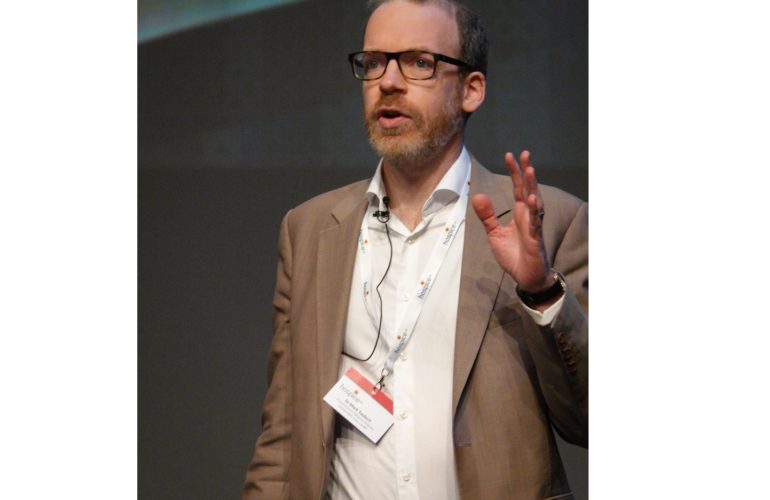 Hospice UK’s flagship annual conference opened today at the ACC Liverpool, and this year’s theme is Dying for Change. Over the next three days the event will cover subjects as wide-ranging as reputation and trust, how to equip the sector’s workforce for the future, dying as a homeless person, and “revolution” workshops to plan radical new approaches to end of life care.

Chief executive Tracey Bleakley opened the event with a speech that highlighted the increase in people being cared for by hospices despite recent financial challenges.

Tracey outlined the positive achievements that have been made in terms of funding, such as NHS England’s commitment to an extra £350 million for the hospice sector. Retail profits are holding steady at 23 per cent, and lottery income is continuing to grow at £81 million.

Death and dying have radically changed in the 50 years since the hospice movement started, and Tracey emphasised the need to look at evolution and revolution in the sector, with hospices changing their services to adapt.

Tracey concluded that next year Hospice UK will be promoting the Year of the Nurse, celebrating nurses across the sector with videos on social media published each month throughout the year, before highlighting again the incredible work of hospices helping more and more people in the face of challenging circumstances.

The first plenary of the day featured Dr Mark Taubert, Clinical Director and Consultant in Palliative Medicine at Cardiff University, speaking about the relationship palliative care has with the media. He looked at both its benefits and the difficulties that arise with sensationalist headlines and trolling on social media.

Mark became something of an online phenomenon following a thank you letter he penned to David Bowie after his death. In the letter he explained how a conversation about Bowie’s life and music had enabled him to talk to a patient he was meeting for the first time about advanced care planning and CPR, where she asked the sort of questions that “don’t normally come up until the third or fourth visit”.

The letter was published in the British Medical Journal and retweeted by Bowie’s son David Jones, after which Mark was inundated with requests to appear on national TV and give interviews to tabloid newspapers. He also received lots of touching messages from people around the world. This culminated in the letter being read out at live events by musician Jarvis Cocker and actor Benedict Cumberbatch. The editor of GQ magazine, Dylan Jones, was in attendance at one of these, and subsequently included the letter in a book he published about Bowie’s life; it is set to appear in another book next year about letters to musicians.

“The letter had important messages about CPR” Mark explained, “and it was nice how this message was able to spread, completely at random.”

Mark described the public’s general perception of CPR, and the various media campaigns advocating for it including a high profile advert featuring ex-footballer Vinnie Jones. The flipside to this, he explained, is that it’s led people to believe everyone must have CPR, when in fact it has a low success rate – for people with cancer that has spread, for instance, it is only effective 1.9 per cent of the time.

An article Mark wrote for the Guardian newspaper about this went viral. With over 100k shares it received both positive and negative comments, ranging from people agreeing that the subject wasn’t being talked about enough, with some GPs saying they would print this out for people to read in their waiting rooms, to those arguing that every life is precious and good CPR must be promoted.

Social media often taps into the emotional side of the brain, Mark explained, and is not so good at backing arguments up with facts. Therefore it is important for healthcare professionals to be careful with what they believe. He cited the case of Charlie Guard, where lots of individuals had formed strong opinions and emotions despite not having all the necessary information, and he’d found himself feeling sorry not just for the parents but also the staff facing protests each day when they went into work.

In the early days of social media the General Medical Council (GMC) advised doctors to stay away from it, but they now have standards of practice that include making sure information is factually accurate and can be checked.  The British Medical Association is also positive about using social media for good, and to promote public health campaigns. For those not normally interested in Twitter, Mark recommended following journals, and even searching for information under “palliative care”.

He then talked about widening access to important information. Mark and his team worked on a series of videos with TalkCPR along with patient and carer groups in their local community in western Wales. The videos were made available in GP surgeries on video media pads, which are rechargeable and can be cheaply produced, and have made it possible for more people to have conversations about this difficult topic.

His session concluded with useful tips for dealing with TV cameras and press requests, including GMC and BBC guidance such as what code journalists should abide by, obtaining consent to broadcast, ethics, and ensuring the title of the programme is always discussed upfront to avoid sensationalist stories.