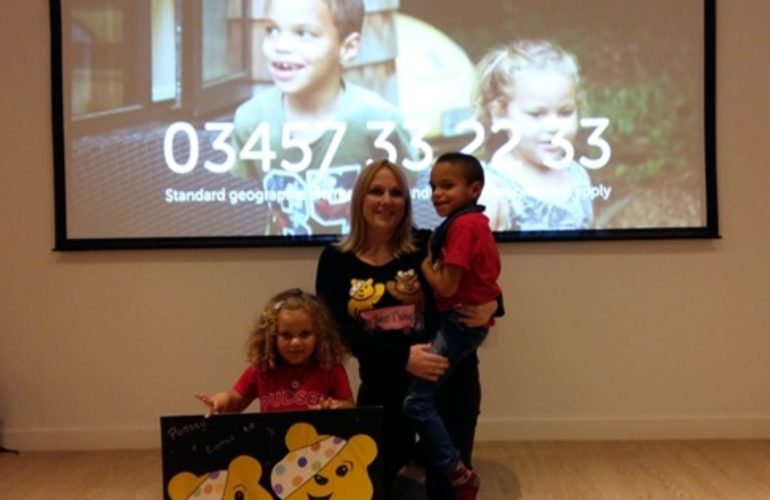 The coverage featured the story of seven-year-old  Kristian, who has Lennox-Gastaut Syndrome, a rare form of epilepsy where seizures can be non-stop. He requires round-the-clock care and has no concept of safety. His only way of communicating is to cry, laugh or smile.

Introduced by Strictly Coming Dancing judge Len Goodman, the film showed all the ways that Haven House in Woodford Green supports Kristian- who has received support from the hospice for the last five years – and his family.

When Kristian is at the hospice for respite care he has time to enjoy a whole host of activities with healthcare support worker Stacey Bishop who is funded by Children in Need.

His parents, Mel Rinaldi and Sean Marshall, were referred to Haven House by staff at Great Ormond Street Hospital in 2011, after they realised that they desperately needed some respite from the 24/7 demands of looking after her son.

Mel said: “Haven House is a lifeline. They have got everything you could possibly think a child would want. But the biggest thing is that Kristian can be somewhere where he is completely free. For him it must be paradise.”

Mike Palfreman, Chief Executive of Haven House, said: “We are absolutely thrilled to have been a part of this year’s BBC Children in Need appeal.

“To be able to raise awareness of the care we give to Kristian and other life-limited children in our area in front of millions of viewers is a rare opportunity.

“We are so grateful to Children in Need for their continued support of our hospice and of course to Mel and Sean for bravely speaking about the difference we make to their lives.”

Thanks to money from Pudsey, young Harry has received pre-bereavement support to help him come to terms with his sister Sophie’s life-limiting illness.

Sophie who has Down’s Syndrome is blind, suffers from chronic lung disease and severe epilepsy which has caused her many additional health problems.

Natalie Watson, whose position of Bereavement Support Worker at Keech Hospice Care is funded by BBC Children in Need money for two years has helped Harry overcome his worries.

“Children tend not to have the words to describe how they’re feeling so it’s important to offer them different ways and Harry benefitted from creatively exploring his worries and was able to leave them behind,2 she said. “Harry also created a memory jar which helped him to share some very happy and difficult memories of his sister Sophie.”

Harry’s mum, Kelly described the support that Keech Hospice Care had given Harry as” life changing”.

You can read more about Harry’s story on the hospice’s website.

Other hospices which featured in the Children in Need included Claire House Hospice in Liverpool.