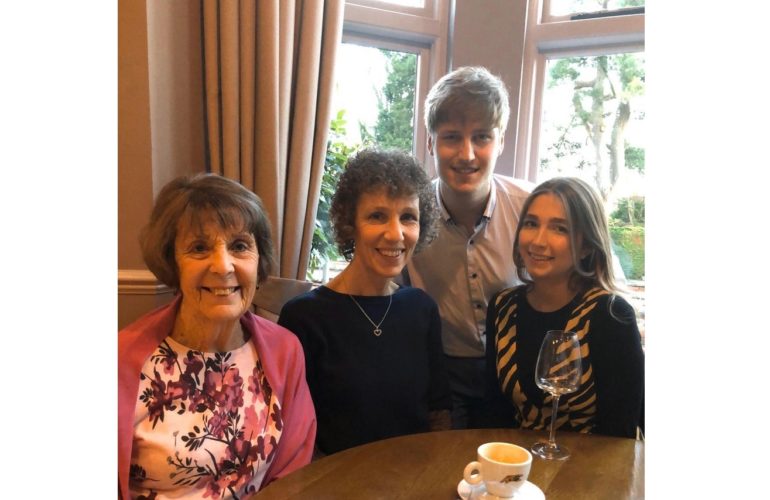 June with daughter Karen and grandchildren Frances and Sam

Star of Channel 4’s Gogglebox June Bernicoff died in May this year after being cared for by The Myton Hospice in Warwickshire. Despite the coronavirus pandemic, the charity’s hospice at home team were able to make June and her family feel as comfortable as possible.

June Bernicoff was known to people across the country as one half of the infamous partnership of June and Leon on Gogglebox, but to Helen and Julie they were simply mum and dad.

The couple appeared in the popular TV series from its beginning in 2013 and were firm favourites with viewers until they left the show in 2017. Helen still finds it unreal to think of her parents as television personalities, but knows how much joy it brought them both.

June was described as the linchpin of the family and always there for them, encouraging, supportive and with a loving, sensitive and common sense approach to life. She moved to Warwickshire in October 2019 to be nearer her daughter after her husband Leon died, but began to suffer with back pain around Christmas. She was eventually admitted to hospital in April with swelling in her stomach, which resulted in her being diagnosed with pancreatic cancer.

Helen said: “It was a very rapid decline after her short hospital stay. She moved in with me so I could care for her, the doctor telephoned weekly and the palliative care nurse got involved too. I was thankful to have her at home but it all became a lot easier when Myton got involved.”

Since the Covid-19 outbreak began the hospice has enhanced its Myton at Home service so that more people can die in their preferred place of death – often at home, surrounded by family and friends.

“We both looked forward to the Myton at Home nurses’ daily visits” Helen said. “It was the little things they did which really made a big difference, like washing her hair, making her comfortable, and keeping the pain under control. They showed us how to move and turn her in bed without causing discomfort, and they were also honest about her deterioration. We very much appreciated their warmth and kindness.”

The Myton at Home team arranged for a wheelchair to be loaned to June so she could get to see the garden. When it was clear that she didn’t have long left, the nurses were open and honest with the family. This meant June’s granddaughter was able to travel to see her one last time.

June died on May 5th at home with Helen. Helen says she remained strong, elegant and dignified until the end. What she will miss most about her is her presence, not having her on the other end of the phone, going out for a coffee, glass of wine or visiting the theatre.

“Mum was positive throughout the illness, and we followed her lead” Helen added. The care Myton gave was very much for our whole family, and they even checked in with me after she died to see how I was doing.”.