People & Places I’ve been given a terminal diagnosis so it’s not going to end well... - ehospice 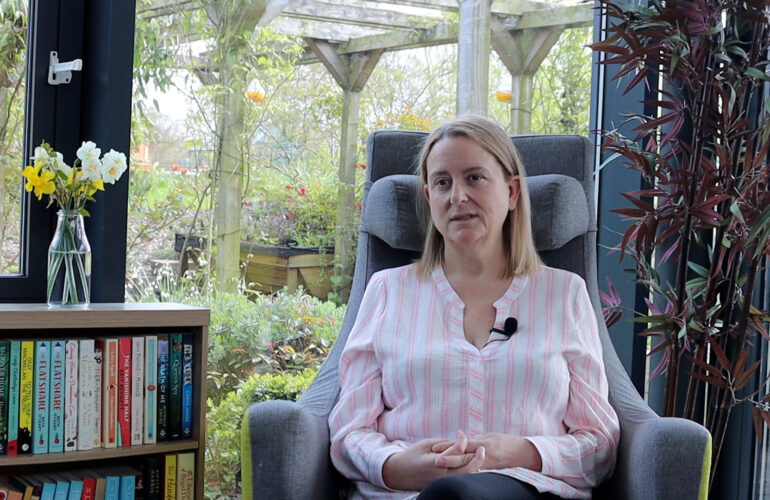 …but I’ve got the benefit of being able to deal with this. Hospice patient encouraged conversations about death and dying in support of Dying Matters Awareness Week.

Fifty-two year old Tracey Morrell was diagnosed with terminal bowel cancer in 2020. She shared her story during Dying Matters Awareness Week, 2 to 6 May, to encourage people to have open and honest conversations about death, dying and bereavement.

Tracey, from Weston-on-Trent, has been receiving wellbeing and emotional support from end-of-life charity Treetops Hospice.

She explained how people often react when she talks about her diagnosis:

“There’s a lot of denial. People often say to me ‘you look really well’ or ‘you’re going to be alright; you’ll fight this’. But I’ve been given a terminal diagnosis so it’s not going to end well or end the way I want it to end.

“Some people tell me I’m brave which frustrates me. I’m not brave at all. I’m dealing with what life’s throwing at me and I’d rather not be dealing with it. Sometimes I just want to pretend it’s not happening.

“I’m not owning their reactions. It’s down to them. However, they want to feel, they’ll feel. I get that people will be upset and I’ve had a few people cry on me but coming to Treetops has helped me deal with this.”

This year, Dying Matters Awareness Week encouraged people to consider what it means to be ‘in a good place to die’ – physically, emotionally, practically, spiritually, and even digitally.

Tracey has started to make plans for the end of life including making a Will, organising finances, and planning her funeral.

“One of my biggest fears is leaving people behind, like my husband, and how they’re going to cope without me. I’ve tried to do as much as I can to make it easier for everyone when I’ve gone.

“There are things that I want including in my funeral and I’ve picked the celebrant and some music. It’s so important to tell the people around you what you want because it makes it easier for them. Rather than them having to make all the decisions and worrying about whether it’s what you want or not, just tell them.”

“It’s really important to me and it’s also helped me to get my head around the fact that this is going to happen. I’m a list-maker so if I’m ticking things off my list, my head gets clearer and helps me focus.

“Now I’ve dealt with all of those things, all I’ve got to concentrate on now is enjoying myself and my quality of life.”

Tracey has a large following on her Twitter account where she has been regularly sharing her experiences of her cancer and treatment. She has made plans to continue updating followers as her health deteriorates:

“My social media accounts are so important to me, but I know there’s going to be a time when I’m not going to be able to update them. So, I’ve asked my two best friends to take over my accounts for me to keep everybody updated with where I’m and how I’m feeling.

“I’d like the people that follow me to know that I am in decline. People need to see that side of things as well. It’s not all flowers and sunshine.”

Treetops has a wealth of free resources and guides to help people begin to discuss subjects which are often seen as taboo, such as end-of-life care, funeral wishes and making a Will.

Tracey has helped Treetops Hospice create a series of short videos sharing her experience which can be found on the Treetops You Tube channel: https://www.youtube.com/c/treetopshospice

For more information about starting conversations about death, dying and bereavement, head to: www.treetops.org.uk/dyingmatters

Treetops Hospice, the leading end-of-life care charity in Derbyshire and Nottinghamshire, provides nursing care and emotional support for adults with life-limiting conditions, and their families.

The charity provides support from diagnosis onwards for patients with conditions such as cancer, motor neurone disease and heart and respiratory conditions.

Founded in 1983, Treetops supports thousands of local people – and their families – through the most difficult time of their lives. Last year, our team of over 40 Hospice at Home nurses provided over 23,800 hours of care to terminally-ill patients, working day and night to give much-needed support.

We have a team of bereavement counsellors who provide over 4,000 counselling sessions – over 900 of them to children and young people. Wellbeing team members provide valuable information and support to those who need it, while our experts in end-of life care and bereavement support dedicate many hours to training NHS staff about death and dying.

Treetops are lucky to have over 450 amazing volunteers who help to keep the hospice running smoothly.

It costs £4.2m each year to run the hospice. A counselling session for a bereaved child costs £34. An overnight Hospice at Home nursing shift for a patient at the end of life costs £108.

Treetops is doing all it can to continue to support those in most need and welcomes donations to ensure the future of the hospice and its services: www.treetopshospice.org.uk/donate