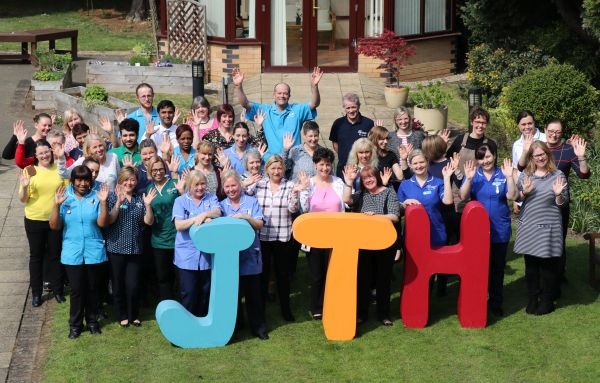 John Taylor Hospice in Birmingham is celebrating its 110th anniversary next year, and is inviting all former colleagues to come together this autumn for a special reunion. We take a look at the hospice’s history over the last century.

John Taylor Hospice was founded in 1910, named after the late gynaecologist Professor John Taylor. This new home for the “dying poor” was thought to be an appropriate commemoration to his contribution to the local Women’s Hospital.

His colleague Dr Mary Darby Sturge took the helm, and a small house adjacent to the hospital was found to accommodate five beds, at a maintenance cost of £300 per year.

The Taylor Memorial Home of Rest was given considerable support by a number of influential people including the MP for Erdington Sir Arthur Steel Maitland who agreed to be president of the proposed institution.

At the first annual meeting it was reported that the five beds had been occupied continuously and many more patients had to be refused – there was an obvious need for larger premises. In September 1911 the Management Committee of the Women’s Hospital purchased a second site, planned to resemble a family home in recognition of the fact that those approaching the end of life are still a part of life – the beginning of John Taylor Hospice’s ‘Taylor-Made’ approach.

The Taylor Memorial Home of Rest was not a religious institution unlike many homes for the dying which at this time were set up to save patient’s souls. Instead, emphasis was placed on the care of the patients, making them as comfortable as possible.

The outbreak of war in 1914 brought about a concerning shortage of staff. Previously the Women’s Hospital had supplied nurses for the home but by June 1917 the hospital informed the committee this would no longer be possible.

The home was also under constant financial pressure. This was alleviated in the following year by the Women’s Hospital, who gave the home £900 from the money raised by an appeal to pay off their own bank overdrafts.

Despite financial pressure throughout the war Dr Mary Darby Sturge was very anxious to establish a pension for those members of staff dedicated to the service of the home. In April 1923 she reported that £100 had been collected to supply a pension for the senior sister and a further £90 to start a benevolent fund to provide pensions for other staff.

Mary also presented a pamphlet on the need for nursing staff accommodation, though unfortunately she was unable to see her plans come to fruition as she died in March 1925. However her legacy continued – a fund was begun in her memory by her family to improve accommodation for nursing staff and provide additional single rooms for patients. This fund eventually paid for the new Dr Mary Sturge Memorial Wing which opened on 1 April 1926.

The aim of the Taylor Memorial Home was ‘the relief of the pain, discomfort, and the fear associated with dying’. Staff did not pretend to be able to cure the patients but instead did something equally necessary – they ‘alleviated the pain of the sufferers all they could and comforted them in every possible way’.  This philosophy struck a chord with local people and many continued to donate money or gifts-in-kind, specifically for the provision of extra comforts for patients.

During 1940-1 the bombing raids over Birmingham forced the committee to look for a location in quieter surroundings. The home reopened in April 1941 in Cannock Chase. Here the shortage of staff became acute, with only two nursing staff for far more beds, so only patients who were convalescing from radium treatment and did not need nursing at night were admitted.

The intention had been only to remain at Cannock Chase for the duration of the war, but at the annual meeting of 1946 it was reported that the Women’s Hospital had taken over the original site, preventing the Taylor Memorial Home’s return. In 1948 the committee purchased another building – the previous home of Sutton Coldfield Conservative MP and renowned photographer Benjamin Stone.

In July of the same year the National Health Service Act came into effect. The Chair of the new Committee Mr Grosvenor stated that he looked forward to his association with the new scheme and he wanted the meeting to close “with the feeling of confidence in the knowledge that the new Health Act was not only desirable but capable of administering a great service to the sick”.

The event to celebrate the hospice’s anniversary takes place on Thursday 10 October and all former staff and volunteers are invited. Hospice Head of Brand and Media Diane Parkes said: “Our 110th anniversary is a really special event for John Taylor Hospice and we want to share it not just with our current staff but also with the hundreds of people who have been part of our story.

“It is the dedicated work of these former colleagues which has ensured we are the hospice we are today. We want to say thank you, give them a chance to meet with old friends and share our plans for our 110th anniversary.”

The evening will include refreshments, information about the anniversary celebrations and a chance to view old photographs and other mementoes. The reunion is free but people are asked to register in order for the hospice to manage catering.

Diane added: “We have been doing lots of research into our history as part of the 110th anniversary and we will be sharing the results of some of that research at the event. And we’d love former staff and volunteers to bring along pictures and other memorabilia on the evening.”