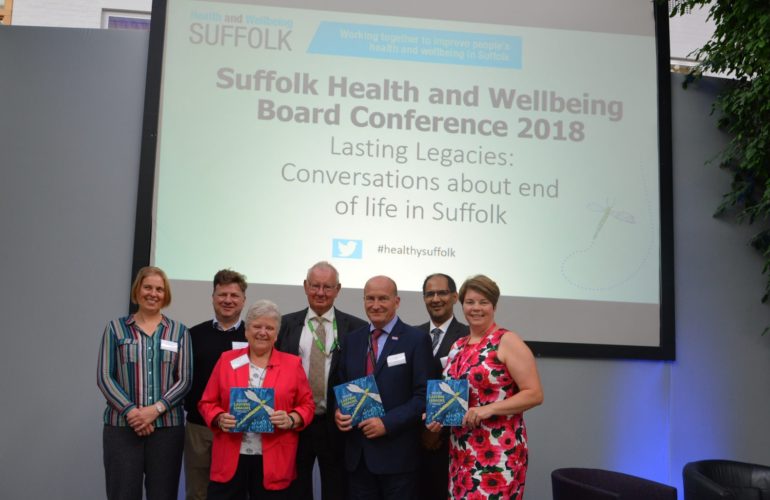 Toby Scott, Hospice UK’s Head of Communications and Campaigns, writes about attending a day of workshops and talks on end of life care in the East Anglian county.

Each year the Suffolk Health and Wellbeing Board organise a conference and launch a report to focus on a different priority for the people of the county. This year’s focus is on end of life care, and the 2018 conference brought together professionals, partners and stakeholders. I was invited to speak about the Dying Matters campaign on behalf of Hospice UK.

The event was not open to the public, although the report is aimed at them, and to respect confidences I will not attribute quotes. However, another more general write up and links to the report can be found here.

The most obvious thing that came out of the day is that there is a lot of interesting and innovative work happening in end of life care across Suffolk. I suspect this is true of almost everywhere, and one of the challenges for a national organisation like Hospice UK is finding these and sharing them widely.  The invitation-only event drew people from hospices, hospitals, charities, faith groups, social care and more.

Although the report is specific to the needs of Suffolk – including the fact that life expectancy for men in the poorest parts of the county is seven years shorter than for men in the richest – much of it easily universal. We heard about compassionate communities, faith and diversity, and work with children and young people.

The format of the day was of speeches, followed by workshops, more speeches and the workshops again. I chose to go to a session that used the well-known Gravetalk cards. Produced by the Church of England, they are a series of questions designed to prompt conversation about end of life issues, but also wider topics such as “where is your favourite place?”

St Nicholas Hospice Care has taken the basic Gravetalk idea and produced a subset of questions for children and young people, for use in schools or with youth organisations like the Guides or Scouts. In our workshop we worked through all of these, and as well as having some powerful conversations ourselves we discovered how these are being used, especially the Life’s Questions set for young people.

After lunch we had a performance from the Pop Chorus Choir, which brings together older, bereaved or otherwise isolated people for singing, fun and friendship. The day closed with a talk from the Brainydogs project. This takes rescue dogs, which are then trained by prisoners at HMP Hollesley Bay to be companion dogs for people with brain injuries or with a life-limiting neurological condition. It is a brilliant project, helping people in need of a friend as well as proving a welcome activity for prisoners.

We also heard from NHS England about how personal health budgets are transforming end of life care, and saw a brilliant short film asking people across Suffolk why talking about death is so hard.

But what stayed with me most was a speaker, a healthcare professional, whose wife died earlier this year. She was able to die at home, as she wished, and he spoke about the compromises needed for this to happen, especially in more rural areas. He also apologised for his bad back. This had not happened from lifting her, as he had been given training in how to lift safely. Rather, since she died he had been sleeping on the couch as he could not bear to sleep in the bed she had died in. We can plan for how we die, and there are some great projects in Suffolk to help us do this. But we ca not plan for how we will react to the death of someone we care about, and in Suffolk and across the UK we need to get better at helping each other.