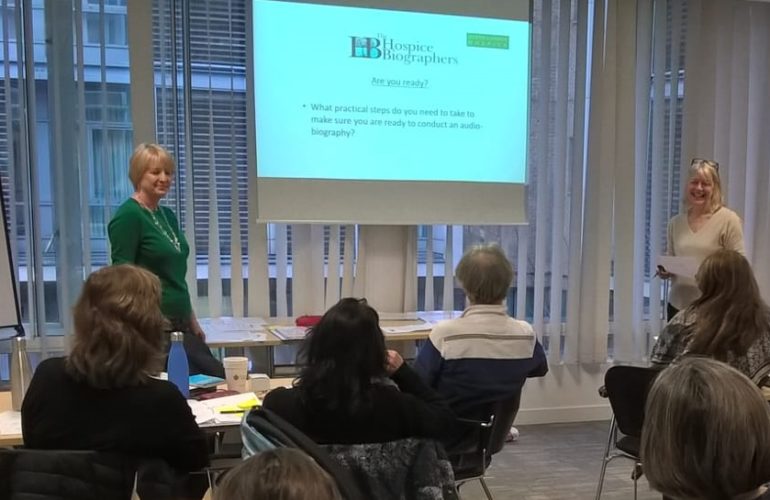 How do you record someone’s precious life story on audio? What about if they are terminally ill? ehospice editor Leila Hawkins met with the Hospice Biographers to find out.

The Hospice Biographers charity trains volunteers to enable people who are nearing the end of their lives to leave the gift of their voice behind for their loved ones, while also giving them the chance to share anecdotes and memories they may have never revealed before.

The charity was founded by Barbara Altounyan, a  TV producer who, inspired by the experience of recording her father in his final days, began volunteering as an audio biographer at Princess Alice Hospice in Surrey.

There was a keen response from patients and so she launched the Hospice Biographers in 2016. The biographers already have experience of liaising with patients at the end of life as they must already be volunteers within hospices, whether in the day centres, in-patient units, out in the community, or running bereavement counselling groups. So far around 50 biographers have been trained from 25 hospices.

Making my way to a training session at St Joseph’s Hospice in east London, I wondered how the technique of recording someone describing their life’s experiences would differ from doing a typical interview with my battered old dictaphone. I soon found out it involves a completely different set of skills.

As the person narrating their story, the patient is in control of the conversation rather than the biographer, who should only ask open-ended questions – if at all. Biographers should be non-judgemental, have no agenda, and show empathy – stories can be emotionally charged and crying along with the patient is not unusual, in fact it can even help to form a bond.

As well as learning how to use the audio equipment (which is fantastically state-of-the-art and puts my decade-old gear to shame), the training helps to prepare budding biographers for difficult situations. Patients who have enthusiastically signed up might be fatigued, feel particularly unwell or simply be having a bad day when it comes to doing the recording.

“I’ve never done anything interesting. I don’t want to talk” Barbara tells me during a role playing exercise where I’m supposed to be practise-recording her discussing her life’s events. When she goes on to say she is too upset to talk about her past because of her daughter’s death (for the purposes of the exercise) I am lost for words, and I realise the degree of skill it takes to gently encourage someone to open up, and to know when it’s best to stop proceedings and go to make a cup of tea.

We also learn what to do if we’re asked to help with medication, which we don’t have medical training to do, and how to handle safeguarding issues that need to be signposted to the appropriate person within the hospice, such as the Volunteer Coordinator.

There is no doubt that the role of the hospice biographer can be tiring, and we are asked to think about self-care. How would we wind down after a hard day? Answers range from practising yoga and mindfulness to opening a bottle of wine and soaking in a hot bath. Barbara explains how she usually cycles home with tears streaming down her face as she processes the day’s emotions, before getting an early night.

Despite these challenges, when I talk to Barbara later she explains how deeply rewarding the experience is. “It is a huge privilege to be trusted with somebody’s life story” she says.  “They’re giving something of themselves to you, and they feel that you’re on their side when all else is against them.”

The Hospice Biographers charity is welcoming ideas for its monthly radio show We Remember Lives, particularly from hospices and staff who are doing something extraordinary, patients who would like to talk on air about their experiences, and hospices engaged with outreach projects with prisoners, homeless, Travellers and young parents. For more information contact Barbara Altounyan. The next edition will be broadcast on Threadsradio on Tuesday 19 from 2 pm – 4 pm.