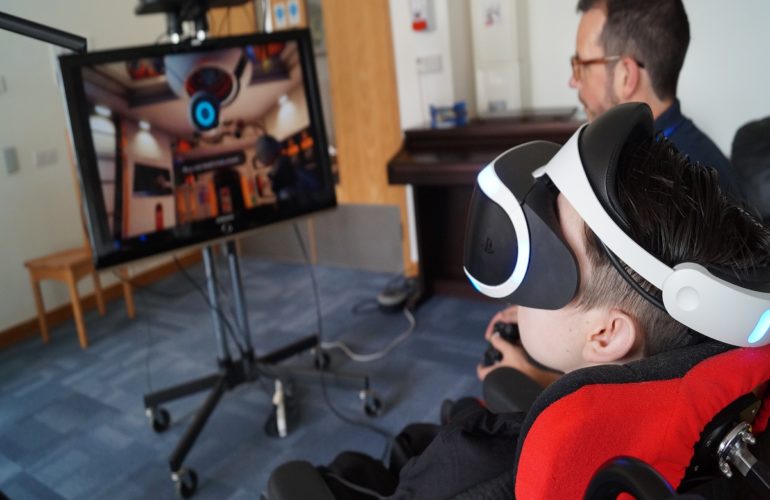 Lifelites donates technology and equipment to children in hospices across the UK, and has been awarded nearly £70,000 by GamesAid, the charity of the UK games industry.

The  technology enables young people with disabilities to travel to places they never thought they would go, and immerse themselves in experiences they might never have had otherwise, such as riding rollercoasters, swimming with dolphins or flying spaceships.

So far the charity has trialled virtual reality (VR) experiences at Jacksplace Hospice for young people in Winchester, and it has proved extremely popular. Now Lifelites is planning to take it to young people in other hospices across Britain.

One of the young people who has been able to use the VR at Jacksplace is Daniel. A fan of gaming, he often used to play on his Xbox, however due to the degenerative nature of his condition he has lost mobility in his hands and arms and can no longer hold the controller. The VR equipment has made it possible for him to continue playing, and helps him to spend time with other young people at the hospice.

“Daniel is very quiet, but the VR helps him socialise with some of our other young people. It brings them together and they are able to meet other people who have the same problems they do, but they can just forget about that and be young people playing games. Whenever we schedule time on the VR at one of our day services, we get so many people coming in – they love it, and we are so grateful to Lifelites and GamesAid for making it possible.”

“We were absolutely blown away to receive such an incredibly generous contribution from GamesAid yet again. With their support over the past six years we have been able to do things we could never have dreamed of. We have been able to change the lives of terminally ill and disabled children with this technology, enabling them to do things they never thought possible, and now we are looking at the next big thing in personal technology – virtual reality.”

To watch a video about the project, visit Virtual reality for children in hospices