Care “Magnolia House is a place to honour loss” - ehospice

“Magnolia House is a place to honour loss” 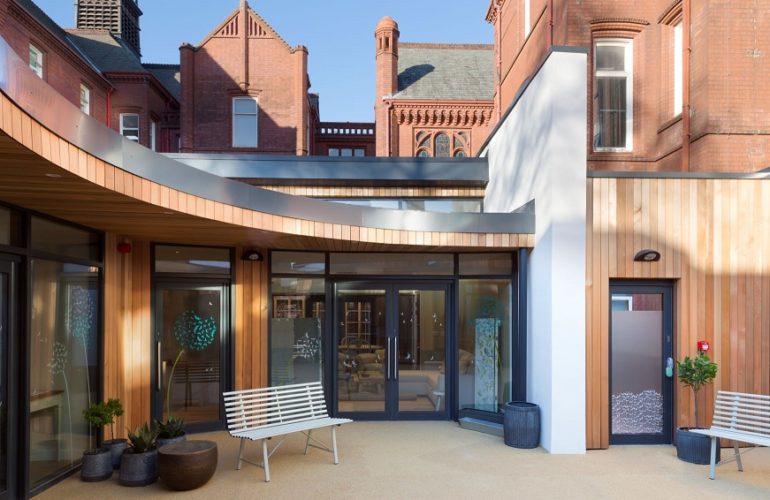 A facility located at Birmingham Women and Children’s Hospital is providing a safe space for families who have children with terminal conditions. Co-designed by the families themselves, Magnolia House is the first of its kind in the UK.

Named Magnolia House because of the surrounding magnolia trees, the site has a number of rooms including a large family lounge, a kitchen and smaller breakout rooms for private conversations. People can make food whenever they wish, use the rooms to make phone calls or have difficult conversations, and crash out on the sofas.

There is also a large garden, and the roof of the building is covered with grass and fairy lights so people staying at the hospital’s in-patient unit have scenic views from their windows.

The facility can be used by families for hours or years, depending on the condition of their child. It also offers end of life care and bereavement support.

“Things that happen in the house are important conversations about what’s happening to the child, things like memory making, organ donation and advance care planning” explains Nicki Fitzmaurice, Head of Nursing. “It provides short breaks and the chance to get away from the hustle and bustle of the wards. It’s a space that feels very different, we designed it with an empathic feel to try and manage emotions and be somewhere that almost feels like it can reboot you when everything feels really chaotic.”

“Sometimes families just come for a bit of peace and quiet away from all the extra-sensory stuff that goes on around the hospital” she adds.

When the time comes, some families choose it as the place for their child to die. “We might have children on our ITU who are intubated to help them breathe. When life is ending we can allow families to pick a time for that tube to be taken out, and they can do that here in the house” Nicki says.

Family members can come and go as they please. “Siblings are welcome, grandparents are welcome, even the dog and the cat are welcome. We can have up to 40 people here without a problem, whereas clearly in our hospital space is limited and it’s also not a great idea when the doors to the units keep beeping and opening.”

The main thing, Nicki says, is that it doesn’t feel like a hospital. “It’s really very beautiful and gives people something else to talk about. Sometimes you can be talking to families when things are pretty awful and they’ll say something like, “those door knobs are nice aren’t they? Where did you get them from?”

Having a building dedicated specifically to death and dying is important, because it’s about honouring loss, she says. “We’re not apologising for the spaces where death happens and loss is discussed – we’re celebrating them. We always used to borrow spaces for bereavement and loss, so you’d borrow a sister’s office or the play room, and you always had to give it back afterwards and it was never really suitable. Even when you try to create what you would perceive as a breaking bad news room, it normally had second-hand furniture like plastic chairs, plastic flowers, and a piece of art on the wall that has no resonance with anybody.”

Nicki and her team set about co-designing the house undertaking research with Birmingham University and visiting Maggie’s Centres. The project was funded entirely by charitable donations, including £750k from financial consultants Wesleyan Assurance.

Most importantly, the building was created by asking the families for their input on every aspect of the design. This included taking the families, doctors and nurses involved in bereavement and palliative care to the shops for them to try out furniture. “We asked them, “what would it feel like to have a difficult conversation in this chair?” And the families would say things like, “the arms of that chair feel terrible, don’t get that.” Even down to the shape and texture of the mugs, we were looking for something that soothed and comforted so nothing too awkward like an NHS standard cup that you can’t get your finger into, and nothing too clattery.”

“We got lots of feedback, for instance we heard there was nowhere for someone’s husband to sit when they were told their child was dying, or they just needed to see out of the window and there wasn’t one. When your fight and flight kicks in you need to know you can get out of somewhere. “

Art was also an important consideration, and not just to go on the walls. They worked with a local artist who is also a therapeutic consultant, and came up with an idea for a canvas that families can use to stitch images on. “We use this as a way of having discussions with people without putting them on the spot. So if someone doesn’t want to make eye contact or they just want to dip out for a bit, it’s a way for them to put their head down and start working on something.”

Support groups run regularly, including groups for baby loss, complementary therapies and sibling support groups that take place during school holidays. “Having the space for a brother and sister to recognise the pain that they’ve gone through is so important” Nicki says. “Often survivor guilt is a terrible thing – feeling that they’re never going to be as good as the brother or sister who died, it’s a really terrible phenomenon to have to live with.”

There are also monthly get-togethers for parents to share their experience of loss with others. “For some people it is really important to find somebody else or a place they can go to, and we found this in particular with the father’s group. A couple of people in there said we’ve saved their lives. To find a place where without your partner you can haemorrhage some of the pain, and where for maybe two or three hours a month you don’t have to be seen to cope, is really important.”

The project has been a great success, and they’re currently in the process of planning another house at the hospital applying the same principles as Magnolia House. “Our families say it’s beautiful, and that they love being here. There are lots of end of life experiences here that are very beautiful and very spiritual, and driven by the families because we’re not institutionalising them into the space.”