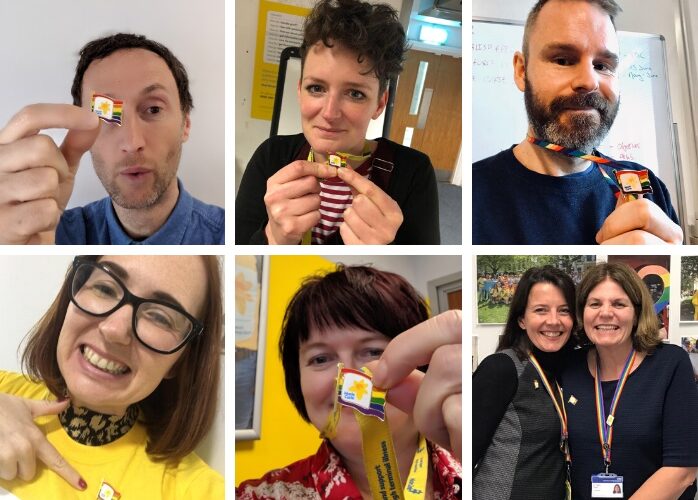 The Marie Curie Rainbow Pin will enable people using the charity’s services to know that they are welcome and safe to be who they are, as well as offering staff the opportunity to show their support for LGBTQ+ people who are at the end of life.

Staff and volunteers wanting to wear the new distinctive pin on their lanyards or uniforms must first complete a new bespoke e-learning module, developed by Marie Curie experts and in consultation with Stonewall.  The purpose of this training is to introduce and familiarise people with the principles of diversity and help them understand some specific LGBTQ+ language and issues.

Marie Curie’s own funded research shows that some people experience barriers to accessing palliative and end of life care and they may delay access to the support they need or hide their sexuality or gender identity while using palliative care services.  The charity says that the reasons for this can be complex but include anticipating discrimination when accessing health and social care services.

Matthew Reed, Chief Executive of Marie Curie, said: “Everyone regardless of who they are should be able to be themselves without fear of discrimination or judgement.  We want every part of Marie Curie to be a place where people who identify as LGBTQ+ feel accepted, respected and valued.

“The new Marie Curie Rainbow Pin is an important visible symbol of our commitment to improving the experience of LGBTQ+ people at the end of life, and forms part of our wider work on diversity and inclusion, taking on social injustices and inequalities where they exist.”

John, a gay man in his late 80s, was cared for at the Marie Curie Hampstead Hospice in London.  Glyn Thomas, one of the charity’s Senior Social Workers, shares the story of how he helped fulfilled John’s dying wishes.

“John was a man in his late 80s who had been living alone in a flat in Camden since his partner Graham died 20 years before. They had lived there since the 1950s. They had met during the second world war.  His friends had all died and he had no family that he was in contact with.

“John made it clear he wanted to die at home but for that to happen, we needed to do a lot of work. We got a cleaning company to declutter and clean his flat, and our Occupational Therapist came with me to order all the equipment and put a hospital bed into the lounge. I bought new bedding and went to a food shop to get some of John’s favourite pork pies.

“John went home, and the community team took over. I visited him several times with our community social worker, and he eventually had his wish of dying at home.”

“John had planned his funeral, and the same man who worked at the local funeral directors organising John’s funeral was the same person that had organised Graham’s funeral 20 years before. John had asked for Shirley Bassey singing a ‘House is not a Home’ to be played at both his and Graham’s funeral.

“Initially we had thought that nobody would attend his funeral. Our chaplain took the service and I delivered the eulogy. However, somebody from the Lesbian and Gay Switchboard attended as John had left money to them, and a woman who John had worked with in the 70s together with her husband. It was a lovely service and Graham’s ashes had been put in John’s coffin and cremated again, so they could be together.

“We all met up several weeks later. I went to the funeral directors and together we walked with John and Graham’s ashes to the beautiful garden next to their flat. With our Chaplain and John’s friend from work, we sipped champagne and scattered their ashes on a beautiful, sunny June afternoon. John had asked me to scatter his ashes in this garden which had clearly meant so much to John and Graham when they lived here for 40 years.

“It’s wonderful to be able to wear the new Marie Curie LGBTQ+ pin with pride, particularly as I am currently delivering LGBTQ+ training to the hospice. One of the issues we focus on is how we can encourage more people from the LGBTQ+ community to access palliative care. Talking about the history of LGBTQ+ in the training has given me an opportunity to talk about John and how things have changed since the 1940s when he first met Graham.”

Alongside the launch of the new pin, the charity has developed a new booklet aimed specifically at LGBTQ+ communities and explains the care and support that’s available for people living with a terminal illness and how they can plan for their future care and practical needs.  The booklet is free and can be ordered from the Marie Curie website.