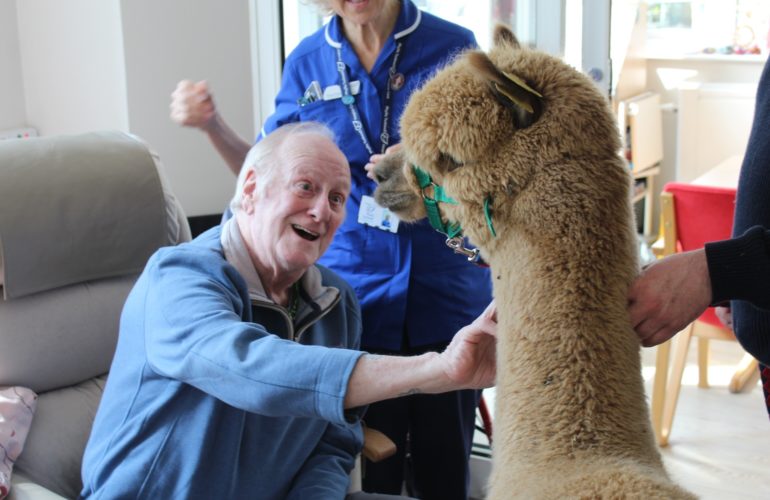 Dogs, donkeys, rabbits, Shetland ponies and alpacas – these aren’t just the inhabitants of a local farm, but animals who take on the roles of therapists to visit patients in hospices.

Research shows that stroking an animal can be calming and reduce blood pressure for short periods of time, as well as releasing endorphins, the chemicals that are able suppress our response to pain.

Animals can be greatly missed by patients when they are admitted to a hospice or become too unwell to care for a pet, and their visits can bring them an immense amount of enjoyment. While most hospices let friends and relatives take cats or dogs to see their owners, visits from much more unusual animals are not out of the ordinary.

At Phyllis Tuckwell Hospice Care in Surrey patients have been visited by rabbits, donkeys, owls, guinea pigs and even alpacas. Local farm owners often offer to bring their animals along to be petted by the patients, who enjoy stroking and admiring them.

“Their presence brings a distraction from illness for many of our patients, can reduce anxiety and stress, and may remind patients of pets they have had themselves in the past – although not many have ever owned an alpaca!” says Jen Barnes, marketing executive.

“We also organise regular visits from dogs and their owners from the national charity Pets as Therapy (PAT). The joy they bring is evident on the faces of our patients as soon as the dogs enter the room. And at Christmastime we welcome a festive visit from Mr Kipling the donkey, who is accompanied by a long-haired guinea pig named Morris.”

Treetops Hospice Care in Derbyshire receives regular visits from PAT birds and horses from Pony Magic Nottingham, an organisation that facilitates interactions between ponies and children with 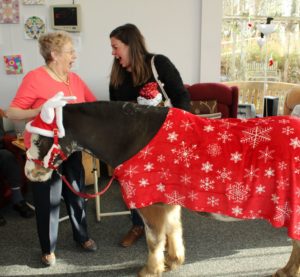 special educational needs and disabilities, people in nursing homes, and patients in hospices, among others.

Horses Mo, Harry and Daffodil have visited the hospice’s Wellbeing Space and have even appeared in fancy dress as reindeer at Christmas. They’re so well behaved the hospice doesn’t need to make any major adjustments for them, as the Wellbeing Space opens up onto 12.5 acres of grounds giving them plenty of room to graze and even sniff out the nearby rabbits. While they’re calling on patients inside the building they wear a special “nappy” to avoid potential mishaps.

Jade Almazan from Pony Magic Nottingham explains their benefits: “We provide pony interaction for all sorts of people and it lights them up when you go in the room with the pony. They bring calmness and peace, lots of smiles, laughter and fun as well.”

Lottie the dog is another very popular PAT visitor at the hospice. “It makes you feel calmer, petting animals” says Janet, a guest at the Wellbeing Space. “We’ve not had a dog for several years because it’s too much work now I’m ill. We’ve always had a dog and we really miss it. So I love having Lottie here. I think being in the vicinity of animals does calm you.

As well as relaxation, spending time with the pet therapists can have remarkable effects on patients.

Jess the Canine Concern dog is a regular face at the Day Therapy Centre and Inpatient Unity of St Barnabas Hospice in Lincolnshire. A rescue dog brought to England from Cyprus, her breed is 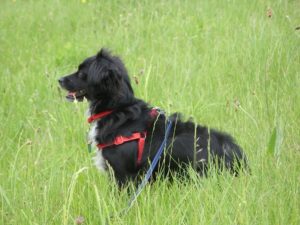 unknown, but she is thought to have some spaniel and pomeranian in her. Her temperament is very laid back, although she is very intuitive and able to pick up on people’s body language.

Jess’ owner Pat, who is also chaplain and volunteer at the hospice, explains the incredible benefits of spending time with her: “We find that Jess gives patients the opportunity to talk about something outside of their diagnosis, which can be very difficult at times. She brings a touch of normality to our service, which we find increases the therapeutic value of our treatments immensely.

“Jess has helped so many patients and families and I will always remember how she helped a particular patient in our Lincoln Inpatient Unit. The patient had moved to England from South Africa three years before she was diagnosed with a terminal illness and was really missing her dog, which was still in South Africa.

“Knowing this, I took Jess to see the patient, who immediately appeared more at ease. In the following days, the patient who was no longer able to talk much spoke to the nurses at length about Jess’s visit and it occupied much of her conversation in the week leading up to her death.

“Jess has also helped a patient who had become unresponsive. She put her paws on the frame of the patient’s bed and within a few minutes it became apparent that the patient was aware of Jess. The patient reached out to stroke her, saying the word “soft,” which was the first word she had spoken in some time.” 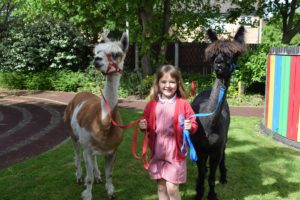 Dr Susan Salt, medical director at Trinity Hospice in Blackpool, introduced donkey therapy to the hospice after hearing of its use with dementia patients. They visit from the local Donkey Sanctuary and spend time with patients in their rooms.

Cats, dogs, horses, barn owls, cockatoos and a pygmy hedgehog called Florence also pop in regularly, and in the past the hospice has organised visits from cows for a patient who was particularly fond of them. Blackpool Zoo and SeaLife Blackpool are nearby, and have also brought a variety of animals in, including tamarinds, snails and milipedes.

“Sometimes you don’t need scientific proof about the benefit of a therapy; simple observation is enough” Dr Susan says. “The sight of a patient being greeted by their dog after a separation can be wonderful, and I have seen very ill patients get up and go to meet the donkeys.

“Serious illness can isolate and cause overwhelming feelings of stress, but I have seen those things dissipate the moment an animal – from a house trained donkey to a friendly hedgehog – enters the room.”