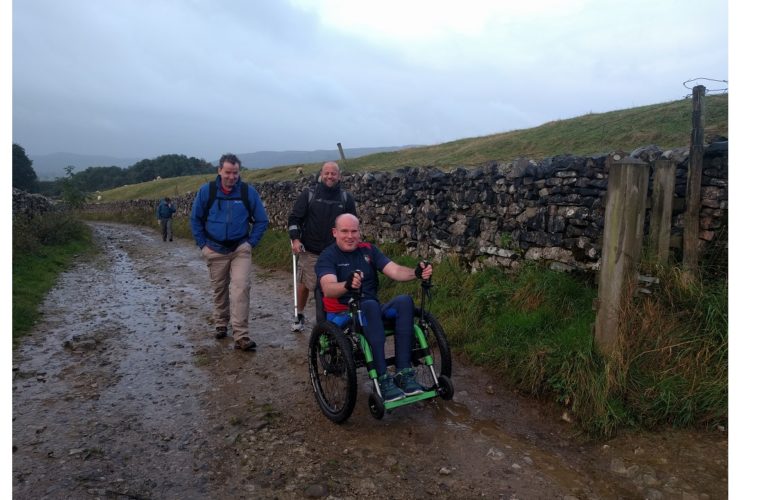 David, a patient at LOROS Hospice in Leicester, completed the challenge in a specially made all-terrain wheelchair called a Mountain Trike in 17-and-a-half-hours.

The 46-year-old was joined by the hospice’s CEO John Knight, who was part of a six-strong team of friends and volunteers who made the challenge possible.

“I still recall the ‘are you mad?’ look that I got back in March when I first suggested attempting the challenge in my Mountain Trike. ”

“It was not until the day before when I was driving through the valleys looking up at the peaks that the enormity of the undertaking was brought swiftly into focus.”

“To be brutally honest, I was just focussed on getting to the top and thinking this is not going to beat me.”

David was officially diagnosed with MND, a condition that damages the nervous system and often leads to muscle weakness, three years ago.

Speaking about the diagnosis he said:

“When I was diagnosed, I knew I had a choice, I could either sit down and let this happen or I could fight it. I am lucky that I have always had that fighting spirit in me.”

David said that he could not have completed the challenge without help from the team who assisted him across the peaks.

“Without those guys, it would not have been possible and I will be forever grateful to them.”

LOROS CEO John said that David’s challenge was the “most significant in terms of personal endeavour and character” that he has ever been involved with.

“David is truly a most impressive individual and it was a real privilege to be part of his challenge. To witness his amazing determination to complete it, while pressing against the elements, against fatigue and the increasingly challenging mountain footpaths is something I will never forget.”

“The Mountain Trike performed amazingly well over some pretty extreme terrain and I would like to congratulate David and his team for such a fantastic achievement in completing such a tough challenge.”

With support from both LOROS Hospice and the Motor Neurone Disease Association (MNDA) David has now raised more than £2,000 for the charities.