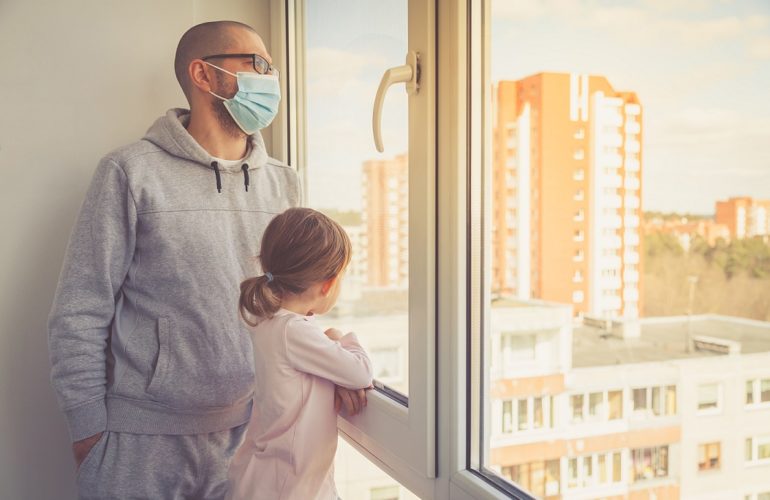 A survey published this week revealed that nearly half of the UK public have lost someone they know personally over the last year.

A higher percentage of Black, Asian and Minority Ethnic (BAME) respondents have experienced bereavement, with 68 per cent saying they had lost someone close.

The figures also show that the majority (56 per cent) have not had a chance to fully process their loss, and almost half (47 per cent) believe the public won’t be able to fully understand the emotional impact of the pandemic until it’s over.

Poppy Mardall, Trustee of Cruse Bereavement Care and Founder and Director of Poppy’s Funerals in London, has seen first-hand how many families have not been able to say goodbye the way they wanted to. “Many hospitals could not facilitate families and friends being with the dying person and many funeral directors were not comfortable facilitating visits after the death because of infection risks” she explains. “Crematoria and cemeteries had to restrict numbers at funerals and there have been multiple boundaries in place, for example families and friends not being able to touch or carry the coffin.

The importance of saying goodbye

“So many people literally won’t have had any chance to say goodbye. Seeing death and participating in rituals around dying and death helps our brains and bodies know that it has happened. We know from our work at Poppy’s how transformative meaningful goodbye rituals can be, and how crucial it is for family and friends to feel the experience they are having is theirs, and that it has been shaped by them. I think all of these lost opportunities to say goodbye meaningfully, and together, has caused trauma, and we will carry it for years to come.”

She hopes the pandemic has created a chance to raise awareness of how important these rituals are. “I believe and hope that these opportunities stolen from us have raised our collective awareness of and respect for ritual around dying and death – and I don’t just mean overtly religious, cultural or spiritual practices, although those are important and powerful too. I also mean gathering with a pint in a pub or a cup of tea at the wake and having a big cry about how sad you are your friend has died, and having a laugh as you share memories with others who loved and knew them.

“We need these moments and we need them together. I think this experience of being denied so much has brought home the importance of caring, supporting and advocating for people when they are grieving, in the knowledge that it will be our time soon.”

Reflecting on the lives lost

On March 23 the National Day of Reflection takes place, spearheaded by Marie Curie, marking one year since the UK’s first lockdown. A series of events throughout day will give the public the chance to connect with the people who have been bereaved, and reflect on the lives lost over the last 12 months.

There will be a nationwide minute’s silence at midday and across the UK, prominent buildings and iconic landmarks from Tate Britain to Welsh Parliament will light up at 8pm.

There will also be a series of free online talks and conversations featuring expert panels, bereaved families and celebrities throughout the afternoon, produced by the Good Grief Festival.

The day aims to tap into the nation’s empathy – as Marie Curie’s research showed nearly half of respondents believe the pandemic has made people more “empathetic and kind”.

“We have been confronted by our immortality on such a scale and in such a collective way” Poppy says. “But the collective nature of these challenges has brought a new level of empathy to the table. I think people are having more authentic conversations because so much has been stripped away. We’ve had a chance to get to know ourselves and each other more deeply. We’ve learnt about what matters and what we really need, which is each other. I think our hearts have been cracked open by this global experience.

“The painful way that Covid-19 has disproportionately impacted people of colour, alongside the death of George Floyd and the focus on the Black Lives Matter movement has put a spotlight on the unequal, unjust and systemically racist reality of our society, and how important it is we all work to level up. The data was there before Covid-19 but to see so many people dying as a result of this inequality I hope puts us in a position where we don’t lose momentum to change this.”

ehospice is grateful to hospiceUK for permission to  republish this article.