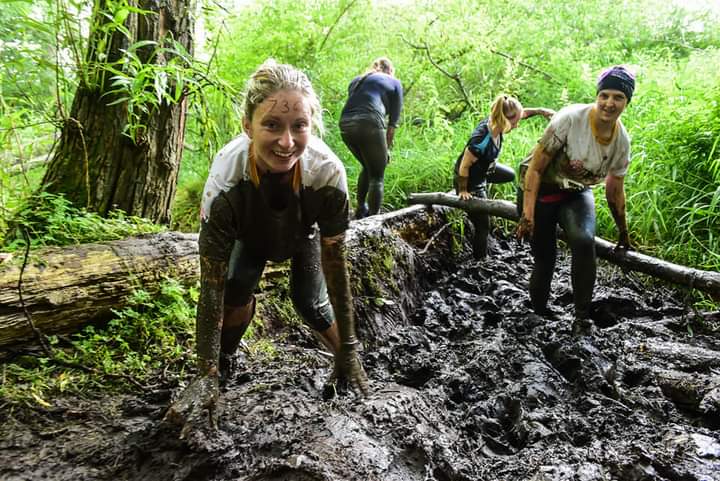 A DERBYSHIRE mum has been taking a run on the wild side in memory of her much-loved aunt – throwing herself into endurance trail events to raise funds for leading end-of-life charity, Treetops Hospice.

Roxie Mawbey, 33, from Walton-on-Trent near Burton, has raised more than £450 for the charity by taking part in gruelling 10k ‘Wolf Runs’ – tough events that involve mud, trails and obstacle running. Participants run, climb, jump, wade, crawl and even swim their way through a multi-terrain course.

Roxie, mum of Ellis, seven, has been taking part in the runs with her friend, Trice Davis, and dedicating her runs to her late aunt Emma Moore, who she says was “more like a sister”.

She says that she has been overwhelmed with the support and has nearly doubled her initial fundraising target.

“I hadn’t checked how much I had raised until after the last Wolf Run. Seeing how much my family and friends had donated, it just means everything,” said Roxie, who works at Measham Leisure Centre with Trice.

“Everyone knows what Emma meant to me. It’s just so nice that they would support me doing something that I wanted to do anyway, just for the fact that they know it means a lot to me, because it was Emma. I am just very grateful to them all, really. I think I am as mad as a hatter!”

Roxie explained how she had always been extremely close to Emma, who was “so much more” than an auntie. The pair used to talk every other day on the phone, and Emma “could not do enough” for Roxie’s son Ellis.

She said: “The age difference between me and Emma was not an awful lot, probably about 15 years, so she was more like a sister growing up. I used to go and stay with her when I was little. When I went to university at Nottingham, I actually lived with her for a while, with her being in Sandiacre.

“She just could not do enough for people, and she was so friendly. Most people have got a couple of close friends and a few acquaintances. She had got about 100 of the closest friends. They were family as much as we were. My mum and I still meet up with her friends.

“She was just amazing. In our family, we are still so close because we had Emma and we have got each other. Everybody says their family is amazing, but she truly was.”

Emma was first diagnosed with breast cancer when Roxie was 22. Initial surgery removed the cancerous tissue, but the disease came back a few years later. This time it had spread and was too advanced to treat. Emma had recently met the man who was to become her husband, and with her latest diagnosis, their wedding was brought forward to September 2015. She died in April the following year.

Roxie said that throughout her diagnosis and treatment, Emma always remained cheerful and utterly selfless.

“Emma was always happy. She always said that she would rather it had happened to her than to one of us who had children. She was very selfless like that. She said: ‘I’ve not got kids. I’ve got no-one dependent on me.’”

So, what made Roxie choose Wolf Run events to raise money for Treetops in memory of her aunt?

“Emma received care from Treetops Hospice and came for some lovely events to get spoiled, so this was my way of giving something back to the charity. I’ve always wanted to do a Wolf Run and if I set my heart to something, I will do it, and I just go hard core.”

“Our huge thanks go to Roxie and Trice for tackling these fun but muddy challenges for Treetops.

“They have raised enough money to help pay for four nights of Hospice at Home nursing care for a patient who’s at the very end of life, who’s chosen to die at home.

“With kind support from people like Roxie and Trice, we can continue to provide our vital care to even more people in the community.”

You can donate to Roxie’s fundraiser online here: https://running.treetopshospice.org.uk/roxanne-mawbey

Feeling inspired? Those who would like to fundraise for Treetops Hospice should contact the Community Relationships Team on 0115 949 1264 or head to the Treetops website for more information: www.treetops.org.uk