CarePeople & Places “Mum felt the love from St Catherine’s straight away, so did we” - ehospice

“Mum felt the love from St Catherine’s straight away, so did we” 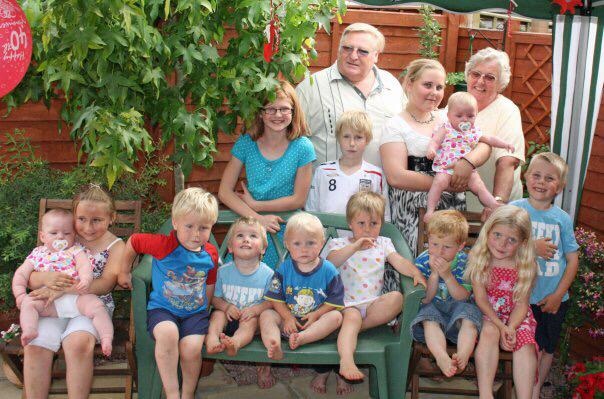 Sandy with her grandchildren

To mark Mother’s Day on Sunday 22, Donna reflects on the care her mother received from St Catherine’s Hospice in Crawley, and the difference it made to her and her family.

When I was growing up, my mum Sandy was just mum, but since my two sisters, brother and I have had our own children we’ve realised what she really did for us all the way through our childhood. She was amazing, and we never wanted for anything. Once we started having children she became the best gran as well.

Mum had the odd migraine, but she was never really ill, so in early 2014 when she started feeling tired and washed out it wasn’t like her at all. She couldn’t do anything and had lost her mojo. At first, she didn’t want to bother any doctors, so it was a while before she got some help. When she did it was a massive shock to find out that she had cancer. Doctors discovered it in her liver, but it’d already spread after starting in her lungs. Mum had no symptoms apart from feeling tired, so it was even more of a shock when we found out that she wasn’t going to get better.

Mum was given palliative chemotherapy to help alleviate some of her symptoms and make things a bit easier for her, but it made her very poorly. She was taken to hospital and went downhill quickly. None of us were expecting things to happen so fast and mum was very scared and upset. We all were. Seeing our mum like that was so hard.

Hospital doctors told us that she didn’t have very long left, so they contacted St Catherine’s. After a short wait we found out that mum could move to the hospice within a few days. She wanted to go there, and it felt like a little bright light in a very dark place to find out that the hospice could look after her.

None of us had experienced hospice care before. We didn’t have any idea what it would be like, so it was a scary time for us all. Like a lot of people, we thought St Catherine’s was a place where people went to die. We certainly weren’t expecting it to be the nice, happy place that it was, or for mum to get back home after being admitted.

When she arrived at the hospice the difference in her was immediate. She was made comfortable and the staff there were amazing. She hadn’t eaten for two weeks, but the hospice chefs got her eating straight away. They knew how to tempt her, and cooked amazing food that she really wanted.

When mum was admitted, a nurse asked her, “Where are your pyjamas?” Mum couldn’t dress herself by then so she’d lived in a hospital gown for two weeks. We rushed out to buy her some new PJs and she ditched her hospital gown. She was so happy to be wearing something that made her feel more like herself.

One of the biggest changes was that she wasn’t scared anymore. When she’d been in hospital, she’d needed someone with her all the time and didn’t ever want to be on her own. We fully expected to bed down at the hospice with her that first night too, but she told us, “I’m absolutely fine. Go home, get a good night’s sleep.” She felt the love from St Catherine’s straight away and so did we.

We could go out into the hospice garden with mum, we could use the family room, or we could sit by her bed. The hospice felt like a home from home, but with all the medical care that mum needed as well. Everyone had time for us too; from the receptionists to the nursing staff, from the cleaners to the clerical staff. They were so friendly and that made a huge difference during such a difficult time.

After a couple of weeks it became clear that mum wasn’t going anywhere – she’d got so much better. She was eating and sitting up, which was a wonderful surprise for us all. One day a nurse asked her where she wanted to stay going forward. She said, “Well, I’ll go home” so the hospice team made that happen.

An Occupational Therapist visited us at home to put in place all the equipment she needed. We were quite worried about her returning home because of all the wonderful care that she’d had at the hospice. We wondered how we could possibly provide that for her at home, but St Catherine’s team reassured us that they’d still be there every step of the way, and they were.

It was daunting having mum back at home at first, but it was important for her because her home was her haven. It was hers; it was comfortable, it was familiar. It was where she wanted to be. She could be the head of the household again, like she’d always been. She was back in control where she belonged and that mattered to her.

Being at home meant mum could have everybody around her too, her family, and her grandchildren, most especially, because she hadn’t wanted them to visit her at the hospice. Back at home she had an open-door policy. Her grandchildren would run in and out of the house whenever they wanted. They’d climb onto her bed, bring her sweets and snacks, and spend time with her.

The nurses and the hospice’s Occupational Therapist continued to visit mum to make sure she had everything she needed, and they were on the end of the phone for us day and night too, to reassure us if we had any questions.

During the time she was back at home we created special memories. My sister lives in Ireland but she moved back in with our parents that summer which meant mum’s 13 grandchildren were all together – it was amazing. We held a big barbecue, and mum and dad celebrated their 45th wedding anniversary with us all. Although mum was confined to her bed by then, we were still able to celebrate in our living room, and the fact that she was home with us was precious to us all. Mum needed us around too, and I’m so pleased that we were there for her until the very end.

After mum’s diagnosis, I gave up smoking, lost a lot of weight, and started running. Soon I’d caught the running bug, and I signed up for the London Marathon after she passed away. I wanted to run it because it was mum’s favourite marathon. She watched it every year on TV and loved it. I thought if I ran the marathon for St Catherine’s, I could raise money and give something back after they’d looked after her so well. I know she would have been so proud of me doing the marathon. She’d have been glued to the TV looking for my orange vest! And every single part of it meant so much to me knowing what she would think.

Losing mum was one of the hardest things that’s ever happened to me, but I’m so proud of what I’ve achieved in her memory and the money I’ve raised so other families can have the same incredible support we had. I know that’s what she would want too.