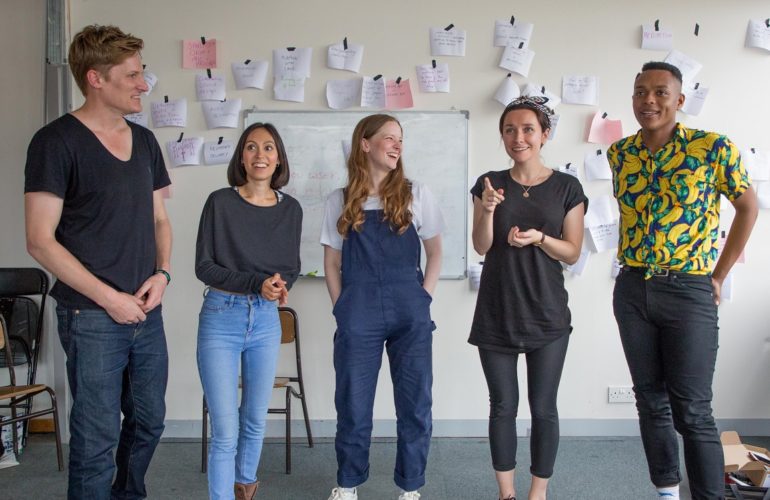 The cast of The Colours in rehearsal with Harriet Madeley, second from right

Harriet Madeley first had the idea to write a play about end of life care after reading a book her friend’s father had written whilst living with terminal cancer. “I was struck by the way his diagnosis had caused him to view life in a different way, and it really stayed with me” she says. “I then saw Dr Mark Taubert speak at the Hay Festival on the subject of palliative care, he introduced me to Dr Idris Baker at Ty Olwen Hospice in Swansea and the play was born – as soon as I got to Ty Olwen and walked into the day centre environment, I knew it was the right space for the piece.”

The Colours revolves around five people on a Welsh beach who share memories as they approach the end of their lives. The play uses exact quotes from the interviews Harriet conducted with the patients she spoke to, as well as their families, volunteers, staff and medical students.

“I learned that for many people, concerns around end of life aren’t what one might expect” she says of her conversations at the hospice. “Very few people that I met expressed fear around death and dying, but everybody expressed concern for their families – be that how they would cope after they were gone, or how to communicate their thoughts and feelings about death and dying.”

“A central concern of the play is how families cope when faced with this, and how we might be able to have those difficult conversations. I think the fact that people tend to be concerned with those they love rather than with their own situation reveals something quite incredible about human nature – that it tends to be our love and our compassion that is strongest at the end; not our sense of ambition or status.”

“I think this is an insight that people would benefit from having earlier on in life. My conception of hospice care definitely changed as well – I learned that it incorporates a huge range of things, and that the people who work in these environments are quite inspiring.”

When Harriet mentioned her idea for The Colours to director Max Barton, he jumped at the chance. “Here was the perfect opportunity to work on a piece that celebrates life, and seeks hope, love and tenderness within a subject that so often elicits sadness and terror” he explains.

“I’ve felt for some time that our generation is pretty bad at talking about death. Too often we avoid the subject entirely, but when we broach it, we do so frequently with fear, we are prone to morbid fetishisation of it in our pop culture and horror films, and we frequently find ourselves drowning in grief when surprised by it.”

As with Harriet, it was a book that altered his views on the end of life, in his case Sum by David Eagleman, a collection of 40 short stories about the afterlife. “It offered a completely different set of perspectives on life through the lens of death. Then over the past few years I’ve become more and more acquainted with the subject via the passing of people close to me, and then through a personal health scare, which developed out of a lifelong condition I have called EDS.”

The theme is also of personal meaning to Harriet, who has primary sclerosing cholangitis, a condition that causes scarring of the liver that can potentially be life-limiting, something which she says brings life into a sharper focus. “[The diagnosis] brought home to me the idea that you never know when you’re going to have to confront it. I’m lucky in the sense that I don’t have any symptoms at the moment, but there’s no cure for the condition and it could mean that I become very unwell while I’m still quite young. It has meant that I have been less inclined to waste time – I’ve found myself spending more time on work and relationships that mean a lot to me, because I don’t take life for granted.”

Ultimately she hopes The Colours will help people with life-limiting illnesses and their families. “I hope that it will be of benefit in the sense that it explores a range of responses to living with illness, and reveals the complexities and benefits of communication in these circumstances. I would also like for it to demystify hospice care and convey the warmth and beauty that it so often encapsulates.”

“Fundamentally the play is about how people continue to live with value and meaning when the shortness of their lives is brought into focus: a subject that is undoubtedly relevant to everyone on the planet, and which I believe – contrary to what people might expect from a play about death and dying – will be liberating to engage with.”

“With the production I want to help bring the voices of these real people to life in the most respectful and loving way I can” Max says, “and to meditate on an area that will affect everyone on the planet at sometime or other. What Harriet has put together has only served to further deepen my feeling that a true contemplation of death is the surest way to encourage a love for life.”

The Colours runs until August 17th at Soho Theatre in London. For more information visit The Colours