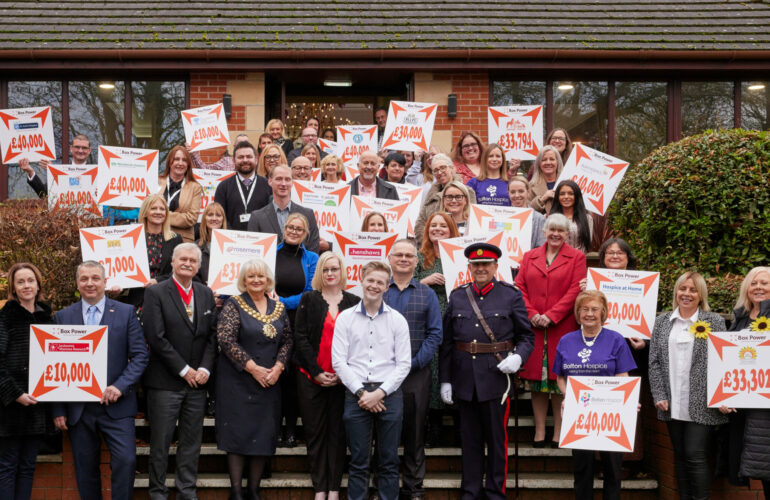 In total, the amount given away came to a staggering £800,000 across 24 charities

Over the course of the last year and a half, hospices across the North West have struggled to cope with the demands of the pandemic. But now, one social enterprise born-and-bred in Bolton, Box Power, has stepped up to make an incredible difference by donating all of its profits to good causes in the region.

In fact, after opening up applications for funding in June of this year, Box Power surprised the chosen charities by doubling the amount that each of them applied for, and providing funding to cover two years instead of just one. So, in total, a staggering £800,000 was given away by Box Power and split between 24 charities of different sizes, scopes and services, in order for the money to have the biggest positive impact possible.

Representatives from each of these hospices attended a special charity event at Brookfield Hall in Bolton on Tuesday 23rd November, organised by Box Power, to celebrate their hard work and achievements in being awarded this donation.

Box Power was founded by Bolton-based couple Corin and Tricia Dalby, after their son Benjamin was diagnosed with autism and the couple sold their large, multi-million-pound energy brokerage company to a PLC in 2012. In the time that followed, the couple were so blown away by the help they received from support networks and the local community that they felt inspired to give back. 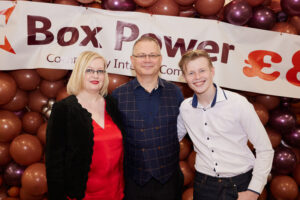 So they set up Box Power – the UK’s first not-for-profit energy consultancy, designed to give clients peace of mind knowing that they were not only getting the best energy deals, but their money was also doing good.

Having set aside profits from the last few years, and witnessing the devastating impact that COVID has had on charities over the past 18 months, Corin and Tricia felt it appropriate to utilise the accumulated profits and open up applications for funding back in June of this year. Over 200 charities applied and Tricia and Corin personally reviewed each one, as well as arranging in-person or Zoom meetings to speak with the charities directly before whittling the options down to 24 at the start of this month.

“It was a much more emotional process than I expected”, said Tricia, “There are so many amazing hospices and charities out there, and you feel so moved by the passion that each of them have for their cause and the people they help. We wish we could have helped all of them, but we hope that – through giving as much as we can to as many as we can across all different charity types and areas – the money can make a real difference.”

The special event saw charities come together to meet, chat and share their experiences, with a warm welcome from Corin and a speech from Eammon O’Neal, Deputy Lieutenant of Greater Manchester, and the Mayor of Bolton, Councillor Linda Thomas. Following this, Corin and Tricia made the exciting announcement that the amount each charity applied for would, in fact, be doubled and instead of lasting just one year, would in fact cover two years.

Selina Williams, Legacies and Trusts Team Leader at Hospice at Home in West Cumbria which enables patients to remain in their chosen place of care at end-of-life, said: “It was a tremendous privilege to be included in the event Box Power organised on Tuesday. It was one of the most exceptional events I have ever been to. It was about so much more than the incredibly generous gift which we, and the other amazing charities, received. It was about community, giving, recognition, tears and laughter.”

“We were over the moon to have been chosen to receive £20,000 from Box Power and we still can’t quite believe the surprise we received on the presentation day when Corin and Tricia announced they were doubling the donation to an enormous £40,000!

“It’s been a tough two years and this wonderful donation is a ray of sunshine after what has been a very difficult time. This donation will help so many patients and their families across Bolton and we can’t thank Corin and Tricia enough for the difference they have made.”

Stacey Kirkpatrick, Senior Fundraiser at Reuben’s Retreat, said: “This funding from Box Power will go towards finishing the remaining phases of our ambitious build project, including the addition of three fully accessible apartments for families to create special memories together in the time they have left. Because of their donation, we will be able to open the doors to this forever home sooner than we thought and, for that, we are so thankful to Corin, Tricia and everyone at Box Power.”

To congratulate the charities and join in the celebrations on social media, please use the hashtag: #boxpowered.

Box Power is a business like no other – founded in 2012, it is the UK’s first philanthropic, not-for-profit energy consultancy firm that uses its market expertise and buying power to broker great prices for its business clients, with all profits going back into the community and supporting good causes.

Its clients have found that its specialist team of experts, who share in its ethical values and offer a proactive style of account management, are a perfect winning formula and – more than that – a breath of fresh air in an industry that is so often filled with cowboy brokers. It provides its clients with peace of mind, knowing that they are always getting the best deals possible at the lowest prices while also assuring them that their decision to work with Box Power is making a positive difference in the world.