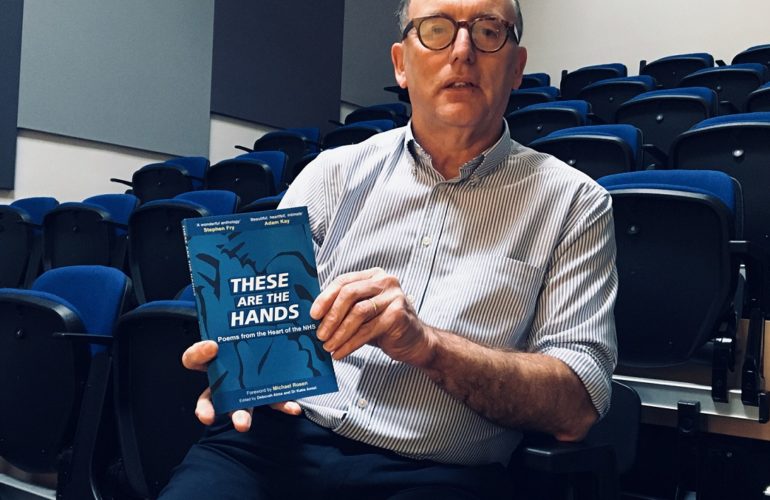 Mel McEvoy, who works for North Tees and Hartlepool NHS Foundation Trust, has written three poems called ‘He swims in the silence’, ‘Do your own dead come for you?’ and ‘Living in an empty house’ for ‘These are the hands’, a collection written by NHS staff and some of the country’s leading writers. The anthology offers a unique insight into the real experiences of the people at the heart of the NHS.

“Poetry catches the moments I see as rich in meaning” Mel said. “I’m very proud to have my poems included. It’s a book about the NHS where I have spent most of my working life. And it’s all for charity which is fantastic.”

All proceeds from the book will be donated to the NHS Charities Together COVID-19 Emergency Fund, which supports over 135 NHS hospitals, ambulance services, community and mental health services across the UK.

“The book shows the altruism of the NHS staff and touches on the many times they go beyond themselves to care” Mel said. “They’re drawn to, and have a desire to, do the right thing for the patient and society in general. The NHS is an important piece of the fabric that holds this nation together. I try to catch that with my poems.”

‘These are the hands’ begins with an introductory poem written by former Children’s Laureate Michael Rosen on the occasion of the 60th anniversary of the NHS. Actor and writer Stephen Fry provides a cover quote, saying: “‘A wonderful anthology to celebrate the NHS, which is itself the best poem a country has ever written.”

Mel has a long interest in poetry, and takes inspiration from his work in palliative care. “Working in end of life care has been a privilege and has had a profound effect on my life” he said. “I’ve been with people as they come to accept their oncoming death, I’ve seen how it affects them and how sometimes from that knowledge comes enormous strength.

“My poems may seem like they centre around end-of-life, but really they are about life. They explore the past, where people come from, their experiences and have been described as a ‘narrative of emotion’.”

Mel, who has a previous collection of poems called “An Emptied Space” published by Mudfog Press, lists Seamus Heaney and Charles Bukowski as two of his principal influences.

He recently completed a Master’s degree in Creative Writing with Distinction. His final project was a collection of poems centred around the lift at the University Hospital of North Tees and the people whose life stories are captured while traveling up and down to the wards. In an unusual twist, the lift itself is a sentient being and tells a fragment of the professionals’ life. Mel hopes this collection will soon become his second published work.

These are the hands’ costs £9.99 and is available from Fair Acre Press. All proceeds go to the NHS Charities Together COVID-19 Emergency Fund.