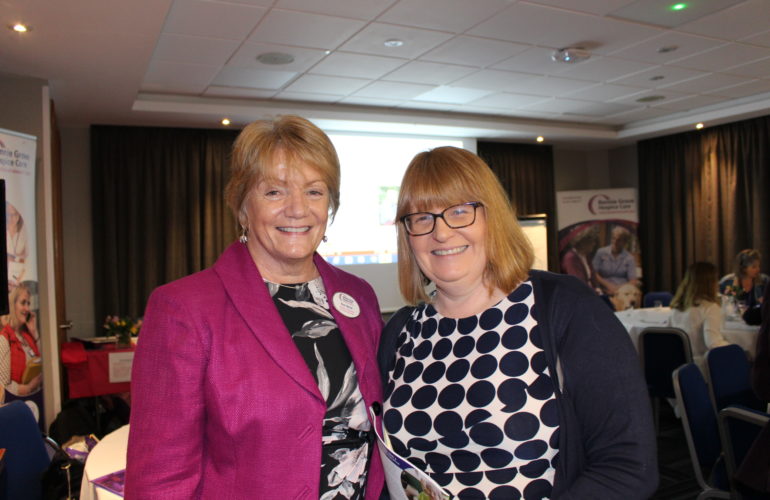 The annual Rennie Grove Nursing Conference – which took place earlier this month – has turned the spotlight on the future challenges of caring for older people and those with frailty and dementia.

The event was attended by more than 100 healthcare professionals including staff from hospices, hospitals, care homes and GP surgeries, and was chaired by Claire Henry, Director of Improvement and Transformation at Hospice UK, who used her introductory speech to set the scene by highlighting that by 2025 20% of the population will be over 65.

The keynote speech was given by Professor Malcolm Johnson, an academic gerontologist from the University of Bath, best known for his role in Channel 4’s hit series ‘Old Peoples’ Home for 4 Year Olds’.

He identified frailty as the major public health challenge of the 21st century, pointing out that more people are living for longer in better health but can often become frail. He highlighted that many of these people end their lives unsatisfactorily, and at great public cost, in hospital.  He identified the challenge for the future as finding a way to ensure that these people can die with dignity in a familiar place.

Describing himself as “a critical friend of the hospice movement” Professor Johnson said those with frailty rarely get hospice care, probably because they have a long, slow pathway to the end of life. He suggested that the way people die has changed, as most people die at a far older age than previous generations and this poses a challenge for hospices to work in partnership with care homes and other primary care teams.

Dr Catherine Evans, a Senior Clinical Lecturer in Palliative Care and Nursing from King’s College London and Sussex Community NHS Foundation Trust, also centred her speech on the rising numbers of people living for longer and the implications of this for services.

She suggested that dementia would soon replace cancer as Britain’s biggest killer and that as people live for longer, they often have more than one disease posing real challenges in providing care for them.

She talked of the need to keep these people out of hospital at the end of life and questioned the role of palliative care, suggesting that care provision should be based more on need than on diagnosis with more of a focus on maintaining capabilities and optimising quality of life.

Drawing on her experience as a Senior Clinical Lecturer working at King’s College London and St Christopher’s Hospice, Dr Caroline Nicholson spoke about frailty and the need to understand the role of palliative care in helping people to live – and die – as well as possible. She suggested that hospices have a big part to play in shaping society’s response to this challenge as they have a good reputation and are trusted by the community.

Sarah Russell, former Head of Research at Hospice UK, then shared her belief that it is not possible to “control the chaos” when caring for people with dementia, but that the care environment is really important.  Referring movingly to her own experience of caring for her mother who has dementia, Sarah outlined the importance of avoiding sensory overload and sticking to normal routines as well as focusing on what they can do and retaining the person.

Dr Karen Harrison Dening, Head of Research and Publications at Dementia UK, outlined that people with dementia often have other conditions which are not recognised and treated as they would be in someone without dementia and identified that their carers are a vulnerable group who need support.

Rennie Grove Hospice Care’s Chair of Trustees, Professor Stephen Spiro outlined the research carried out by the charity into the value of their overnight, responsive hospice at home care.

The results of the research showed that the service was valued, cost-effective and that it was successful in preventing emergency calls and admissions to hospital. He concluded by saying that end of life care is the only part of the healthcare system that is charitable and that hospices should push for more funding.

The day rounded off with a speech from Sarah Burnard from St Joseph’s Hospice on Compassionate Communities who used entertaining examples of successful initiatives in engaging local communities to deliver support to others in the community,

Commenting on the event, Sue Varvel, Director of Nursing and Clinical Services at Rennie Grove Hospice Care said she hoped more partnerships would emerge from conversations started at the conference.

“We were delighted with the thought-provoking and sometimes challenging presentations at this year’s conference,” she said. “The issues raised were highly topical and relevant to everyone working in the field of end of life care and it is really valuable to create these opportunities to take a step back from our busy day jobs to recognise and debate them.”

To find out more about Rennie Grove Hospice Care, please go to www.renniegrove.org.