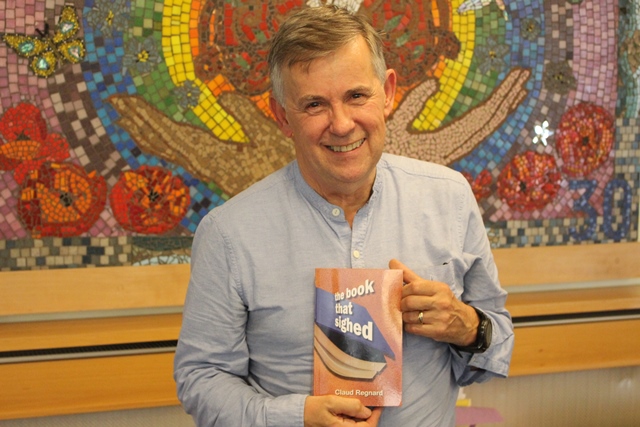 A former consultant who worked at St Oswald’s Hospice, Newcastle, has turned his hand to storytelling by putting pen to paper and writing his debut book which he hopes will help raise money for the north east charity where he worked for nearly three decades.

Claud Regnard, a Consultant in Palliative Medicine who was the first doctor at St Oswald’s when the charity opened in 1986, recently self-published ‘The Book that Sighed’ which is a collection of short fictional stories focusing on the themes of hope and optimism.

The stories include the reminiscences of a WW2 Air Transport Auxiliary pilot, a teenager intrigued by a library and the tales of a quiet Scottish loch.

Claud explained: “Writing has always been something of interest to me and I’ve been particularly interested in language and its structure since I was a student. Having written lots of medical texts such as journals throughout my career, writing for entertainment demanded an entirely different style of writing.

“Although I began writing the first story some years ago, retirement has afforded me the gift of time and the process of writing has definitely become easier as I’ve progressed. The theme of hope runs throughout all of the stories in some capacity and I think working in a hospice taught me a huge amount about hope, not least that everyone has the capacity to be hopeful, whatever the circumstances and of the difference it can make.

“My stories are inspired by some of the wonderful people I’ve met and the incredible life experiences they’ve had. If the book serves a purpose then I hope it’s to entertain, make the readers smile and to help raise some money for St Oswald’s.“

James Ellam, Chief Executive at St Oswald’s, said: “We’re delighted Claud has chosen to donate over 200 copies of his book to St Oswald’s to help us raise money which will go straight back into funding the services which Claud worked so hard to provide whilst he worked with us.

“Claud’s book is an eclectic mix of fascinating stories seen through the eyes of intriguing characters and is a thoroughly entertaining summer read.”