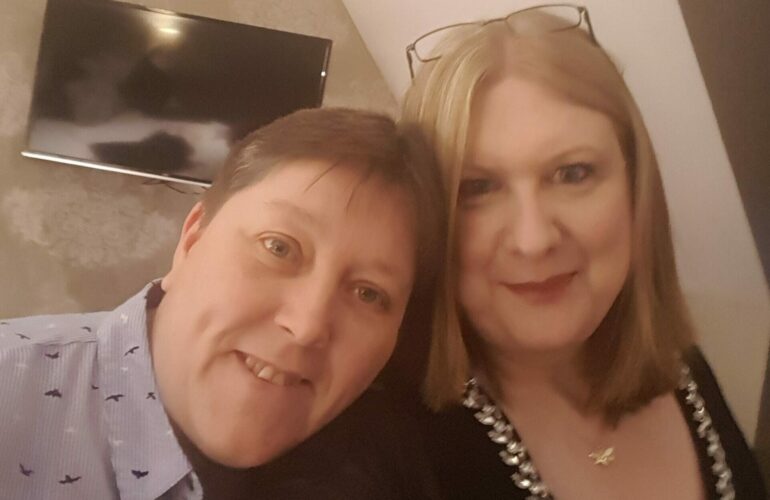 They discovered that the intensity of grief was high for both groups, however, bereaved people who were in a same-gender couple had, on average, significantly higher levels of psychological distress, which was described by the researchers as including low mood, poor concentration and sleep, and low self-esteem.

Poor mental health outcomes after bereavement for LGBTQ+ people may be attributed to services that do not meet their needs, or people accessing services late due to fears of discrimination based on historic experiences of health and social care.

Published on 27th May in the journal Psychological Medicine, the researchers conclude that clinical and bereavement services should refine screening processes to identify those at risk of poor mental health outcomes after partner bereavement and be alert to the increased risks to LGBTQ+ people.

When Michele Chilver’s wife, Terri, died in March 2020 she struggled with poor mental health, which was exacerbated by the first pandemic lockdown. Michele, 54, from Hull, said:

“Once Terri had died, I got a letter from the oncology and health centre saying they couldn’t support me anymore because Terri had passed away. I cried when I got that letter because I thought I’d just started to get some support for me, and now Terri had died I wasn’t eligible. I was alone, lonely and very vulnerable. I couldn’t go on like that. I did eventually find help from Marie Curie.

“I don’t think people realise how excruciating it is for the partner. I’d spent 15 months being the one that keeps life running as close to normal as possible. I became a nurse, pharmacist, cook, cleaner.

“As a gay couple, Terri and I didn’t see ourselves represented in healthcare in lots of ways and that does have an effect. Even when I finally found support, I was nervous about calling. Some people still have very interesting views about same sex relationships, so anything that breaks that perceived ‘strangeness’ of being gay is important.

“People already see barriers in reaching out for help with their grief, but sexuality doesn’t need to become an additional barrier to that.”

Dr Katherine Bristowe at King’s College London who led on the study, says:

“Losing the person you planned to spend the rest of your life with, irrespective of gender or sexual orientation, impacts on every aspect of your life. But for LGBTQ+ people there is also a greater severity of psychological distress, adding to the burden of their grief.

The legacy of exclusion, stigma and discrimination experienced by LGBTQ+ people in the healthcare system means people may avoid reaching out for help, or it is possible that providers of bereavement and mental health support are not recognising those who are most in need.”

“It’s heart-breaking when we receive calls from people who have been struggling alone after the death of their partner. By this time, many people’s mental health is bad and some are at crisis point having spent months feeling isolated. People will always grieve for those they love. That is natural and we cannot stop that. But more must be done to get extra help to those who need it, and to proactively help people at a higher risk of mental health issues resulting from a bereavement.

“No one should have to hide who they are or be made to feel that they are alone because of who they love. If people feel able to take that first step then we have trained bereavement support teams who you can speak to. Please search ‘Marie Curie Help’ for our contact details.

“Marie Curie is committed to ensuring everyone gets the best possible end of life experience and bereavement support. As a nation, we cannot be silent about inequity.  Our charity, our sector and our society need to work to tackle the issues identified in this research. We all need to work hard to ensure end of life care, bereavement support, and all health and social care spaces, are open, accessible and welcoming to all.”

This study was carried out across England and Wales. The research team conducting a survey with bereaved people six to ten months after their civil partner or spouse had died. In total, 233 same-gender partners and 329 different-gender partners were surveyed.