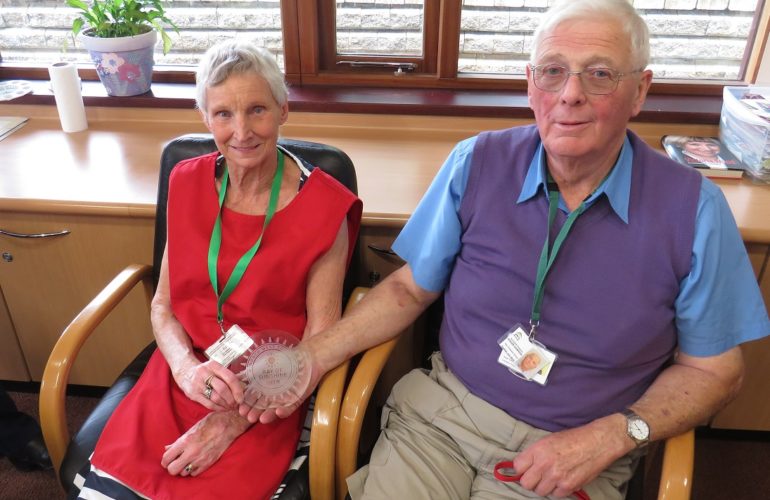 Carole and Roger Dawson with the Ray of Sunshine Award

Volunteers at Springhill Hospice in Rochdale have received the Queen’s Award for Voluntary Service, the highest award a voluntary group can receive in the UK, as well as BBC Northwest’s Ray of Sunshine Award.

The award recognises the work of the hundreds of volunteers that work in the hospice’s chain of retail shops, the hospice itself, maintaining the gardens and serving customers in the coffee shop.

It was created in 2002 to celebrate the Queen’s Golden Jubilee. This year the winners are very diverse, including volunteers helping people overcome mental health problems through sport, volunteers using caravans as mobile cafe/information centres in geographically remote locations, and a group mentoring children who have a parent in prison.

Volunteers John and Jacqueline Ashworth attended a garden party at Buckingham Palace along with other winners. Springhill representatives will be going to Gorton Monastery in August to receive the award.

“I am delighted that our volunteers have been recognised in this way, for all of the hard work they undertake within the Hospice and the gardens, our shops, the coffee shop and in our patients’ own homes. Congratulations to every single one of our volunteers, they should all be feeling incredibly proud of what they have achieved.”

Meanwhile Carole and Roger Dawson have won the Ray of Sunshine award after their daughter Hazel nominated them.

The Ray of Sunshine award was created in honour of BBC Northwest presenter Dianne Oxberry, who sadly passed away earlier this year. The awards have been presented to those who have helped others, their community, or just generally lit up the lives of others around them.

“It is so lovely that Roger and Carole’s daughter Hazel has nominated them for this special award. It’s been quite difficult keeping Hazel’s nomination a secret. Our volunteers are so special to us, whether they work within the Hospice itself, out in the gardens, in our retail departments, or in the community in patients own homes. Our Hospice simply would not survive without our wonderful volunteers”.