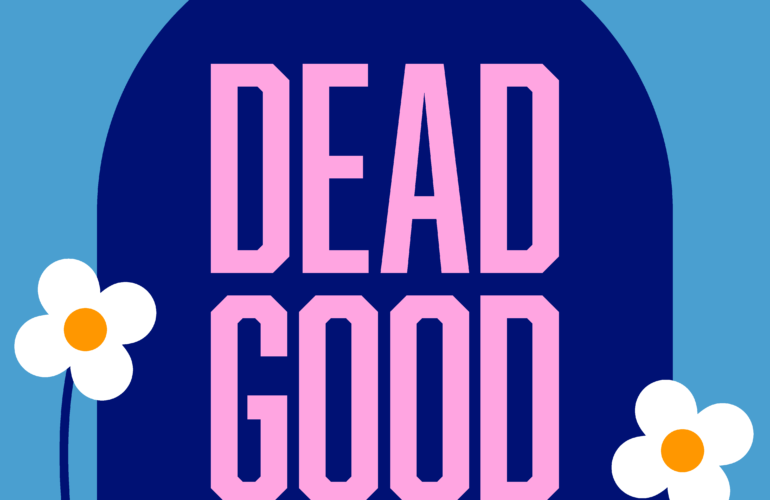 One argument often made for why more people don’t experience good end of life care is that too many of us are afraid to talk about death and dying. With its brand new podcast Dead Good, St Christopher’s is furthering its mission to expand the conversation about these national taboos.

With tales of disastrous funerals, dreams of spending the last week of their life eating nothing but donuts and a request for a Viking-style funeral, the six disarmingly open guests take listeners on a fascinating journey, sometimes to unexpected places.

The thoroughly engaging, six half-hour interviews with fellow writers, comedians and performers, are a carefully crafted combination of comedy and candour in the hands of host, the multi-award winning comedian and writer Sajeela Kershi. All of the guests share with Sajeela their deeply personal experiences of the death of family members as well as advice for others experiencing grief, and ways in which humour has helped them to cope.

Listeners will find it hard not be moved by broadcaster and former Time Out editor Tim Arthur as he recalls the long illness and subsequent death of his wife, aged just 28. Equally, it’s tricky not to laugh out loud as he describes playing totally the wrong song at her funeral or when writer and actor Sudha Bhuchar tells how the hearse was double booked for her mother’s funeral.

First encounters with death, the effect of the site of a coffin, guilt and the lengths some people go to scatter a relative’s ashes are just some of the huge range of topics Sajeela invites Tim, Sudha and the other four guests including comedian Steve N Allen and actress Evelyn Lockley to explore.

As well as finding all six episodes engaging and entertaining, St Christopher’s hopes to engage a new and wider audience in thinking and talking about death, dying and loss.

Sajeela says: “I was delighted when St Christopher’s approached me about Dead Good.

Death is part of living and yet we are reluctant to talk about it. However, like many other comedians who’ve experienced bereavement I’ve also talked about it in my own work.

Yes, Comedy & tragedy go hand in hand. In the darkest times laughter can be a welcome release along with the tears.

What I’ve learnt from this project is that no matter what your background sharing one’s stories or experience of death and grief can be cathartic and connects us as humans. My guests may be in the public eye, but each episode is compelling and resonates.

Dead Good is available via all podcast providers. St Christopher’s hope the more people listen, the more likely we’ll all be to planning for, delivering and experiencing a good death.