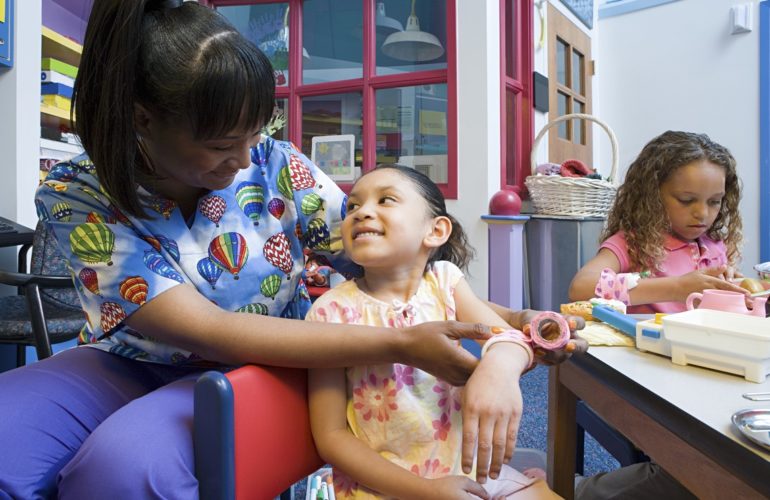 Two Staffordshire hospices are merging to protect the provision of children’s palliative care services in the region.

The Douglas Macmillan Hospice is integrating The Donna Louise Hospice for Children and Young People into its existing infrastructure to ensure children’s services continue to be provided throughout Staffordshire and South Cheshire, both now and in the future.

A joint statement released by the two hospices said: “The Donna Louise has consistently been one of the poorest funded hospices in the country, receiving just 9p of every £1 needed to run its children’s palliative care service from the NHS. In recent years, in common with many other hospices, the charity has had to spend significantly more on delivering care than it has raised from its fundraising and small NHS contributions combined.

“Previously the hospice had been able to make up the shortfall from its charitable reserves, but those reserves are now almost depleted. Despite the charity’s best efforts to reverse its fortunes, the children’s charity was facing a real threat to the future of its services.”

Simon Fuller, CEO of The Donna Louise, said: “The Donna Louise Children’s Hospice was founded so that no family in our area should ever have to face the death of their child alone – faced with having to drastically cut services, approaching the Dougie Mac for help was a logical move. It is impossible to understate what a devastating impact significant cuts to service would have had on families facing the unimaginable.

“Despite the tremendous goodwill and support that The Donna Louise has always, and continues to enjoy from the local community, the costs of providing high-quality children’s hospice care are rising every year. We have worked hard over the past two years, amidst an increasingly tough fundraising environment, to secure additional NHS funding and to cut costs, but these measures have not been enough to bridge the funding gap. A major change was therefore necessary in order to secure the future of our children’s hospice service.

“Much like The Donna Louise, the Dougie Mac is very highly regarded, delivering vital end of life and palliative care to the very highest of standards. In times of such continued economic uncertainty, amalgamation into the Dougie Mac is absolutely the right thing to do, not just for the people both charities support, but for the members of our community who make our work possible.”

David Webster, CEO of The Douglas Macmillan Hospice, added: “Dougie Mac is always striving to deliver the very best quality of care to meet the ever-changing needs of the local community. When a family has received the devastating news that they will almost certainly outlive their child, the idea that they might not have access to appropriate palliative or end of life care services was not a reality that myself or the board of the Dougie Mac was prepared to accept.

Mark Selby, Chair of Trustees at The Donna Louise said that job losses would be unavoidable, as some roles would no longer be needed following the integration of the two charities. “It is intended that those in family-facing roles at The Donna Louise will have their contracts transferred to The Douglas Macmillan Hospice under the TUPE process (Transfer of Undertakings Protection of Employment regulations)” he said.

“Unfortunately, all non-family-facing roles will be put ‘at risk’ of redundancy while a resource review and formal HR consultation takes place. We recognise how unsettling this news will be for staff who are potentially affected and deeply regret the inevitable upset this will cause. This was not an easy decision for the Board to make – but it is, without question, the right decision for the families we support.”

The hospices’ statement added: “The alternative was to cut a significant proportion of our care service and launch a £multi-million fundraising appeal. In such a tough fundraising climate, there were no guarantees that the appeal would deliver the funds necessary to save services in the timescales needed. Additionally the cost saving measures that would have been required were so significant, that they would have cut through the very heart of our vital services.

“If we had opted to take this route, it is impossible to understate what a devastating impact this would have had on the families we support.”

Care will still be delivered to children and young people at The Donna Louise Hospice while the two hospices undergo a period of review.