Storytelling in a different way – Bringing History to life 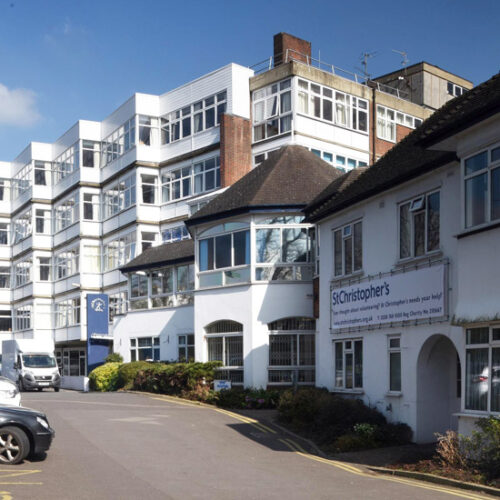 What attracted you to the job of Oral History Project Lead at St Christopher’s?

It was the fantastic opportunity to tell the story of St Christopher’s in a brand new way, using oral history. I was attracted by the chance to tell the story of both the main people involved in the hospice’s founding and progression, as well as the unknown stories from the community. That’s what oral history does and what’s brilliant and so vibrant about it.

The other element of oral history that excites me is that you really get a sense of a person through their voice.

What’s your dream for the project?

My dream for the project is to make it as accessible and engaging as possible. I want to tell St Christopher’s story in a way that resonates with everyone, people from all backgrounds and engagement levels, using a range of materials, both traditional and interactive. And that has been made possible thanks to the generous support of the National Lottery Heritage Fund.

What’s the scope of the project?

We have 12 interviews completed for the project already that provide a fantastic insight into the life and history of the hospice. I anticipate we’ll probably record somewhere between 50-100 in total, and these could be people closely connected with the opening of the hospice or perhaps volunteers working in the shops.

It’s my job to identify the stories, which ones we have and which ones we need to pursue. I want to build and to tell the complete story.

So, if anyone does feel like they do have a story about St Christopher’s to tell or a significant connection, now’s the time to speak and we would love them to get in touch with us at oralhistoryproject@stchristophers.org.uk.

What stories will you tell?

While there is a brief for the project and goals have been set, we can also be flexible and not feel confined to tell a single story. So if testimony comes in and it’s a story or theme that we knew nothing about then we can adapt and be responsive. We also won’t shy away from challenging issues as we want to tell the whole story – from periods of immense sadness in people’s lives through to intense joy in response to receiving great care and being able to cherish last moments with loved ones. We’ll be looking to capture stories from the medical perspective too, relating to advances in palliative and end of life care and St Christopher’s role in advancing care and humanity.

How will people be able to access the histories?

Crucially, once we’ve recorded the interviews, we’ll catalogue them in detail, according to themes and with timecodes, so that people will be able to search for specific areas of interest and just listen to that relevant excerpt of someone’s story.

We can use the interviews in so many different ways, across a number of platforms. Eventually we’ll curate an exhibition in the incredible new St Christopher’s CARE building. It’s a wonderful space and is one of the things that really drew me to this project. It will be amazing to really tell the full story of St Christopher’s and place it right in the heart of the hospice itself.

The technology available in the new building will also allow us to overcome some of the social distancing restrictions we face in a post-COVID world. Whereas we might have offered visitors headsets, that now won’t be possible. Instead we’ll use –directional speakers so we can tell individuals’ stories in specific places to create a natural flow and provide ports for people to use their own headphones.

That’s just one of the ways we’ll use these stories. We’ll also make full use of social media. So for example on Twitter we might just share just one question and answer from a story. We could use a slightly longer clip on Facebook and then on YouTube up to a whole hour. We will also create a dedicated space for the interviews in their entirety. That means people can engage on any level, depending on their specific interest, the time they’ve got and the level of detail they choose to go into.

And as soon as we start gathering people’s stories, we will look to use them across these different platforms. That way we can whet people’s appetite and hopefully encourage more people to come forward to tell their story and build interest leading up to the exhibition.

Can you give an example of a really good oral history project you’ve worked on previously?

I was lucky enough to curate an oral history exhibition at the RAF Museum at Hendon based around the life of Sir Alan Cobham who was responsible for bringing civil aviation to the people in the 1920s and 30s and inspiring many of the men who signed up to be pilots in World War II. We built the exhibition around interviews with many people who knew Cobham, his own archive as well as films, photographs and objects. Bringing all those things together we managed to return an extraordinary man to public consciousness and ensure his name will never be lost. That is the power of a good oral history.

What will be the legacy of the St Christopher’s Oral Histories project?

It’s a very important part of the project to ensure we preserve these recordings in a secure way, so they are available for generations to come. I also hope we’ll be able to create digital packages for schools so we can engage generations to come in the story of St Christopher’s and the modern hospice movement.

What are oral histories?

It’s not a lofty concept – it’s about collecting the stories of people involved in a chapter of history, whatever their role, and then keeping that history alive forever. The mix of voices helps provide real insight and means there’s a really diverse account of the history you’re trying to tell.

What are you hoping the project will achieve?

We want to capture the story of the early pioneers of the hospice and to get their voices and their stories by recording their recollections. Given that St Christopher’s started more than 50 years ago, a lot of them are now in old age, so now is the time.

We know that St Christopher’s played a big part in people’s lives, not just those people who were instrumental in setting it up and establishing the hospice as we know it today. It also touched, shaped and changed the lives of many people in the community. So, we’ll be looking to reach out to people in the local area whose relatives were cared for here in the early days, as well as people from across the country whose lives might have been touched by St Christopher’s.

It means I can help disseminate history, take it out of the lecture theatre and enable communities to feel a part of it and shape it.

What attracted you to the job?

I recently completed a degree in History and French and studied oral history as part of that. I’m also a local and have had relatives, including my great grandfather, cared for by St Christopher’s. So, when I saw it advertised, it just seemed like the ideal job for me. It means I can help disseminate history, take it out of the lecture theatre and enable communities to feel a part of it and shape it.

How will you go about collecting the oral histories?

We will recruit and then train volunteers to record the interviews, and, COVID-dependent, these will be conducted in person. The aim is that, once we start sharing them, this will then inspire other people to take part.

What will you do with the oral histories?

The aim is to gather as much new material as possible including interviews with both professionals and members of the community as well as artefacts and then display these in an exhibition in St Christopher’s Centre for Awareness and Response to End of Life. Visitors will be able to listen to clips, read transcripts and view the artefacts. The new material will sit alongside items from the archive we already have here, much of it relating to Dame Cicely Saunders and Dr Mary Baines. I’m guessing the many unopened boxes will prove a real treasure trove. As well as the exhibition the project will have its own website and social media presence too – to ensure that as many people as possible can access the content.